He chatted about the films that have shaped his career, why wife Kiran Rao doesn’t want him to change and the books he’s currently reading 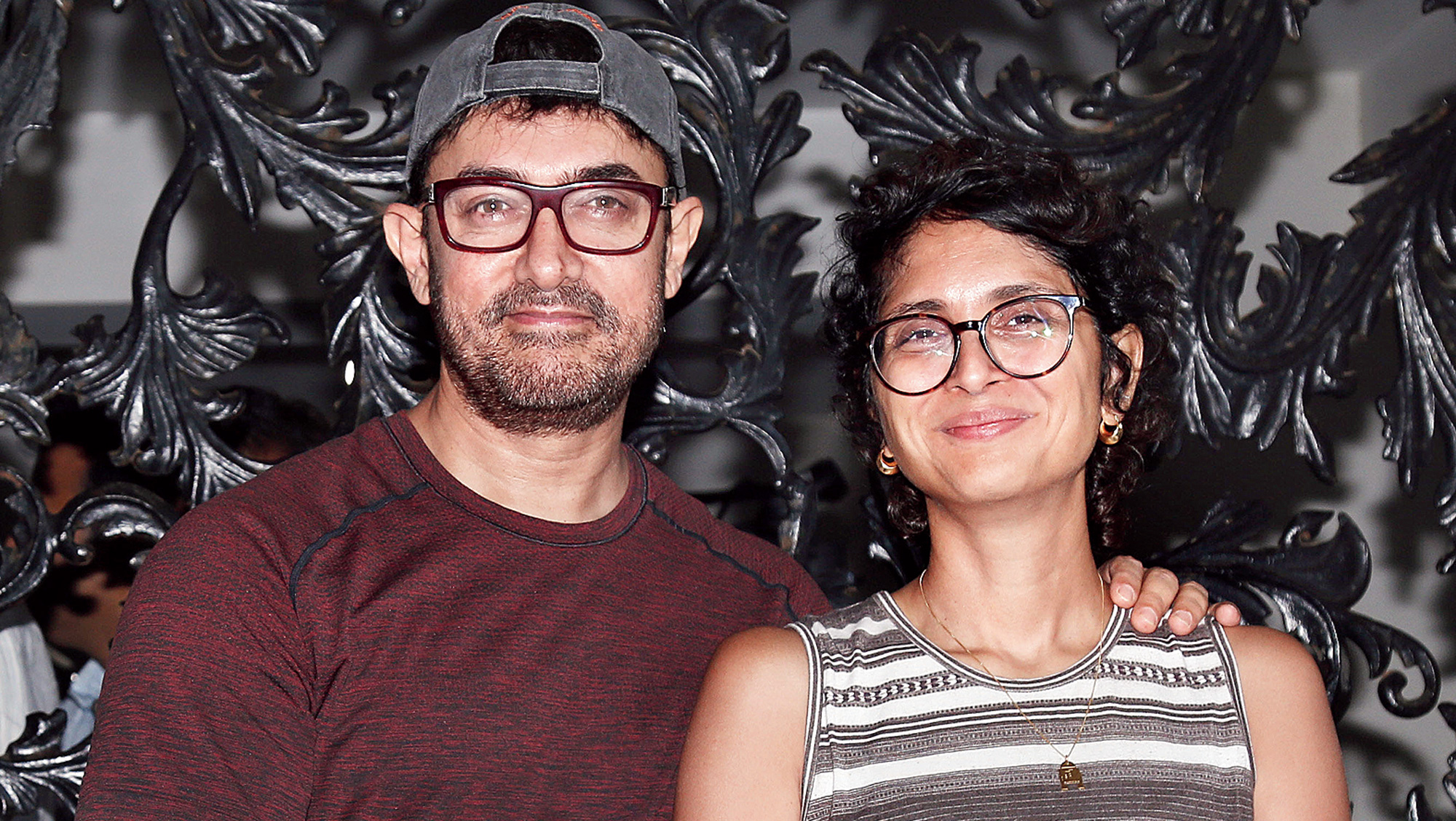 It’s become a tradition of sorts for Aamir Khan to spend the first half of his birthday with the media — cutting multiple cakes, posing for pictures and chatting with a handful of journalists. And his 54th birthday celebration in Mumbai last Thursday was no different. Aamir spent the morning at a football game with his youngest son Azad before interacting with the media. Aamir, who was last seen in the disastrous Thugs of Hindostan last year, took this opportunity to announce his next project — the official adaptation of the Tom Hanks classic Forrest Gump. The film’s working title is Lal Singh Chaddha and will be directed by Secret Superstar maker Advait Chandan. The film will be a co-production between Aamir’s production house and Viacom18 Motion Pictures.

In between the cake-cutting and going to pick up his son from school and taking him for a birthday treat, Aamir chatted about the films that have shaped his career, why wife Kiran Rao doesn’t want him to change and the books he’s currently reading.

Why did you decide to adapt Forrest Gump?

The writer of this film is (actor) Atul Kulkarni, and it’s a strange story. When we were doing Rang De Basanti (2006) together, he asked me one day what my favourite film was. And I said Forrest Gump. Exactly two weeks later, he told me he had a script for me. He had never written anything before, so I was surprised and asked him what it was about. He didn’t tell me anything but asked me to take out time to listen to it. A month went by and then another, because I was busy. Finally, just to get me to listen to it, he revealed to me that he had adapted Forrest Gump.

Apparently, after I told him Forrest Gump was my favourite film, he came up with a screenplay in the next 10 days. And that made me want to avoid listening to it even more! (Laughs) It’s Forrest Gump, and it was Atul — I was wondering what he must have written... I just couldn’t bring myself to take him seriously! But he would keep reminding me and finally, I heard it two-and-a-half or three years later. He would keep reminding me, so finally I gave in and decided to hear his story. It blew my mind.

After I liked Atul’s adaptation, we started the process of getting the rights of the film. It’s taken us eight years to do this. Obviously we couldn’t make the film without the rights. Advait (Chandan) will be directing it and we’ll be shooting this film across Delhi, Punjab, Himachal (Pradesh) maybe, mostly locations in the north. We’re still doing recce to find locations.

A lot of people think that you look like Tom Hanks.

(Laughs) Yeah, I’m compared all the time. I don’t know why, because when I see Tom Hanks, I don’t see many similarities. His energy is similar to mine and his eyes are similar, so you get the feeling more than the actual face cut. You know who told me this first? Gautam Rajadhyaksha, who was a still photographer and is no more. He had done an exhibition of his photos in LA sometime in the ’90s, four or five years after I started acting. When he came back, he said almost everybody in the exhibition asked him when he shot Tom Hanks! Even then I was wondering because he’s got curly hair and looks different.

It’s been two decades since you launched your production house, Aamir Khan Productions, to produce Lagaan. Since then you’ve produced nine films. Most production houses have four-five films in the making at any given point. Are you very picky about the kind of films you produce as well?

We are not in the business of making films. When we produce films, business is not our first agenda. Our focus is always on finding a script that excites us as a team. Like when Svati (Chakravarty Bhatkal) told us about Rubaru Roshni we got very excited. I told her that I will produce it. Her next question was, ‘Where will the documentary be shown?’ If I was a regular producer this would have been my biggest concern, along with how will we market the documentary. I told her not to worry and just make it because it was a fantastic idea.

At the beginning of your career, almost 30 years ago, in an interview you had said that you didn’t do 1942: A Love Story because you didn’t have the dates...

In these 30 years, have you regretted refusing any film? Not because it went on to be a big hit but because it shaped up differently from what you had imagined?

Nahin... I don’t have any regrets. For example, I was offered Saajan. I can’t remember which character it was and I didn’t think that it was my type of film. Sanju (Sanjay Dutt) and Salman (Khan) did it and it became a super-duper hit. Maybe if I had done that film, I would have ruined it. When I saw the Munna Bhai films, I didn’t think that I should have played the part, not that I was offered it. I was just happy to see a good film.

Have there been films that you wished you hadn’t done?

Oh ya! There have been quite a few of those at the beginning of my career. But I didn’t really regret them. The mistakes I have made in my career have made me who I am today. Every fall has taught me a lot. I am here today because of my successes but largely because of my failures. They have been the biggest learning for me.

When you started out in the ’80s and made movies like Raakh and Holi, you wanted to become a filmmaker. You weren’t very sure about being an actor. In these 30 years, you’ve directed one film — Taare Zameen Paar. Are you not itching to direct more?

When your children Junaid and Ira were younger, you were working on multiple films at the same time. Do you feel that you’ve managed to spend more time with Azad now that you’re only doing one film a year?

Actually, I was as busy then as I am now. I think I spent as much time with them as well... there isn’t that much of a difference. If I’m shooting now, I won’t see Azad for three-four months. Like when I was on an outdoor schedule for Dangal, I didn’t see him for months. My problem is I don’t even remember when I’m doing a film... I forget that I even have a family, a wife and kids. I get very absorbed in my work.

Don’t your kids ever get upset about this?

A little bit. Actually, Kiran said this to me a couple of years back, ‘You don’t really care for us’. But it’s important to understand that it wasn’t a complaint and just an observation. We have a room upstairs, like a study; it’s where Kiran and I always sit and talk. She was actually thinking and saying that they don’t exist for me, and so I asked her what she meant. And she said that they’re not in my periphery because my mind is always somewhere else constantly thinking of work, even when I’m physically there with them. She said she knows that I love them and she’s not sure she wants me to change, because if I did, I wouldn’t be the person she fell in love with.

What she said was the truth and she wasn’t even complaining, but I felt that it wasn’t right and that I should spend more time with the kids and with her. It’s not that I didn’t want to, it just never occurred to me. Since then, I’ve made it a point to get home at 6pm, and spend the next two hours with Azad and her. And then at 8pm, I start work again. But those two hours we spend together, I give Azad a bath, feed him and then I read to him. I won’t say I’ve managed to do it every single day, but I try and make it happen as much as possible.

There has been a flood of star kids being launched in the industry. Your son Junaid is also interested in movies but we’ve heard no news about his launch.

I think it’s all up to him. He should take charge of his life and make his own decision. I don’t want to make these decisions for him. He certainly has an inclination towards the creative world. He has studied theatre and right now, he is more interested in theatre than films. He is very bright. As is my daughter Ira.

You’ve always preferred books over movies. What are you reading right now?

That’s true. I prefer reading and don’t watch too many films. Right now, I’m about to start a book called Behave. I just finished reading Jerusalem. I also read an Agatha Christie book recently. I pick my books based on people’s recommendations. Sometimes Kiran will recommend something and I’ll read it. I like books that deal with history or anthropology. One of my favourites is a book called Sapiens, that’s on anthropology. My other favourite is one on biology, called The Lives of a Cell. That book is beautiful and should be in the Class 9-10 curriculum. It just broadens your mind and understanding of life. It makes you think about the decisions you think you’re making, but there are millions of different cells in your body who have different requirements and make you do different things. It’s a fascinating book.