Anil Kapoor posted a still from one his films also featuring the actor-comedian and wrote, 'Om Shanti' 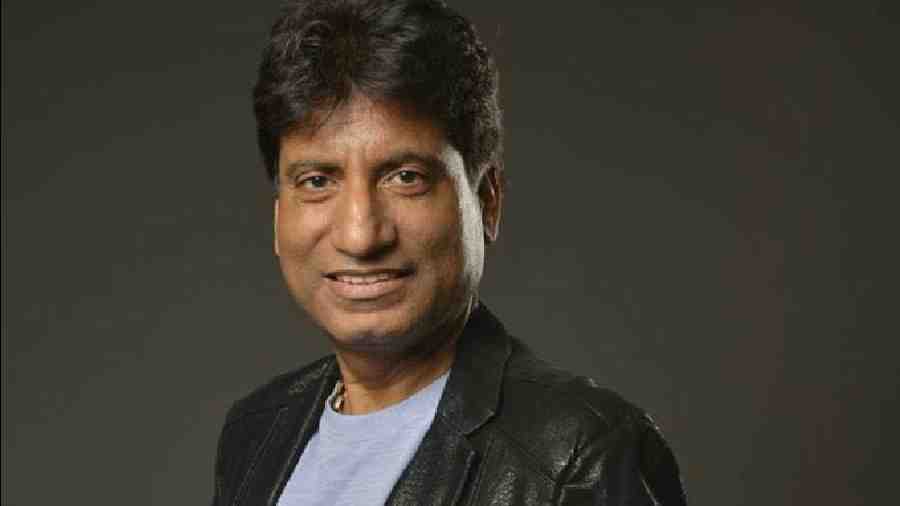 The demise of "funniest guy in the business" -- Raju Srivastava -- has left film industry colleagues heartbroken, with superstars Ajay Devgn, Hrithik Roshan, Anil Kapoor and Jaaved Jaaferi, among others remembering him for his genius.

Srivastava, who dabbled in movies and made a mark as a stand-up comic, died on Wednesday at the age of 58 after more than 40 days of hospitalisation at the All India Institute of Medical Sciences (AIIMS).

Devgn said he is saddened by Srivastava's death.

"In your lifetime you gifted us laughs & more laughs, on & off the screen... RIP Raju. Om Shanti. May the Almighty give your family strength in this hour of bereavement," Devgn wrote on Twitter.

In your lifetime you gifted us laughs & more laughs, on & off the screen. Your untimely demise makes me very sad.
RIP Raju.

Shanti.
May the Almighty give your family strength in this hour of bereavement

Hrithik Roshan, who worked with Srivastava in the 2003 film Main Prem Ki Diwani Hoon, also paid homage to the comic.

"Forever in our hearts. Rest in peace Raju Srivastava Sir. My condolences to the family," he said.

Forever in our hearts. Rest in peace Raju Srivastava Sir. My condolences to the family

Veteran actor Shekhar Suman, who had served as one of the judges on The Great Indian Laughter Challenge, remembered the comedian as a unique and inimitable talent.

"Raju was the funniest man alive. We will all miss him forever. I had the privilege and honour of judging him on many shows including 'The Great Indian Laughter Challenge' that catapulted him to unimaginable heights. Long live Raju!" Suman said.

Writer and stand-up comic Varun Grover described Srivastava as "the first stand-up comedian of Hindi", who took out humour and satire from the pandals of 'kavi sammelan' and mimicry.

"Raju Bhai was the biggest star of Lucknow Doordarshan in the 90s. There was no one better than him at finding the humor out of characters struggling with everyday difficulties," Grover tweeted.

"Raju Srivastava has gone! Hopefully the lesson that he leaves behind is that irreverence should be our default state. To laugh in the face of authority is a fundamental right. Alvida!" wrote director Sudhir Mishra.

Raju Srivastava, counted as among the most high profile and experienced comics in the country, was admitted to the AIIMS after suffering a heart attack on August 10 at a hotel in Delhi.

As an actor he featured in Hindi films such as Maine Pyar Kiya and Baazigar, the remake of Bombay to Goa and Aamdani Atthani Kharcha Rupaiya.

"Knew him from his very humble beginnings in show biz. You will be always remembered with a smile. RIP @iRajuSrivastava. Condolences to family and friends," he tweeted.

Anil Kapoor posted a still from one his films also featuring Srivastava and wrote, "Om Shanti."

"Deepest condolences to the family and loved ones of Late Raju Srivastava ji. May God bless his journey into the light #RIPRajuSrivastava," Kaur tweeted.

"Rest In Peace Raju. Thank you for all these years of fun and laughter," said Gupta. Sonu Sood shared a picture of Raju on Twitter and wrote, "RIP Raju Bhai (brother)."

Censor board chairman Prasoon Joshi tweeted, "Really sad to hear about Raju Shrivastava's unfortunate demise. A dear friend, a genius with an unmatchable insightful mind. It's such an irreparable loss for the creative world. Just heartbreaking .#RajuSrivastava #rajusrivastava @iRajuSrivastava."

Really sad to hear about Raju Shrivastava’s unfortunate demise. A dear friend ,a genius with an unmatchable insightfu mind . It’s such an irreparable loss for the creative world. Just heartbreaking .#RajuSrivastava #rajusrivastava @iRajuSrivastava

Filmmaker Madhur Bhandarkar wrote, "Saddened to hear the tragic news of Raju Srivastav's untimely demise. He made us all laugh with his amazing comic timing for so many years we have lost a gem. My deepest condolences to his family members & admirers. #OmShanti."

Navin Prabhakar, a popular comedian and Srivastava's co-contestant on The Great Indian Laughter Challenge, said he had the ability to induce connect with "living and non-living" things.

Raju bhai was connected with living and non-living things... This was a new dimension that he has given to all of us, Prabhakar told PTI.

Raju Srivastava passes away at 58