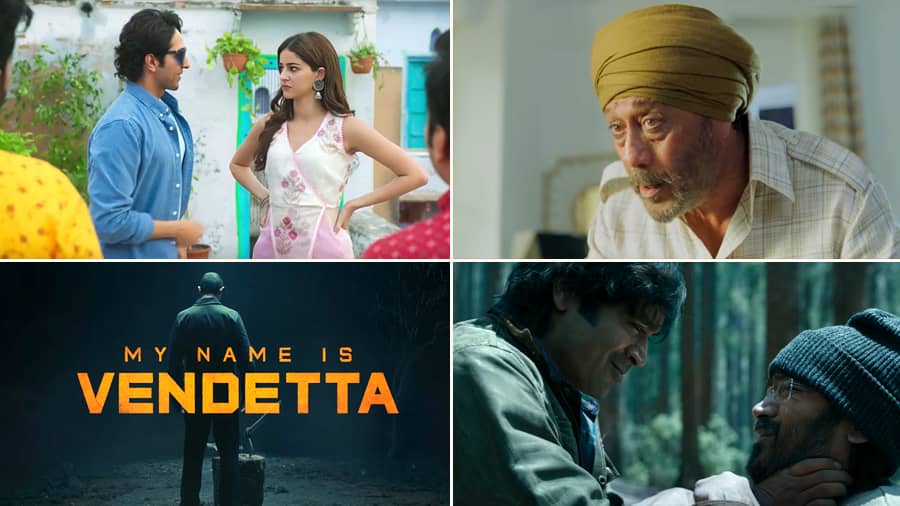 Balaji Motion Pictures has dropped the announcement video of Dream Girl 2, starring Ayushmann Khurrana and Ananya Panday, as a sequel to the 2019 blockbuster Dream Girl where Ayushman was cast opposite Nushrratt Bharuccha.

Dream Girl 2 traces the journey of Karam (played by Ayushmann Khurrana), a small-town boy, who falls in love with Pari (played by Ananya Panday). But the stars align against Karam—  in a strange twist of events, the boy turns into a girl, adding further chaos to the plot.

The teaser gives the impression that the movie is all about a deja vu experienced by two identical-looking individuals. We see two avatars of Dhanush — a simple man and a rugged-looking psychopath. The film also stars Indhuja Ravichandran, Elli AvrRam and Yogi Babu.

Naane Varuvean will hit the theatres in September.

In the trailer, we see Srikant’s (played by Pratik) life turns upside down when he bumps into a middle-aged ghost named Makhan (played by Jackie). The ghost claims to be Srikant’s grandson from a previous birth. Things take an even more comical turn when the ghost seeks Srikant’s help to meet his long-lost love. Apart from the leading men, the film also features Sharmin Segalad Divinaa Thackur.

Atithi Bhooto Bhava will be streaming on Zee5 from September 23.

My Name Is Vendetta

Netflix’s official teaser of its upcoming Italian revenge thriller My Name Is Vendetta, headlined by Italian superstar Alessandro Gassmann, has just come out. The movie is directed by production designer-turned-director Cosimo Gomez.

We get a glimpse of a dangerous man (played by Gassmann) in the teaser. The official synopsis reads, “After living in the shadows for years in an undisturbed Northern Italy town, a former organized crime sicario and his daughter ignite a revenge heist after his enemies come back to hunt their family.”

My Name Is Vendetta will arrive on Netflix on November 30.

The Lal Singh Chaddha actress shared the poster on her Instagram handle with the caption “EK CHUP ( One Silence ) Presenting the poster of my upcoming short film. A small piece of a strong social message on Shadow Pandemic.”