'I don’t believe in retakes... for me, in life and on set, there is no take two’ 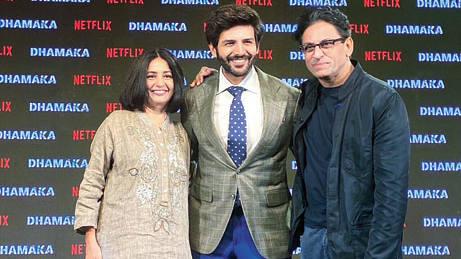 Ram Madhvani (right) with wife and co-producer Amita Madhvani and his Dhamaka leading man Kartik Aaryan at the trailer launch of the film last week.
Sourced by The Telegraph
Priyanka Roy    |   Published 30.10.21, 02:15 AM

Ram Madhvani, the prolific adman who has given us Neerja and Aarya in the last five years, now directs Dhamaka, with Kartik Aaryan in the lead. The thriller with a ticking time-bomb premise — the threat of a Mumbai landmark being blown up even as a news anchor (Kartik’s Arjun Pathak) is held hostage — unveiled its gripping trailer last week. On the sidelines of the launch at Mumbai’s Taj Lands End, we chatted with Madhvani on Dhamaka (that streams on Netflix from November 19), his reason for picking Kartik as his leading man and the International Emmy nomination for Aarya.

You are possibly one of the rare people who was on pause before the pandemic and then went into working full-throttle. You did the post-production of Aarya during the first lockdown and then released it, followed by the shoot of Dhamaka that took place entirely during the pandemic...

Age! (Laughs) On a serious note, I have been wanting to do this kind of work for so long. In a way, I am happy it didn’t happen to me 20-30 years ago, that it’s happening now. There seems to be a certain innings that God has given me and I am right on the pitch, and I hope I don’t get back into the pavilion soon.

Kartik Aaryan as Arjun Pathak in Dhamaka, streaming on Netflix from November 19.

Everyone knows that you follow a pretty unconventional and intriguing process of film-making. Could you elaborate?

I don’t believe in the industrial processes of film-making... the handcuffs of the industrial process of film-making, to be precise. When people say ‘action’, ‘cut’ or ‘roll camera’... for me, this is the way films are traditionally made. After a while, I started getting very upset... I felt it was coming in the way of truth, of realism, of my actors... it was coming in the way of me just trying to make a film.

I don’t use lights, I use three or four cameras.... I am more interested in the landscape of the human face, I am interested in trying and getting in some reality. And now I have 10 rules to get to truth.

For me, life has to exist after ‘action’ and ‘cut’, it can’t just be between ‘action’ and ‘cut’. A lot of this is something that I have been practising for the ads that I have made and some of the earlier work that I have done. I want to free the actor to perform. I have to figure out the best way in which I can let my actors ‘be’. I don’t say ‘action’ or ‘cut’. I try and work with a 360-degree system... you can go wherever you want. I am there to make my actors comfortable.

Of course, within that, I know what the script is, I know what to do on set.... This is a process that I have followed in Neerja, in Aarya and even in my first movie Let’s Talk. I have followed it in ‘Har ek friend zaroori hota hain’ (the ad Ram directed for Airtel)... when you saw those kids in a classroom in that ad, you felt they belonged there, there was a certain reality to it. But it actually had kids singing in a classroom. How can that be real?! But we found a way to make it real.

My job as a film-maker is essentially to capture energy. I am here to capture a feeling. This feeling is a bit like a butterfly... it’s fragile and yet I have to capture it in a way that allows it its freedom.

I do a lot of workshopping, but I don’t do rehearsals. So when my actors come on set, they straightaway do a take. I don’t believe in retakes... for me, in life and on set, there is no ‘take two’. In Dhamaka, I have people like Kartik (Aaryan), who I think is a very good actor, then there is Amruta Subhash, Mrunal (Thakur)... a couple of other actors like Vikas (Kumar) and Vishwajeet (Pradhan) who were also in Aarya. There is a whole ensemble-ness in Dhamaka. It’s really this process of mine that allows the actors to flower.

What made you pick Kartik? For many, he wouldn’t be the top-of-mind choice for a part like this....

Kartik picked me. Sushmita (Sen, who played the lead in Aarya) picked me. I am way down the ladder. It’s they who have the power. Kartik and I have been wanting to work together over the last two-three years. Dhamaka just happened to be one of the conversations that seemed like both of us would love to work on. Someone asked me if I am reinventing these actors. I am not reinventing anyone. They are doing the reinventing of themselves. That’s not my responsibility at all. I go to an actor, the actor comes to me sometimes... and it then depends on how that conversation goes.

Sometimes it works out, sometimes it doesn’t. I now know how it works... earlier I would get very disappointed if it didn’t work out. But now I am getting a little better at controlling my disappointments (laughs). I am often told, ‘Ram, in this industry, you have to be thick-skinned.’ And I say, ‘No, I want to be thin-skinned. I am happy being that.’

That must give you a lot of grief sometimes....

I chose this. I chose to climb this mountain, I better expect bad weather (smiles). I deal with situations with a lightness of touch. Sometimes the way I deal with it externally helps me internally. I also meditate every day. That helps me deal with the boot camp that I have signed up for. It’s boot camp every day. And I am still not very successful at it.

Well, there is a human cost to what we do. Dhamaka talks about ambition and what you will gain and lose in the quest for it. Ambition is not a bad thing... in this capitalistic world, we all want to do something, get somewhere.... That’s what we have been taught, right from childhood. Here is a character (Arjun Pathak) who is in it to win it, but there is a cost to everything that he gains. These are conversations that I have with myself every day. And this is what this film says... life ka, love ka, sach ka... dhamaka. Of course there is a real dhamaka that happens in the film. But we are also talking about the metaphorical dhamaka that happens in a man’s heart.

You have said that journalism is just a backdrop in Dhamaka. You have also said it’s a human drama-cum-thriller. Couldn’t it also have been a critique of news as we see it today?

I am not here to critique and that’s not my function in society. I am here to tell a dramatic story about one man and what happens to him when he chooses a certain path and loses a certain value system. This could have happened against any backdrop because this (media) is not what this film is about. It’s about all of us.

Aarya is drawn from the Dutch series Penoza while Dhamaka has its roots in the South Korean thriller The Terror Live. What is it about adaptations that hooks you?

What was your first reaction when you heard that Aarya had landed an International Emmy nomination?

The reaction was to get back to work, quite honestly. Namit Das, who played Jawahar in Aarya, sent me a tweet talking about the nomination. I was working with my editor Khushboo and I told her, ‘There is some International Emmy nomination for Aarya.’ And we just kept working, and after 15 minutes, we had bhelpuri and some ice cream! (Laughs) Bhelpuri is a good way to celebrate!