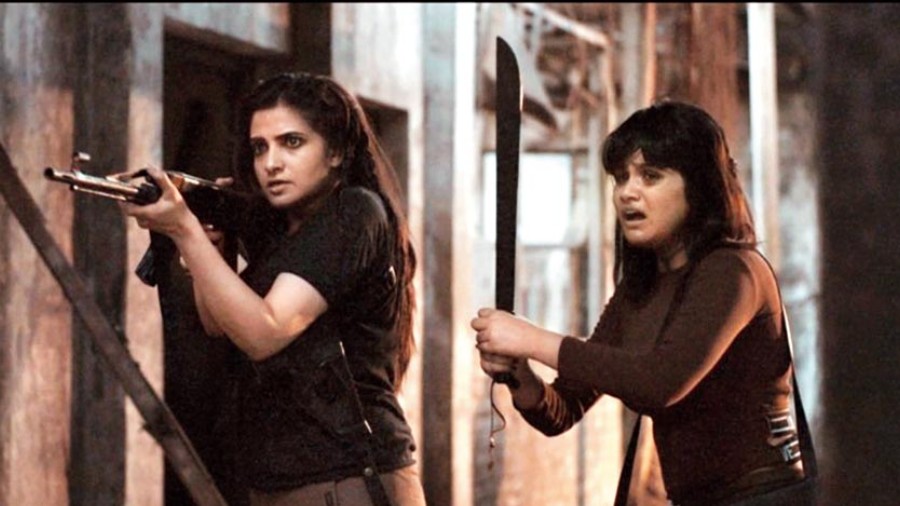 Lighting up a scene effectively is always tricky, but in certain situations, things become more challenging than usual. In these festive times, let’s take you through certain shoot experiences, where my amazing DOPs have created magic out of thin air.

Zombiesthaan: While shooting Zombiesthaan we had to go through a lot of trouble due to the rustic, interior locations. Barely any tech support was available and we had to shoot with minimal resources. In one night sequence, we see the protagonist, Akira (Tnusree), set up a make-shift barrier and alarm system across her jeep. The location was a forest in the middle of nowhere. My DOP, Ankkit Sengupta, focused on the use of practicals in an effective way. He ensured that the scene doesn’t look artificial and yet works in creating the mood. He balanced warm practical light of the jeep’s headlight and created a contrast with the natural moonlight. There was no artificial light available in the scene. Lighting up a dark forest naturally is hard. In this scene, there is a moment where the protagonist hunts and kills a rabbit. The jeep’s headlight bounced off the trees and worked as the facelight for Tnusree.

Though we were unsure how the scene would look in the final output, it turned out rather nice in the film. The minimal light and the effective usage of natural resources, gave the scene an eerie feel and added to the dystopian atmosphere. In Zombiesthaan, even in the travel sequences where we see Tnusree’s facelight while riding the jeep, it is actually the jeep’s headlight that bounces on to the face from the surrounding area.

Also, there is another sequence where Tnusree is seen carrying a moshaal, and fighting off zombies. In this scene too, we relied on natural light only and the light from the live moshaals were the only source of lighting among the dark alleys of a palace.

Rohoshyo Romancho Series 1: When RRS 1 came out, one of the most talked-about moments was a round trolley shot where the actors freeze while tossing a coin. The camera needed to move 360 degrees while the actors remained frozen at a point. The coin frozen midair was later added with CGI.

Since it was a round trolley shot we did not have the option to place light as that would be visible in the frame. We did not even have the VFX budget to remove the visible lights. Our DOP, Ankkit Sengupta, wanted to set up a fill light in order to balance the scene with the natural top sun light and fix the light set-up onto the trolley extension and move along with the camera.

But it was an expensive way to set it up and we had limited resources. Hence, we diffused the top light with a 40-feet chimera cloth and tried to work things out. Thankfully, the scene worked out just fine and became one of the defining moments of the series.

Rohoshyo Romancho Series 2: In RRS 2, the opening sequence proved to be a major challenge to shoot. We had written a riot-like sequence set in 1979, where the protagonist Jhontu gets separated from his mother. With our budget, it was difficult to create that period.

However, we got lucky and found a village that seemed to be stuck in time. However, while shooting the scene, our luck ran out and a child actor, who was playing the childhood version of the protagonist of the series, fell ill.

We had to stop the shoot midway and we faced huge losses financially. We had to reshoot the scene on a later date, but, by that time, we had already ran out of funds. So, my DOP, Ayan Sil, had to rely on natural lighting and a minimalistic approach. There was a moment where a character runs across a village street, while the entire backdrop has been set on fire.

Ayan guided the art team and created different small units of fire by gathering dry branches, leaves, old tyres, and so on. Then we used a large old log we found at the location and set it on fire to create a large fire to establish the main backdrop. Next, we made the character run and perform in front of it. The character appeared in almost silhouette. It was a tragic moment and the silhouette against the fire created a haunting image. Despite of the hurdles, the scene looked beautiful and we were able to have the desired effect on audiences.

Rohoshyo Romancho Series 3: While shooting RRS 3, we faced a new kind of challenge. We were shooting in peak monsoon, that too within the lockdown period. Everything was unpredictable and schedules were going haywire. In these circumstances, we set out to shoot the jail sequences featuring Kanchan Mullick and Sayani Ghosh. Now, the space where we created the jail set was on the first floor of an old mansion, and, the area was surrounded by forest-like gardens. Placing lights was a huge problem.

On top of this, it was raining cats and dogs. In order to create the smoky, light-and-shadow look of the series, we needed to put lights up at a height from outside the windows of the mansion. My DOP, Subhadeep Naskar, set up rostrums outside the windows and placed the lights. However, due to the extreme weather conditions, it was becoming very difficult to keep the lights in position. The stormy winds were making them shift constantly. Ultimately, our light technicians had to climb up the rostrums and hold the lights in position amidst heavy rainfall. They worked really hard and got completely drenched for many hours. The end result was superb. Everyone’s tremendous efforts paid off.

Byadh: While shooting Byadh, we had a shoestring budget; however, the story was set mostly outdoors and we needed to give the series a larger-than-life feel. The challenge was to make the world of the series believable despite of the minimal resources. Also, we wanted to create a gloomy, mossy atmosphere throughout the series. Thankfully, we had the weather on our side. Though we shot the film in peak monsoon, there was barely any rain on shoot days. However, we could make the most of the lush greenery of the rural locations due to the monsoon. Every tree, every bush, every strand of grass got washed clean due to the rains. This helped us create the greenish, humid texture of the series. As we had a minimal budget, my DOP, Subhadeep Naskar, used the biggest light source available in the world, the sun, to utmost efficiency.

We used to plan our shoots based on the position of the sun, and took shots accordingly. This often led to extremely early call times, but no one complained, as the end results were always stunning. For example, we shot the opening sequence of Byadh, from 5am to 8am, at a village near Dankuni.

The lush farmlands and water bodies gave the scene an expansive feel, while the tall grasslands gave its much-needed creep factor. The cloudy sky added to the atmosphere. These natural elements were expertly used by Subhadeep to create the rather eerie, nerve-wrecking opening scene. Our colourist Aritra Dutta Banik enhanced the visuals beautifully to give Byadh its distinct look.