‘Using rain was a stylistic choice. The sequence looked pretty cool with all the slow-motion walking and bullets flying in heavy rain,' says the director 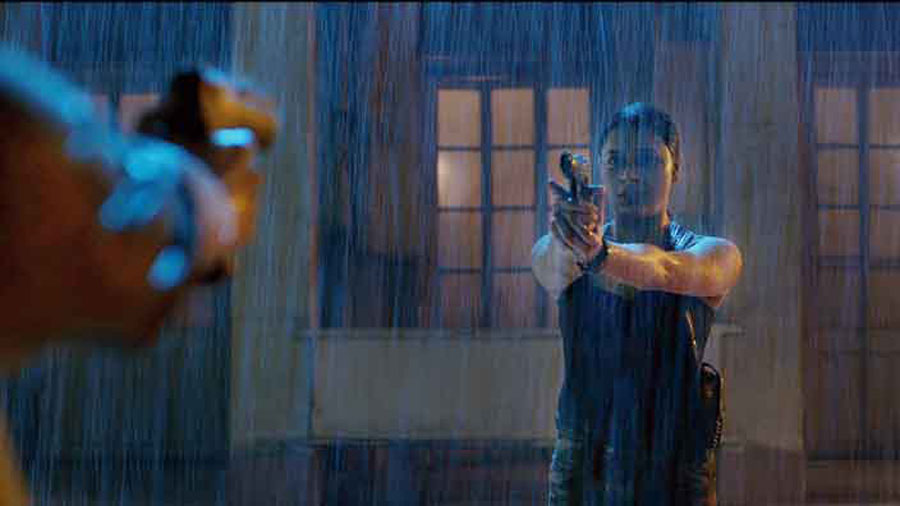 What kind of prep work did you do to set up a rain sequence for the climax of Rahasya Romancha Series 2 (RRS 2)?

I had already shot a rain sequence earlier while making RRS 1, so I had a clear idea about the technicalities. However, the rain sequence of RRS 2 was on a different scale as the scene was the climax and we had mounted the final face-off between Jhontu Da (Rudranil Ghosh) and Kalo Nekre (Saoli Chattopadhyay) in a big way. The entire season had been scripted like a crescendo, with things escalating slowly to reach the climax, which would establish Jhontu Da as a super villain. As the area to be covered by rain was huge, we had to set up numerous rain machine nozzles. We had to arrange multiple generators in order to accommodate the load needed for the rain machine and the lights. Also, as all the actors had to get wet, we had to ensure a steady supply of tea and warm water. We also kept multiple costume change options ready.

Was it the first time you were shooting a rain sequence?

No. The first time I shot a rain sequence was during RRS 1. It was a short sequence though. But, I was quite amazed by the sheer grandeur of the process. For a short sequence, a team of six-seven people had to work in perfect coordination with one another to create the illusion of a cyclone.

Why did you feel it was necessary to have the rain in the climax?

We had introduced and built up the character of Kalo Nekre in a larger-than-life way. As she was supposed to meet her demise in the climax, we wanted her end to be larger than life as well. Similarly, the climax symbolises a final step in the transformation of Jhontu Da from an innocent refugee child, Sanatan, to super villain. We used rain to create heightened drama and a sense of foreboding, symbolising human tears.

Also, using rain was a stylistic choice. The sequence looked pretty cool with all the slow-motion walking and bullets flying in heavy rain. 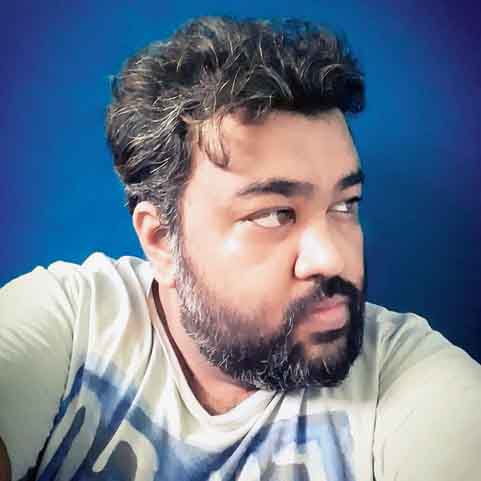 Abhirup Ghosh
Sourced by The Telegraph

How complicated is it to design a rain sequence?

The rain machine technicians are thorough professionals and are highly efficient. However, a rain sequence is usually time consuming, especially in case of a night shoot. The DoP needs to light up the scene effectively. If there are high-speed shots involved, the lighting plays a major role in the quality of the footage.

So, overall, different departments need to work together in perfect sync to make a rain sequence work perfectly.

What did you keep in mind while designing it?

As we were shooting in peak winter, the biggest concern was the comfort and safety of the actors. From the planning stage itself, we had designed the shots in such a manner that we could pull off the whole sequence in barely one hour. The goal was to minimise the exposure of actors to the cold water.

What were the main challenges of shooting the climax in the rain?

The biggest issue was the cold weather. On top of this, Saoli Chattopadhyay, who played Kalo Nekre, was unwell. Even as the rain machine was being set up, we were not sure whether we would get the actors completely wet or use umbrellas. Thankfully, Rudranil Ghosh rose to the occasion and braved the weather to voluntarily and happily get wet. As he was the seniormost actor on set, everyone else followed his example. Saoli and Madhurima Ghosh both were extremely sporting and shot the entire sequence completely drenched. Saoli had to get shot and practically roll in the wet ground. We made her go through a lot, but she did an amazing job. We kept a steady supply of tea, hot water and honey to keep the actors warm.

How long did it take?

Setting up the sequence took quite some time as the zone was massive. Lighting such a scene is complicated. Also, a generator broke down and we had to get it replaced. This caused a delay of around two hours. Once everything was ready, we shot the whole scene rather fast and wrapped it up within an hour.

What is the role of the DoP here?

My DoP, Ayan Sil, and I share the same preferences in films and this made shooting RRS2 a breeze for me. He read the script and got my references without me having to explain anything much. He knew exactly what I wanted for the climax and he delivered beautifully. Lighting up such a huge zone for a night sequence is itself challenging. On top of this, the high-speed shots required intricacy. Due to the generator failing, we were low on time as well. Once Ayan managed to light up the scene effectively, he shot the entire sequence at an extremely fast pace.

How did the actors perform during the sequence?

All the actors were impeccable. Even in extremely cold, uncomfortable circumstances, everyone went the extra mile to get that perfect shot. There were no complaints.

Jhontu Da was smoking during the scene? How did that happen?

We wanted Jhontu Da to have a hyper stylised entry. That’s why the umbrella and the beedi were used. We knew that the beedi would get wet and stop burning as soon as Rudranil da threw off the umbrella and entered the heavy rain. So, he took a puff and held his breath a bit. Just as he tossed the beedi away, he exhaled the smoke, giving the impression that he had been smoking even in heavy rain. 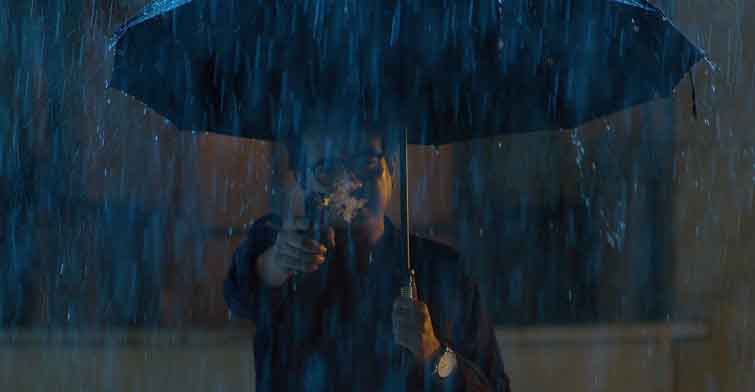 Rudranil Ghosh as Jhontu Da in RRS2.
Sourced by The Telegraph

Which are your fave rain sequences of all time?