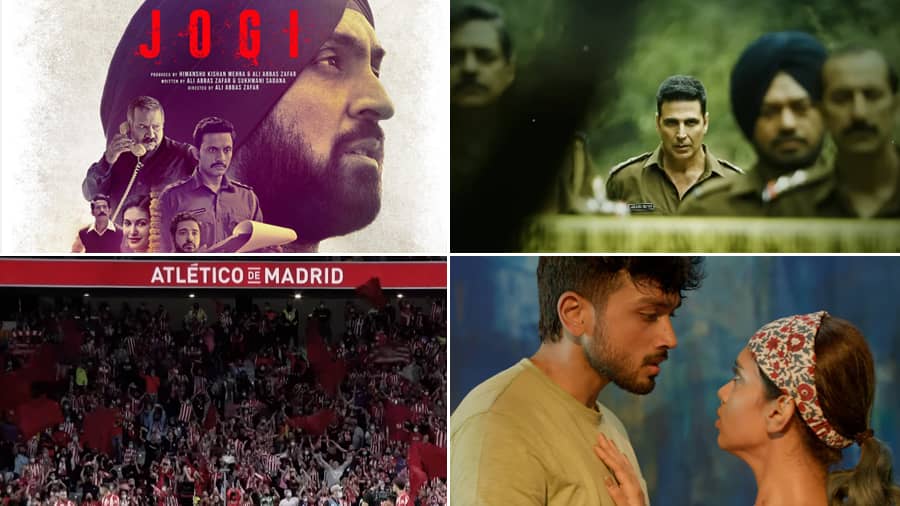 Netflix has shared the official poster of its upcoming film Jogi, set amid the 1984 anti-Sikh riots. Singer-actor Diljit Dosanjh will play the lead in the film directed by Ali Abbas Zafar, who helmed blockbusters like Tiger Zinda Hai and Sultan.

Diljit shared the poster on Instagram and wrote, “Himmat da naam Jogi. Umeed da naam Jogi. Watch this gripping tale of bravery, friendship, hope and everything in between. Out on 16th September, only on Netflix!”

Set in Delhi, the film follows a story of resilient friendship and courage in the times of adversity.

Jogi will be streaming on Netflix from September 16.

Disney+ Hotstar has released the promo of Akshay Kumar’s upcoming psychological thriller Cuttputlli. Akshay plays a police officer in search of a serial killer in the film.

The film is produced by Jackky Bhagnani and Deepshikha Deshmukh under their banner Pooja Entertainment and directed by Ranjit M. Tiwari, who previously helmed the Akshay-starrer Bell Bottom. The screenplay and dialogues are written by Aseem Arrora. National Award-winning cinematographer Rajeev Ravi is also associated with the film.

The official trailer of Cuttputlli will be released On August 20, and the film will be streaming on Disney+ Hotstar from September 2.

The two-minute-43-second-long trailer gives us a sneak peek into the lives of modern theatre artists as they express what love means to them. The trailer promises an intense drama that will break heteronormativity and explore queer themes.

Another Way Of Living

Amazon Prime Video Sport has released the trailer of their upcoming documentary Another Way Of Living on Spanish football club Atletico Madrid.

The Spanish documentary will follow the club during the 2021-2022 season which saw the fans return to the stands after the pandemic. Passion, challenges and dedication connect the stories of fans and footballers united by their clubs. It will track the nitty-gritty of the club and its community and the on-field philosophy of their famed Argentine coach Diego Simeone.

The two-minute-long trailer features players like Antoine Griezmann, Matheus Cunha, Stefan Savic and club captain Koke along with former player Luis Suarez, who left the club after the season.

Another Way Of Living will be available to stream on Prime Video from September 8.

Netflix shared the trailer of their new series Buy My House where top real estate tycoons will meet house owners and help them sell their properties without any hassle.

Buy My House will be streaming on Netflix from September 2.