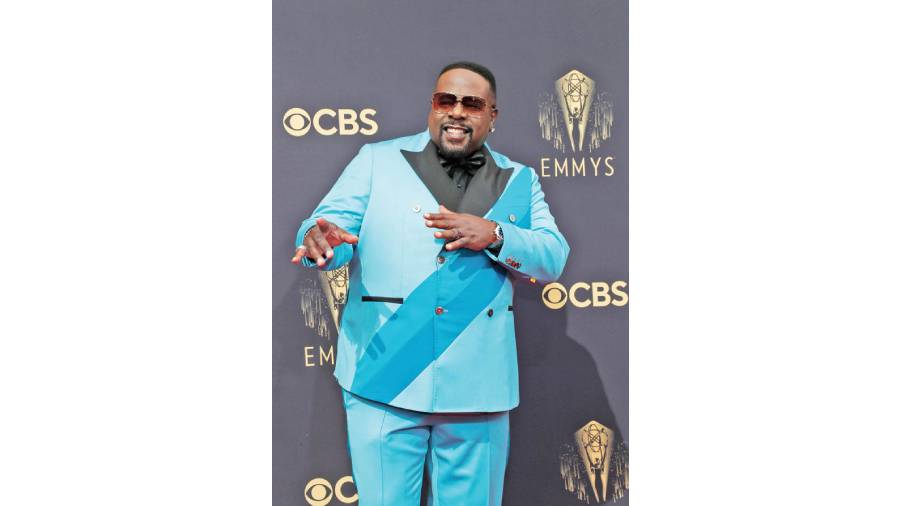 The fact that the world is slowly limping towards normalcy was illustrated by the Emmy Awards on Sunday night (Monday morning in India) with a (largely) in-person ceremony at the event deck at the entertainment complex L.A. Live where the TV Academy said the limited number of attendees could be better socially distanced.

That prompted actor-comedian Seth Rogen, presenting the first trophy of the evening, to deliver the first laughs, “There’s way too many of us in this little room. They said it was outdoors. It’s not. Why is there a roof? This is insane.... I went from wiping my groceries to having Paul Bettany sneeze in my face. That’s a big week!”

The rest of the entertainment came in from show host Cedric The Entertainer who, more or less lived up to his name with some smart ones and a few that fell flat. He opened the night with a karaoke rendition of Just a Friend by Biz Markie, aided by Rita Wilson, LL Cool J and Lil Dicky. The audience, which included about 500 nominees and guests, joined in, standing up, clapping and singing along. The line we liked? Cedric countering Rogen with, “We had to be vaxxed to come here. I got vaxxed. I did not have a reaction like Nicki Minaj’s cousin’s friend!” 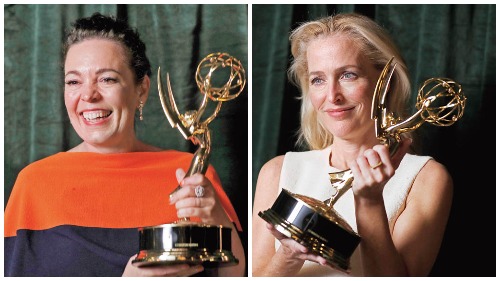 THE CROWN TAKES IT ALL

Colman, whose speeches are always a highlight, brought on a lump in the throat, dedicating her first Emmy to her late father who she lost during the pandemic. “I wish my dad was here to see this. I lost my dad during Covid and he would have loved all of this,” said Colman. What’s noteworthy is that with Colman’s win, both actresses who have portrayed Queen Elizabeth II for The Crown have bagged an Emmy for the role, with Claire Foy winning in 2018. In fact, Foy won an Emmy this year too. The category? Best Guest Actress in a Drama Series for reprising her role as the young Queen Elizabeth for a flashback sequence. 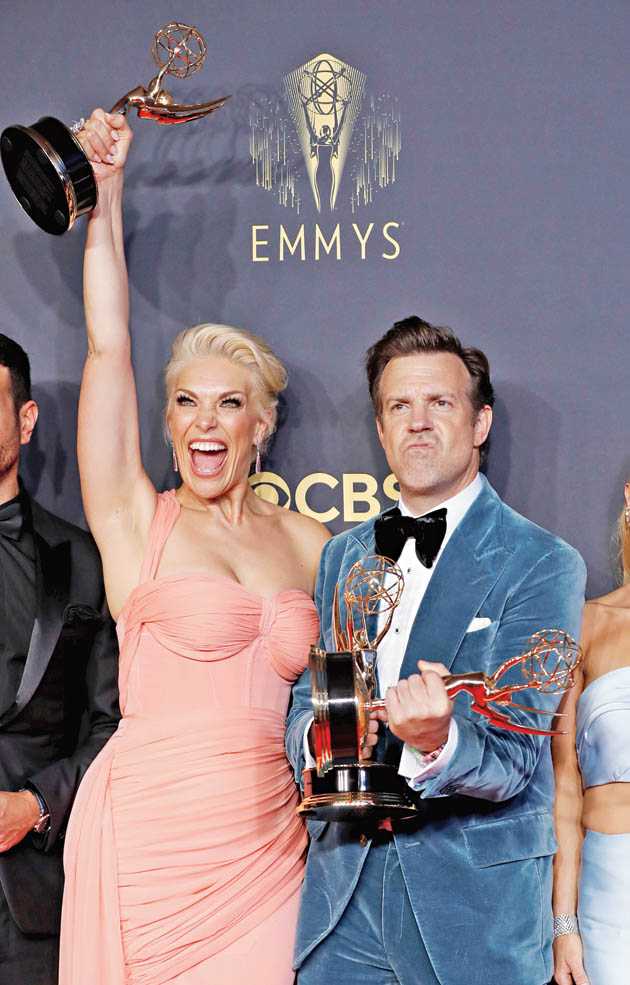 The other big winner of the night was Ted Lasso, with the heartwarming Apple TV+ show earning four nods. Among them was Jason Sudeikis, who won the trophy for Best Actor, Comedy Series for his outstanding portrayal in the title role of an American football coach who’s signed up to lead an English soccer team despite having no experience with the sport. 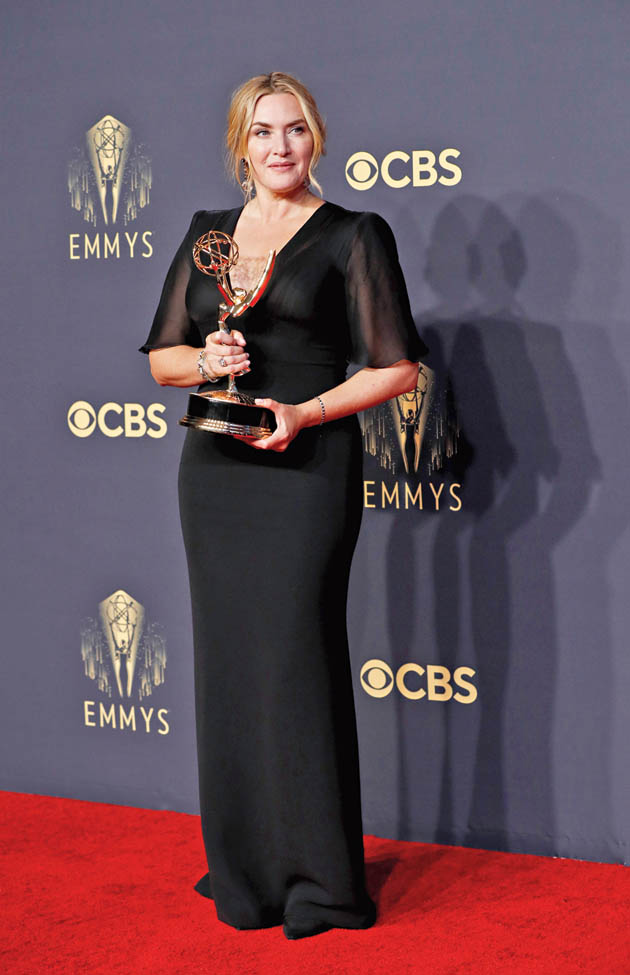 Kate Winslet is one Tony win away from an EGOT honour

Kate Winslet’s outstanding act in the highly lauded Mare of Easttown deservedly won the actor an Emmy for Outstanding Lead Actress in a Limited or Anthology Series or Movie. Winslet thanked her fellow nominees, saying that this was a decade “that has to be about women having each other’s backs. I salute you. I support you. I’m proud of you”.

This marks the 45-year-old actor’s second win in the same category after she won an Emmy for the 2011 HBO limited series Mildred Pierce. Having also won an Oscar and a Grammy already, Winslet is one Tony Award away from achieving an EGOT (Emmy, Grammy, Oscar, Tony), which would put her in the coveted category of artistes who have won all four of the major entertainment awards. Go, Kate! 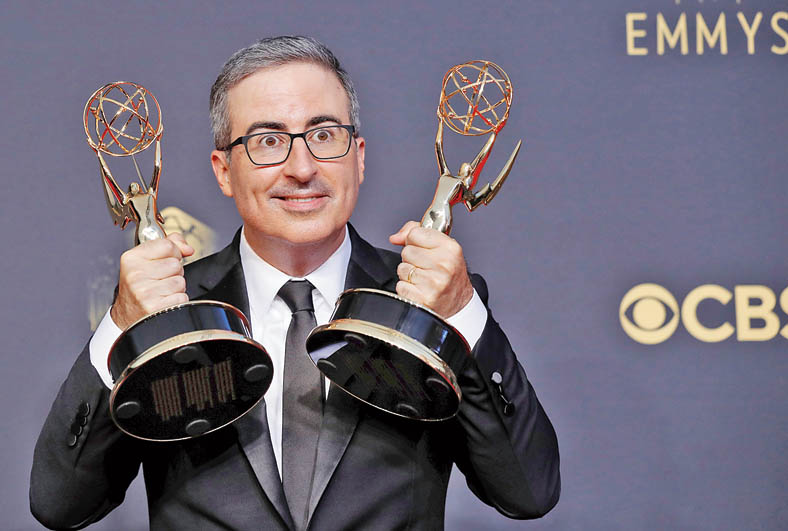 BEEN THERE, DONE THAT... SIX TIMES OVER!

HBO’s Last Week Tonight with John Oliver has taken home the Emmy for Outstanding Writing for a Variety Series for six consecutive years, and yes, the team won yet again. For the record, it’s won the Outstanding Variety Talk Series award for the sixth year in a row, too. Phew! 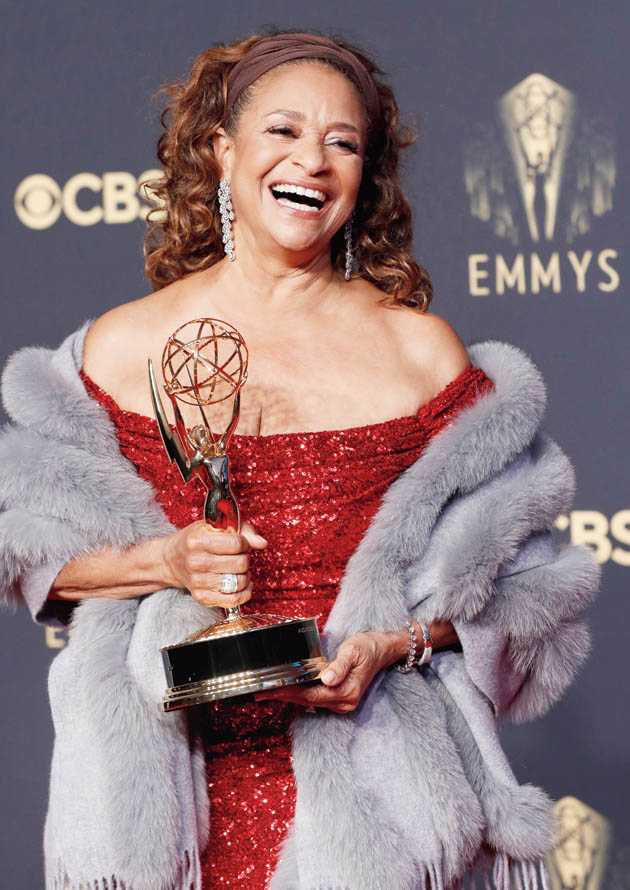 The evening also saw actor-director Debbie Allen picked as the recipient of the 2021 Governors Award for “her outstanding achievements in television, philanthropic endeavours, and commitment to inspire and engage marginalised youth through the arts”. Allen, 71 — best known for shows like Fame and Grey’s Anatomy —  has been nominated 20 times for an Emmy Award in her prolific career, winning five. 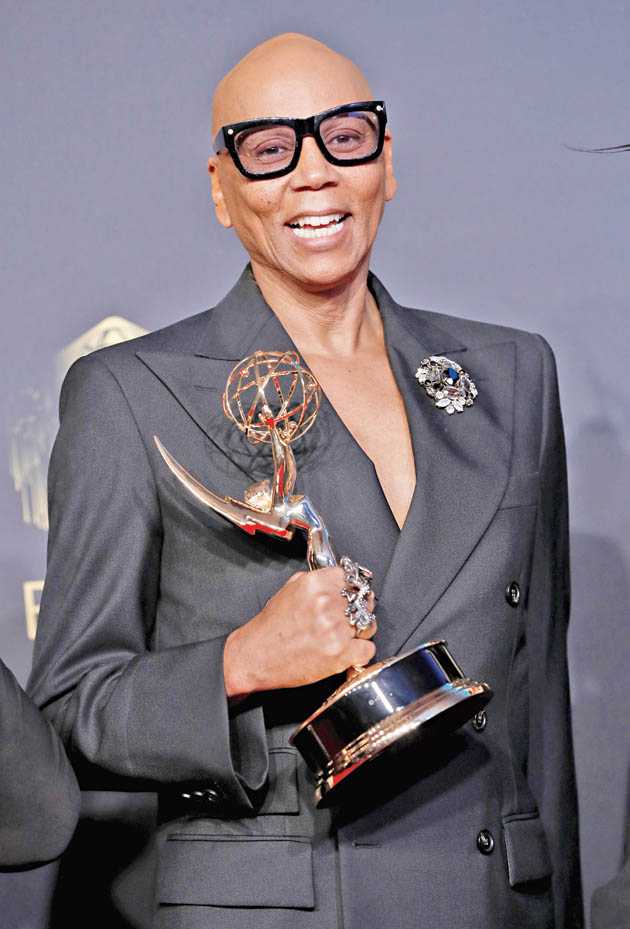 RuPaul with his Emmy

The lack of representation was a point of contention this year. Despite having a diverse group of nominees in its history, this year only two performers of colour —

I May Destroy You’s Michaela Coel and RuPaul’s Drag Race’s own RuPaul — won honours, neither of which was in an acting category. This prompted #EmmysSoWhite to trend on Twitter immediately after the telecast ended. 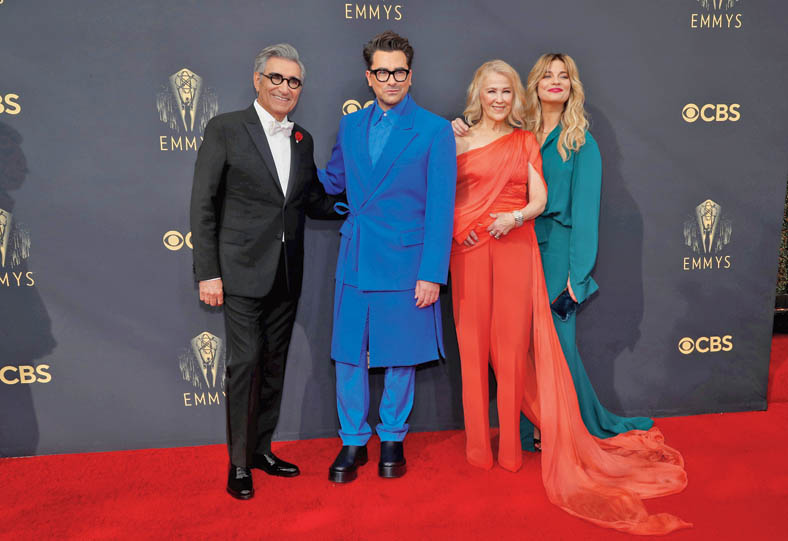 They swept the major categories last year and were back this time for a reunion. Team Schitt’s Creek — Eugene Levy, Daniel Levy, Catherine O’Hara and Annie Murphy — made for an eye-catching quartet, appearing on stage together to present the comedy directing and writing categories.

True to form, the four — who walked in to a standing ovation — livened up the show immediately, exchanging quips when their teleprompter played truant.

“There’s nothing on the prompter,” Dan said, with Catherine O’Hara wickedly suggesting, “Maybe we should just open the envelope?”

“Okay, they wouldn’t be doing this on purpose, would they?” Eugene said, with his gang quickly pouncing on him and asking him if he was up to something.

“Eugene, did you do something?” O’Hara added as Eugene admitted to asking the Emmy writers to “lift the writing a little bit”.

Times like these make us wish more than ever that the Roses made a comeback. Sigh!