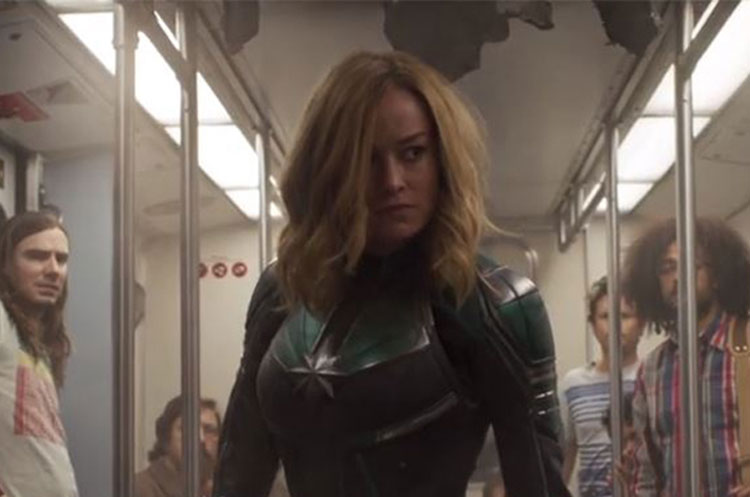 One thing we learn in Captain Marvel is that it’s pronounced MarVELL, like the English poet — or at least it used to be, on distant planets and right here on earth, a windy rock also known as C-53. That was back in 1995, when most of this movie takes place and when the world as we know it had not yet been colonised by the Marvel Cinematic Universe. Yes, of course, Marvel Comics had been around for decades, but when the heroine crashes through the roof of the Blockbuster Video store, landing in between the “Family” and “Drama” sections, there are no Avengers or Iron-Man titles on the shelves.

Instead, she picks up a VHS box of The Right Stuff, which earns a mild chuckle, since while we know that she’s a space alien named Vers (rhymes with “cheers”), we also have reason to suspect that this young woman is connected with the United States Air Force, and maybe the space program, too, like the guys in that film. Also known as Carol Danvers, and played by Brie Larson, she has some of their bravado, and also — since she’s on the way to intergalactic superheroism — a righteous sense of mission and a burgeoning identity crisis.

The last and least surprising thing we learn about her is that Captain Marvel will return in Avengers: Endgame, a scrappy little picture that will be released in seven weeks, if you can stand to wait that long. Directed by Anna Boden and Ryan Fleck from a script they wrote with Geneva Robertson-Dworet, Captain Marvel is an origin story, which is to say a resume check for the newest member of popular culture’s biggest, most heavily capitalised corporate team.

As such, it’s pretty good fun, and could almost be described without sarcasm as a scrappy little picture, like most of Boden and Fleck’s other work. (Their resume includes Half Nelson, Sugar and It’s Kind of a Funny Story). It’s not too long, not too self-important, and benefits from the craft and talent of a cast that includes Annette Bening, Jude Law and Ben Mendelsohn.

And of course Samuel L. Jackson, who plays a young, two-eyed S.H.I.E.L.D. agent named Nicholas Fury. How Fury lost one of those eyes is the big spoiler to avoid here, and the character’s extended presence, after so many agitated cameos over the years, is a big part of the movie’s appeal. To watch the digitally rejuvenated Jackson riding around mid-90s Los Angeles, sort of like he did in Pulp Fiction, is to indulge in a bit of Gen-X nostalgia, a mood augmented by period-appropriate musical cues from Salt-N-Pepa, TLC and Nirvana.

There are pay phones and pagers, too, and boxy government cars and all kinds of stuff that kids these days just don’t appreciate. Even the science-fiction elements have a mildly retro, Star Trek: The Next Generation feel. And the overall vibe, for all the fireballs and fisticuffs, is decidedly friendly. In addition to the Vers/Fury buddy-movie pairing, there is a best friend for Carol (a fellow pilot named Maria Rambeau, played by Lashana Lynch) and a succession of frenemies. Best of all, there is an orange cat. I will never hate a movie with an orange cat.

The plot of Captain Marvel, for some reason, is another secret I’m supposed to keep. Which is fine. In spite of what some unhinged fans on social media might say, I was not paid by Disney to explain anything. Boden and Fleck were, and they do a perfectly adequate job. There’s a big war going on between the Kree — Vers’s people, at least as far as she knows — and the Skrull, green-skinned, pointy-eared beings who have the unnerving skill of turning into doppelgangers of anyone they see. Annette Bening is involved. We first see her as a manifestation of Supreme Intelligence, which seems accurate enough. I’ll say no more.

The twists in the story reveal a slyly anti-imperialist politics, which is both in keeping with the pluralist ethic of the Avengers cycle and just a bit subversive of the Disney-Marvel agenda of universal domination. The most sympathetic group of characters wants nothing more than to go somewhere else, to escape from the annihilating attention of their would-be conquerors. They might represent various oppressed and dispossessed earthly populations. They might also stand in for that portion of the movie audience that feels the cinematic universe shrinking around them.

Not that anyone can stop the Marvel Cinematic Universe from expanding. By now the contradictions of this gigantic enterprise are obvious enough. It’s inclusive and monopolistic, predatory and empowering. Every episode is unique — every hero is a complex individual with a singular backstory — within an overall structure of sameness.

Filmmakers like Boden and Fleck, Ryan Coogler and Taika Waititi can put their own spin on a given story or hero, but at some point bolts or waves of orange or blue light will come shooting out of someone’s hands and someone else will be thrown backward and bounce off a wall. The protagonist’s costume will become a character in its own right. That protagonist — a tough and charming woman, in this case, determined to fight gender cliches at least to a draw — will be ready for a career of franchise clock-punching, along with the rest of us. You will stay through the very last credits in the hope of collecting every last Easter egg, and you’ll shuffle out of the theatre feeling both satisfied and empty.