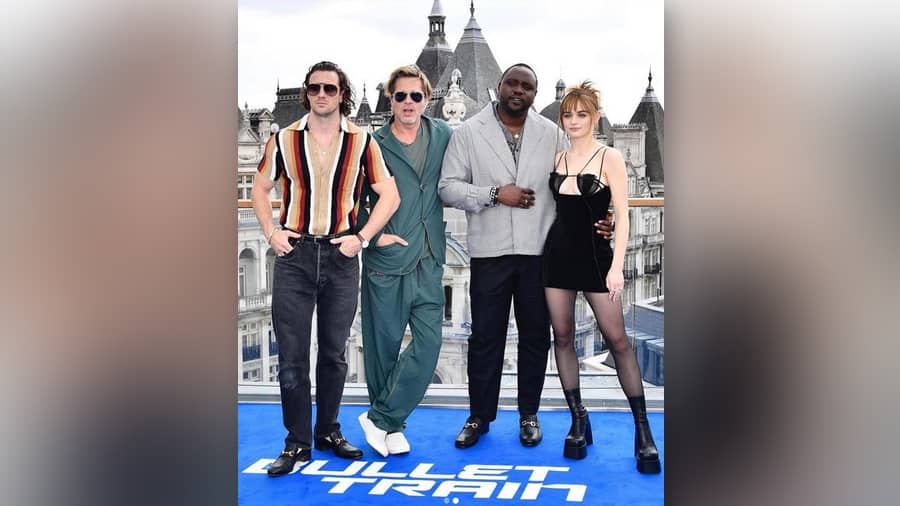 Hollywood star Brad Pitt says he found the “most fun” role of his career in Ladybug, “a chump” of an assassin, in the upcoming action film, Bullet Train.

The Oscar-winning actor headlines the Sony project directed by Deadpool 2 filmmaker David Leitch, who previously served as Pitt's stunt double in many movies such as Fight Club and Troy.

Pitt said Bullet Train came to him at the peak of the coronavirus pandemic and felt like a breath of fresh air.

“When this script came along, it was like five- six months into the pandemic. There was this air of depression, we were all getting a little crazy and this film was a really funny piece,” he added.

“Also concurrently, it was with an old friend of mine David Leitch. We had an actor-stuntman relationship. He was my stunt double for Fight Club, Mexican, Troy and Mr and Mrs Smith. So it was really to come back around a full circle. But this time Leitch, my man, was the boss,” Pitt said during a virtual global press conference of the film.

In Bullet Train, Pitt stars as the seasoned assassin Ladybug, who wants to give up the life of an assassin but is pulled back in by his handler Maria Beetle in order to collect a briefcase on a bullet train heading from Tokyo to Kyoto. Once on board, he and the other competing assassins discover that their objectives are all connected.

Pitt said the makers imagined his character as someone who returns to work after a mental breakdown.

“First of all, he's a chump, and the chump is the most fun role to play hands down. The DNA for him was all in Zak's (Olkewicz) writing, but we kind of thought it like maybe he was coming from a mental breakdown, certainly an absence from work… And maybe he had a couple of months of therapy under his belt. Therefore, he thought he had all the answers and life was just gonna be peachy keen and roses. And we can solve the conflict peacefully. But this doesn't go right,” the 58-year-old actor said.

When King remarked that Ladybug felt like a “22-year-old going through self discovery”, Pitt said, “The sad thing is that's pretty much where I am in life.”

What he liked about the movie was that it focused on every character equally, Pitt said.

Bullet Train, which is based on the Japanese novel Maria Beetle by author Kotaro Isaka, features Taylor-Johnson and Tyree Henry as Tangerine and Lemon, a pair of British assassins, and they said they had a great time working together.

“My partner-in-crime was Brian Tyree Henry. And without him, I couldn't have built this character. We instantly hit it off because I love this man. I've enjoyed watching Brian an actor, I was already a huge fan of his work,” Taylor-Johnson said.

Tyree Henry said he found a perfect companion in Taylor-Johnson as he could act like an “absolutely stupid” person with him.

Leitch, also known for directing hit action movies like Atomic Blonde and Hobbs & Shaw, said his time on Deadpool 2 prepared him for the challenge of Bullet Train.

The filmmaker also said that he loves “comedy, action and I love hard boil genre”, and all these elements are present in his latest film.

“These types of movies, they're commercial and you can have messages in them that you couldn't have in dramas otherwise. Bullet Train has this theme of fate, brotherhood and redemption. And you can have it a little bit like philosophy and a cool message in a movie that is a commercial comedy,” Leitch added.