Home / Entertainment / ‘Baarir Lok’ by Asian Paints Sharad Shamman gives you a peek into the true spirit of Pujo
The touching background score in the film has been created by composer-singer Anupam Roy. 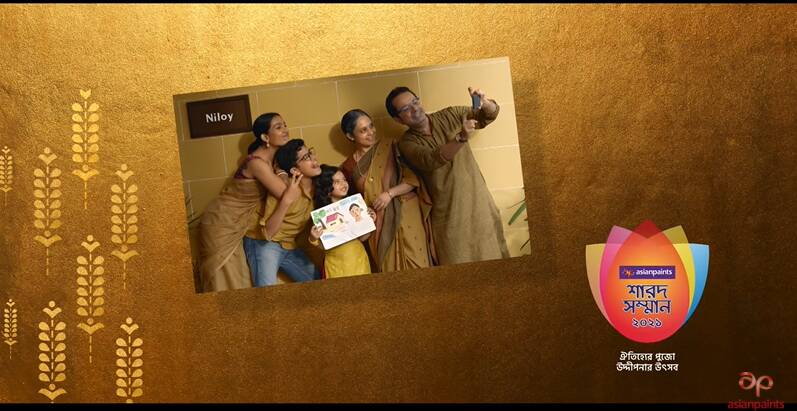 Asian Paints recolours 2021 with their annual Sharad Shamman film that brings to light the true essence of the festival. The endearing film aptly titled, ‘Baarir Lok’ means ‘people of the house.

Each year people across the country come together for Pujo to celebrate culture and the power of creation through historical traditions. In recent times, due to the pandemic, most of us have learned the importance of home as it is our safe space, a haven where we’ve been spending the most of our time.  Asian Pants Sharad Shamman is endeavoring to remind us all to take care of our homes, along with ourselves using ‘Baarir Lok’ as the medium of the message. The touching background score in the film has been created by composer-singer Anupam Roy.

The film opens to a little girl, Minnie who is sketching in her room when her mother calls out to her. She goes outside her room to see her grandma, mother and aunt looking at new clothes and chatting away. Minnie’s grandma then presents new clothes to both her brother and herself which leads Minnie to ask ‘Won’t you give Niloy anything? While viewers are confused, Minnie’s consideration touches her grandmother’s heart.  The next few days the entire family comes together to redecorate the house with a vibrant, and meaningful makeover for Pujo by using a number of Asian Paints products with ease. Finally the day comes when it is revealed that ‘Niloy’ is the name of their house and little Minnie loves its new look. She hugs the wall and then hugs her grandmother out of sheer joy.

Speaking about the film, Amit Syngle, MD and CEO, Asian Paints Limited expressed, “Imprinted in the hearts of Kolkata since 1985, Asian Paints Sharad Shamman is a beautiful tradition that goes hand in hand with Durga Pujo. Year on year, Asian Paints Sharad Shamman films give us a chance to celebrate the beauty of togetherness and soulful festivities. We have been carrying forward the legacy we created by honouring the Goddess Durga in our own significant way. This year we wanted to seize the opportunity to remind everyone that our homes are an extension of us, a safe haven where we’ve been finding refuge throughout the pandemic. It is only fair to take care of and brighten up our homes, just as we do for our loved ones and ourselves. The film has captured that in a touching way. ‘Baarir Lok’ demonstrates that we must not only do the bare minimum, but truly take care of our living spaces as they are indeed a reflection of who we are and where we come from. The film also beautifully captures the family using different Asian Paints products in every part of their home during the festive makeover.”