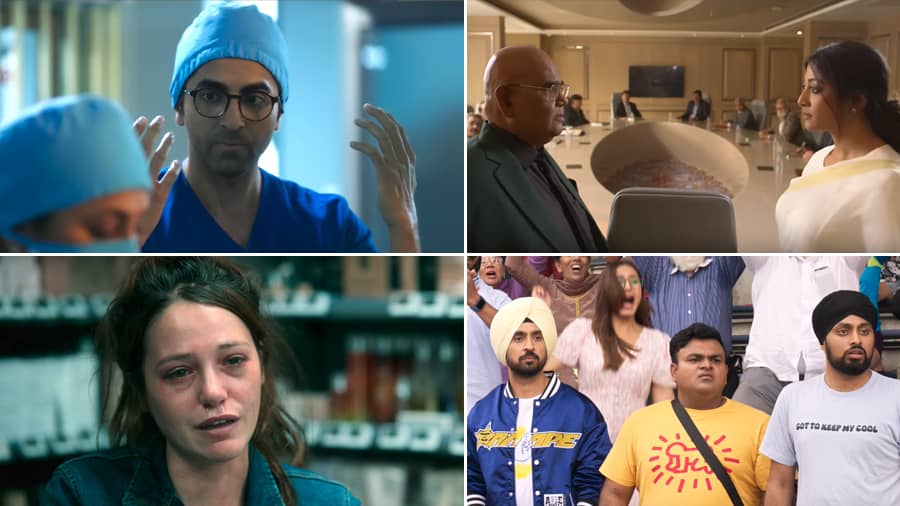 Junglee Pictures have dropped the trailer of their upcoming medical campus comedy-drama Doctor G which stars Ayushmann Khurrana as a doctor. Produced by Vineet Jain and Amrita Pandey, the film is directed by Anubhuti Kashyap.

The hilarious, almost three-minute-long trailer chronicles the struggles of Dr Uday Gupta (Ayushmann), who wanted to specialise in Orthopaedic, but is stuck in an all-female class of Gynaecology. The film also features Shefali Shah and Rakul Preet Singh.

Doctor G will hit the cinemas on October 14.

The one-minute-38-second-long trailer takes us through a crime-ridden Kolkata. From the trailer, it is clear that the show, with a family feud at the heart of it, will be high on action, violence and drama. Karm Yudh also stars Chandan Roy Sanyal in an important role.

All episodes of Karm Yuddh will be available to stream from September 30.

The trailer of upcoming French limited series Notre Dame is out. The Netflix series takes place during the night that the medieval catholic cathedral burned on April 15, 2019.

The official synopsis of the series reads, “It’s about the destiny of men and women who have their own fire to put out. As the Paris firefighters try to stop the flames from spreading in the Cathedral, the show also follows characters being put through the wringer - they will have to fight each other, love each other, come across each other, hate each other, smile at or help each other - so that, in the end, they may have a chance to start all over again.”

Notre Dame will be streaming on Netflix from October 19.

Punjabi singer-turned-actor Diljit Dosanjh has released the trailer of his upcoming Punjabi comedy film Babe Bhangra Paunde Ne. Dosanjh, who was recently seen in Netflix thriller Jogi, will be seen in a goofy avatar in the upcoming film.

The three-minute-15-second-long trailer focuses on a young NRI Punjabi man, who dreams of becoming a successful entrepreneur but is stuck doing odd jobs. He then devises a plan to take care of old people just to get their life insurance money. However, his plan backfires as the elderly ill man he adopts gets well after living with him. Directed by Amarjit Singh Saron and written by Naresh Kathooria, the film also features Sargun Mehta and Sohail Ahmed among others.

The two-minute-29-second-long trailer chronicles the story of an upcoming actress Avani Modi, who comes into the media limelight as PM Modi’s daughter. In an attempt to prove their capabilities, two terrorists Bilaal and Tausif make a master plan of kidnapping Avani and bringing her to Pakistan while demanding Kashmir in return.

Modi Ji Ki Beti will release in cinemas on October 14.

Tips Malayalam has shared the teaser of its upcoming Malayalam satire Saamaniyan starring Ramarajan and Radharavi. Directed by R. Rahesh, the film looks like a satire on politics.

The one-minute-51-second-long teaser gives us a glimpse of the characters. The film, produced by V. Mathiyalagan under the banner of Etcetera Entertainment, also features MS Baskar and Mime Gopi among others.