'With all humility, I step back, I have decided to contribute entire endorsement fee towards a worthy cause' 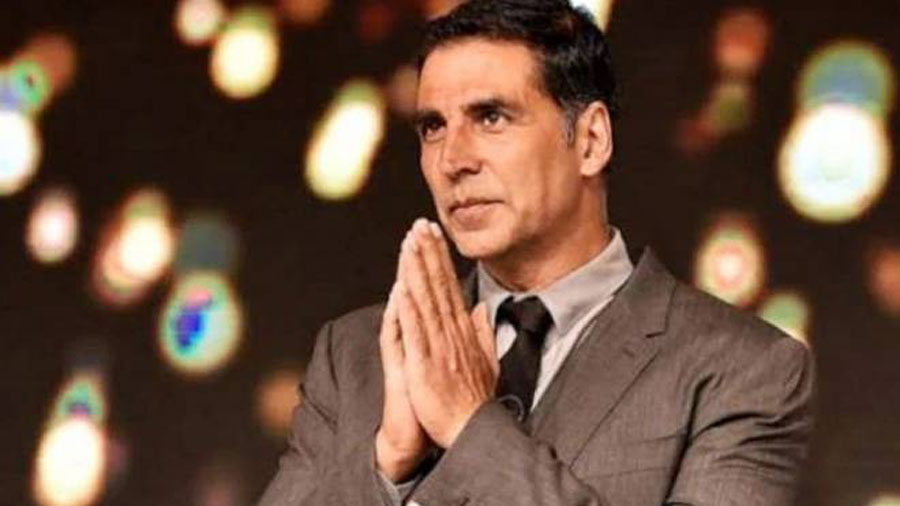 Superstar Akshay Kumar on Thursday apologised to his fans for featuring in an advertising campaign of a paan masala brand and said he was withdrawing his association.

Kumar came under fire for endorsing the brand, with social media users digging up an old video of the actor where he had vouched to never promote tobacco.

The 54-year-old actor took to Twitter and posted a note that began with him writing, "I am sorry", as many fans of the star had expressed displeasure over his decision.

Kumar said he has decided to "step back" from the brand and would now be donating his entire fee towards a "worthy cause".

"I would like to apologise to you, all my fans and well-wishers. Your reaction over the past few days has deeply affected me. While I have not and will not endorse tobacco, I respect the outpouring of your feelings in light of my association...

"With all humility, I step back. I have decided to contribute the entire endorsement fee towards a worthy cause".

Kumar said the brand might continue airing the ads till the "legal duration of the contract that is binding upon me".

"But I promise to be extremely mindful in making my future choices. In return I shall forever continue to ask for your love and wishes," he added.

In the recent promo, Ajay Devgn and Shah Rukh welcomed Akshay to the ‘Vimal’ universe, and were all chewing on cardamon.

Unhappy with Akshay promoting a harmful product, fans took to social media to share old videos of the actor in which he was seen speaking against consuming alcohol and tobacco products, to remind him of what he once said.

Netizens pointed out that Akshay who is one of the fittest actors in Bollywood was endorsing what is primarily a gutka brand.

Vimal employs surrogate advertising to sell products such as ‘gutka’.

Surrogate advertising is defined as a form of advertising which is used to promote banned products, like cigarettestobacco and alcohol, in the disguise of another product.

The actor is getting heavily trolled for endorsing pan masala brand Vimal Elaichi.

where are your moral standards now. not expected this. Lacs of people following you.@alluarjun he set an example to reject the offer for guthkha. #VimalPanMasala #Vimalelaichi pic.twitter.com/BPJrlcKpzp

Fans have shared a throwback video of the actor Akshay Kumar where he was speaking about how he has been getting some amazing offers to endorse pan masala and tobacco products, but keeping the tagline alive ‘Swasth Bharat’ he is not going to be the part of such endorsements. After being the part of this advertisement he is getting some unhealthy comments from the netizens.

On Wednesday, a rumour went out that Allu Arjun has rejected an endorsement offer owing to his principles. The offer pertains to an unnamed pan masala brand. The news was embraced by even North Indians.

Anshul Saxena, who commands nearly 1 million followers on Twitter, praised Bunny and asked Bollywood stars to learn from him. He wrote, "Tollywood Actor Allu Arjun was offered a large payment for an endorsement by a Pan Masala brand, but he rejected the offer. This is what Bollywood actors Ajay Devgan, Shahrukh Khan and Akshay Kumar need to learn from him."

Tollywood Actor Allu Arjun was offered a large payment for an endorsement by a Pan Masala brand, but he rejected the offer.

This is what Bollywood actors Ajay Devgan, Shahrukh Khan and Akshay Kumar need to learn from him.

Earlier, megastar Amitabh Bachchan had also withdrawn from an advertising campaign of a paan masala brand and said he had returned the money he had received for promoting it.

Big B had announced his withdrawal from the Kamla Pasand campaign in October, 2021 after a national anti-tobacco organisation requested him to refrain from endorsing a pan masala brand to help prevent youngsters from getting addicted to tobacco. Bachchan was also trolled on social media for the campaign.

Bachchan had announced his withdrawal from the advertising campaign on his 79th birthday, saying that he wasn’t aware that it came under surrogate advertisement.