The film, despite some masala moments, has boredom and banality piling up as easily as the body count 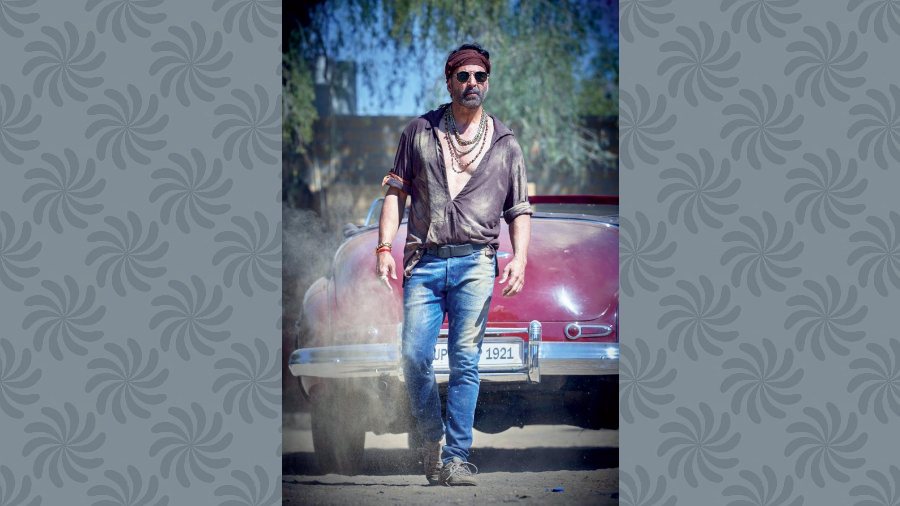 The last time Akshay Kumar was called Bachchan Pandey in a film, it resulted in the horror fest (we are talking experience here, not genre) called Tashan. In Bachchhan Paandey, now with a few more alphabets thrown in, Akshay plays the eponymous character, a dreaded don in Uttar Pradesh’s Bagwa, who comes armed (pun intended) with lines like, “Mujhe bhai nahin, godfather bolte hain”. Bachchhan has an eye made of stone, and a stone-cold heart, in what is yet another attempt at a credible physical transformation by the Khiladi (see box). But the 150 minutes of Bachchhan Paandey, despite some masala moments, has boredom and banality piling up as easily as the body count that its titular character leaves in his wake.

Unlike other Akshay films (Bhool Bhulaiyaa, Action Replayy, Rowdy Rathore, Gabbar, Laxmii, et al) that hit us before we could blurt out ‘remake’, it’s taken quite a while for Jigarthanda to find its way to the Bolly screen. The 2014 genre-bending Tamil film, that translates to ‘cold-hearted’, had director Karthik Subbaraj successfully combining comedy with gore and a strong emotional core. Jigarthanda was wildly original, with Bobby Simha, in the role that Akshay plays in Bachchhan Paandey, churning out a quirky act in a film that had its tongue firmly in its cheek. As a result, the film turned out to be as fresh and refreshing as Jigarthanda, the popular native-to-Madurai drink.

Bachchhan Paandey, even though it retains huge chunks from the original, isn’t a patch on Jigarthanda. That’s not tough to believe, given the film is directed by Farhad Samji, the man behind the last two Housefull films, with an adapted screenplay credit to producer Sajid Nadiadwala.

Which means that in a gender reversal in Bachchhan Pandey, Kriti Sanon (strong screen presence, but in a wardrobe divorced from the reality of the film) takes the place of Siddharth, who featured in the original as the aspiring director who treads dangerous territory — both literally and figuratively — to make a film on the gangster. Kriti stars as Myra, whose passion and daredevilry — initially dismissed as stupidity by most — to make a film on Bachchhan Paandey finds her travelling to Bagwa, friend and small-time actor Vishu (Arshad Warsi) in tow. Reason? To shadow the don, in order to collect enough material to make his biopic (which Bachchhan, in one of the film’s most hilarious moments refers to as a ‘toothpick’). A few hiccups later, they gain Bachchhan’s confidence, even convincing him to star in his own film. And because a hero plays the villain, his violence and criminality is justified by a sob-sob backstory which has Jacqueline Fernandez and her hardly-improved accent appearing in three scenes, and an abrupt change of heart on Bachchhan’s part when his film turns out to be not what he expected.

When it comes to ticking off the boxes of a masala film, Bachchhan Paandey has all the ingredients, even though most of them don’t come together to make a cohesive whole. The unique blend of comedy and carnage that made Jigarthanda more than watchable, is only sporadically present in its remake, most of which comes off as forced. Samji fashions his film as a spaghetti Western, right down to the grainy sepia palette (the cinematography is by Gavemic U. Ary) and Julius Packiam’s background score, but what was a novelty done right in Dabangg doesn’t come off as compellingly in Bachchhan Paandey.

Akshay Kumar has the triad responsibility of being hero, anti-hero and also bringing on the laughs in this film. That’s a little too much to ask from even an actor of his experience, even when Bachchhan Pandey is being tutored by Pankaj Tripathi. Tripathi — in what is clearly a role done for commerce and not creativity — pops in for a while in Half Two to give acting lessons to the gangster. That kind of translates into an aside that is sure to invite sniggers, one which the makers probably put in inadvertently. Seema Biswas, who shot into the spotlight as the fierce ‘Bandit Queen’ plays the mother of the gangster here. She has two scenes and one dialogue. Theatre veteran Dolly Thakore, again in a minuscule role, looks like she’s reading her lines straight out of a teleprompter. But Arshad Warsi — whose comedic chops are wasted here — being referred to as a ‘second hero’, with even a reference to how Circuit (played by him) stole the thunder from the leading man in the Munna Bhai films, is a clever nod.

The rest of Bachchhan Pandey, however, isn’t as clever or compelling. Bachchhan’s attempts to play Bolly hero bring on some laughs, but none are as hilarious as Nana Patekar’s angsty don Uday selling kaanda and trying to ride a horse during a film shoot in Welcome. In fact, the film, like Housefull, tries to mine laughs from unfunny sources. A character who stammers is named Bufferia (a wasted Sanjai Mishra) while a henchman who hasn’t yet managed to fire a bullet is called Virgin (a pitiful Prateik Babbar). There is another called Pendulum, but we can’t quite remember why he’s named so. Could it be because we wanted to swing ourselves out of the movie theatre right after the first half hour?

Akshay Kumar draped a sari, donned a wig and stuck on a bindi to play a wronged transgender (or rather its spirit). Full marks to a leading Bollywood superstar for shedding off his macho image for a part. Only if Laxmii hadn’t ended up as one of the worst films in recent times.

This reincarnation comedy, the fourth film in the Housefull franchise and directed by Farhad Samji, had Khiladi Kumar sporting a bald pate and moustache to play a 15th century monarch named Rajkumar Bala Dev Singh. It translated into a few laughs and the earworm Shaitan ka saala.

The man turned birdman, quite literally, in the standalone sequel to Robot, in which Akshay’s Pakshi Rajan — with the prosthetics rendering him unrecognisable — played the nemesis of Rajinikanth’s Vaseegaran.

Though it was only a cameo, Akshay as a gay man — in a man-bun and flowery shorts — stole the spotlight in this John Abraham and Varun Dhawan starrer.

Thick moustache to a face full of hair, Akshay sported quite a few looks in this action film in which he played a self-styled vigilante.