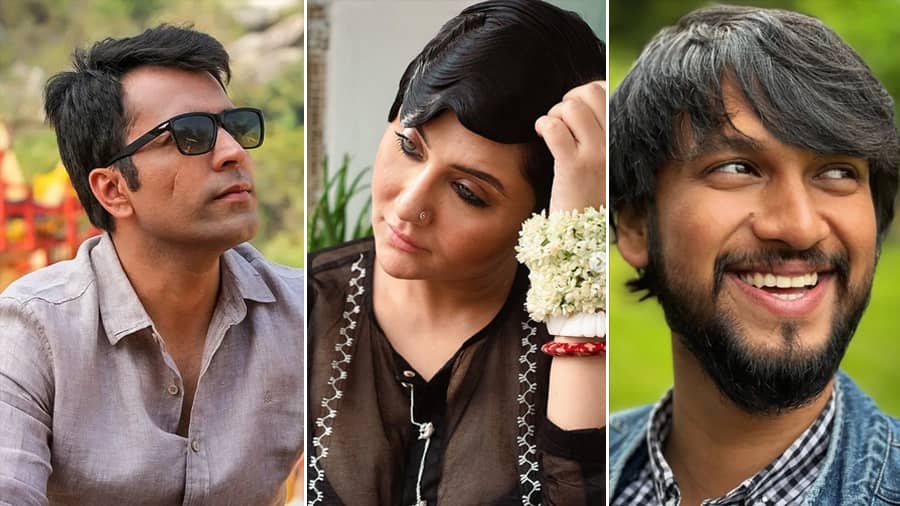 Promoting his upcoming directorial venture Boudi Canteen, Parambrata Chattopadhyay recently paid a visit to his alma mater, Jadavpur University, after 20 years. The actor also stopped by Milan Da’s canteen, which has become a  “de facto Boudi Canteen as Krishna Boudi has been running it for the last four years after Milan da’s passing”. The film releases tomorrow, September 30, and also stars Subhashree Ganguly and Soham Chakraborty.

Swastika Mukherjee: If looks could kill

Srijato and Joy Sarkar have shared a sneak peek into their Mumbai diaries with Shreya Ghoshal. The trio are recording a few songs for Srijato’s directorial venture Manabjamin.

Rukmini has declared who her Kacher Manush is and it’s not Dev! The film releases tomorrow, tomorrow, and stars Prosenjit and Dev along with Ishaa Saha.

The actress has draped herself in a pink and white sari on the way to Baruipur Pragati Sangha. And guess who accompanied her? It’s none other than Abir Chatterjee, who compliments Paoli in a yellow kurta and white pajama.

Nusrat Jahan: It’s that time of the year, what diet?

Lokkhi Chele Ujaan Ganguly’s “by the bay” photos raise the mercury — you need to check out the comment section for evidence.

Rafiath Rashid Mithila has shared some pandal-hopping moments where she met some fans. The actress is shown with her daughter Ayra.

We love Ankita’s fashion choices in her recent portrait shot. She is sporting a white t-shirt and showing the classic French manicure.

Here’s a glimpse of ice-capped Jungfrau in Switzerland where love birds Oindrila Sen and Ankush Hazra are currently holidaying.

Dancer-actress Sreenanda Shankar is currently in Muddenahalli Ashram in Karnataka. Catch a glimpse of her in the avatar of Durga.

Koneenica Banerjee is at the hospital as she continues to recover from a surgery. The actress has taken to Instagram to try a few viral trends to pep up her mood. We wish Koneenica a speedy recovery.