Advertisement
Home / Entertainment / A ring that came in a drone box!

A ring that came in a drone box!

Snapshots from the engagement-sangeet ceremony of actors Trina and Neel 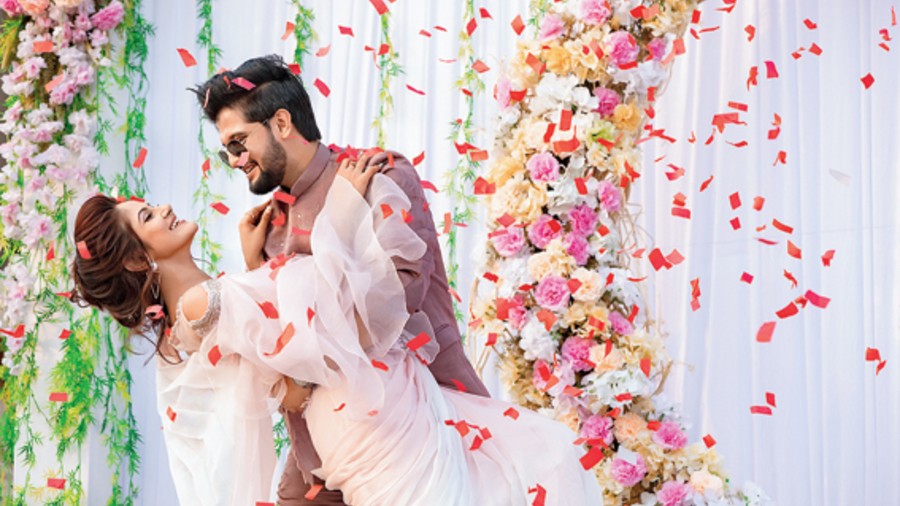 On January 9, actors Trina Saha and Neel Bhattacharya got engaged in a dream ceremony in the presence of family and friends. It was an engagement-cum-sangeet ceremony arranged at the rooftop of Topcat CCU that gives a view of the city skyline. The venue’s open-air sitting area and attic were decorated in two different styles for the two events. For the ring ceremony, the couple chose a classy decor with lots of whites and pastel shades. There was a bouquet of flowers made to look like a ring resembling the occasion. Neel and Trina chose a colourful decor for the sangeet ceremony.

In the morning, both of them chose to dress up in lighter hues and for the evening occasion they decked up in royal looks in blue and gold from Manyavar and Mohey. Their looks were styled by Sandip Jaiswal.

“I wanted to do a fancy proposal, since I didn’t propose her formally before this. It was sort of an understanding between us. I arranged a surprise for her during the ring ceremony. She knew that I would put on the ring on her fingers after she put it on mine. But I acted like I couldn’t find it. Then the ring came to us in a drone box and I knelt down to propose her,” said Neel. “That was the first time he proposed and it felt surreal. It was very emotional for me,” said Trina. “She was almost in tears,” added Neel. “I was really happy that my proposal came true the way I had dreamt it. I was very overwhelmed,” said Trina.

On the menu were the couple’s favourite dishes, a variety of mocktails, Italian and Indian cuisines. For the sangeet ceremony, both Neel and Trina matched steps with friends and family to Bollywood numbers like Dilbar dilbar, Chaar din, Dus bahane, O oh janey jana, Subha hone na de. Other than friends and family, colleagues from the industry were also present to join in the happy occasion and celebrate with the couple the beginning of a new journey in their lives.

“It is still sinking in for both of us that we are already engaged,” laughed Neel and Trina. The couple are set to tie the knot in February.