We revisit and rate other recent prosthetic jobs in Bollywood 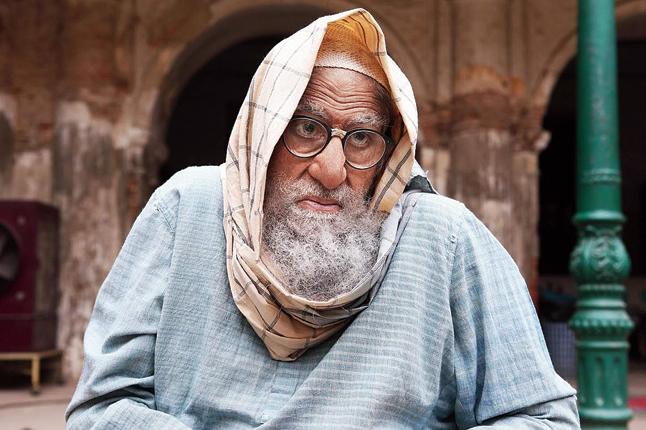 Fifty years in the business and yet you can trust Amitabh Bachchan to shock and surprise. ‘Who’s that?!’ we went in disbelief when the actor’s first look in the Shoojit Sircar film was unveiled last year. Puffed-up cheeks, thick glasses and a bulbous nose that instantly reminded one of Mr Rastapopoulos in the Tintin comics, it was a look that made the 77-year-old superstar unrecognisable and proved to be an instant winner, with Bachchan’s gait and demeanour complementing his out-of-the-box look of a snarky septuagenarian. As is the norm in most prosthetic-heavy productions these days, a team of experts was flown in from the West, with the actor required to sit on the chair for upwards of two hours every day for a whole month to don the look.

“As the days pass by, the comfort in the portrayal gets to be in an ease that shall be so needed in the final rendition, but yes the prosthetics take their pound of flesh and to underestimate its after-effects would be a fallacy,” Bachchan good-naturedly complained on his blog during shoot, carried out in the 40-degrees-plus Lucknow heat.

Well, from the looks of it, the effort has paid off, with the prosthetic work looking like a largely seamless job and not distracting from what we are pretty sure will be a natural performance when the quirky comedy, also starring Ayushmann Khurrana, streams on Amazon Prime Video from June 12.

The menace and macabre glee on Alauddin Khilji’s face was enhanced by the first-rate prosthetics used in the Sanjay Leela Bhansali blockbuster. Ranveer Singh not only travelled into a dark space emotionally to play the unhinged invader, he also became the man when it came to his look.

While the film’s stereotypical portrayal of the Muslim invader as a kohl-eyed, meat-chomping barbarian was aptly criticised, there’s no denying that Alauddin’s look — more make-up than prosthetics — gave a fillip to Ranveer’s portrayal. The long semi-dreadlocks, the kohl-lined eyes, the series of scars below the right eye, the deliberate darkening of the skin... they all embodied and enhanced Khilji’s evil, from dancing gleefully to Khalibali to wielding his sword ferociously on the battlefield.

Unlike most of the other names on this list, Deepika Padukone’s transition into playing an acid attack survivor was an emotionally overwrought journey. The Meghna Gulzar film, in which Deepika embodied both the angst and anxiety, fire and fortitude of real-life survivor Laxmi, required the actor to give up vanity for reality, with make-up and prosthetic designer Clover Wootton describing it as her “most challenging project”.

The horror of the violent act had to reflect on Malti’s (Deepika’s character) face, and Wootton used two moulds per day during the course of the shoot, with several prosthetic designs used to illustrate the various stages that Malti’s face — initially reduced to just a blob of flesh — goes through during the course of the film. The prosthetic work was spot on, making the viewer turn away in horror and yet empathise and relate with Malti’s predicament. “I’m very claustrophobic and having to sit on that chair through prosthetics for three-and-a-half hours every morning, breathing through one nostril for 16-18 hours a day, really took a toll on me,” Deepika had told t2 prior to release.

Did it work? Well, it did, with a luminous Deepika rising above the average bits, to make the pain and pathos of Malti palpable. Something that was also reaffirmed by Meghna who had told us, “What is interesting is that the prosthetics didn’t transform her, she became the prosthetics”.

Ranbir Kapoor pulled out all stops to ape Sanjay Dutt’s swag and swagger in Sanju. While Ranbir was spot-on with his body language, the responsibility to transform his face to resemble Dutt’s lay with prosthetic artist Sandesh Murkey, who got down to work, designing looks for the various stages of Dutt’s life. About seven-eight moulds were designed, with Murkey using Dutt’s pictures as reference, but not meeting the actor.

To look the part of an older Sanjay Dutt, Ranbir wore the prosthetics on the upper part of the mouth so that the cheeks would look puffy near the nose and below the eyes.

When it came to Dutt’s look from the ’90s, Ranbir had to look a little less aged and he wore the prosthetics in the lower part of his face as that would show the cheeks to be more puffy near the lips and the jaw bone would appear different.

Nine-time Academy Award nominee and three-time winner Greg Cannom got down to work on Shah Rukh Khan’s face to convert the 50-plus actor to look like a 25-year-old in this 2016 Maneesh Sharma film where SRK played both a superstar (a version of himself) and his obsessive fan.

While quite a bit of computer graphics and visual effects went into ‘shrinking’ and toning Shah Rukh’s body to become Gaurav, it was Cannom’s magic at work when it came to his face. From using an existing mould of Brad Pitt’s cheeks (yes, you read that right!) to slapping on extra eyebrows to completely altering SRK’s nose to make it appear much smaller (but retaining a smidgen of his trademark dimples), this was one hell of a complicated job that needed the actor to go under the brush for hours... in his inimitable style, SRK has joked that “most of the movie was made sitting on a chair”. Though a close look at the film will reveal Gaurav’s look as being inconsistent in a few scenes, the overall results were pretty praiseworthy.

“I couldn’t recognise myself!” Well, we couldn’t too! After all, what would Rajkummar Rao have in common with a 324-year-old tribal man?! That’s what the man played in Raabta, a film that oscillated between tripe and trash, with the 35-year-old actor’s cameo being one of its rare palatable bits.

Raj, who is known to push himself to places unventured for his parts (he subsisted on just coffee and carrots for that emaciated look in Trapped), plonked himself on the make-up chair for upwards of six hours every day, with a team from Los Angeles being flown in for the look, which was picked and perfected after six trials. Besides the prosthetics that covered his entire face and body, Raj also had to sport accessories and tattoos. This was one clear winner. We wish the film, as a whole, had put in even half that effort.

The 2018 big-budget spectacle, a sequel to the blockbuster Robot, will not go down as one of Rajinikanth’s biggest hits. But there’s no denying that Akshay Kumar brought in the right amount of menace to his supervillain ‘birdman’ called Pakshi Rajan, a lot of it courtesy some rarely-seen-before prosthetics.

It took three people over three-and-a-half hours every day for 40 days to bury the good-looking Kumar under layers and layers of prosthetics and make-up that not only consumed his face but a large part of his body too. Spikes that resembled fish scales, long nails, sharp teeth and exaggerated eyebrows were the standouts of this look that required a lot more discipline from a naturally disciplined Akshay, and that which he has confessed was “the toughest” shoot of his career.

“When you are shooting with prosthetics all over your body, the pores on your skin can’t breathe because there is no oxygen since your whole body is packed. So, for the five to six hours that I used to shoot, all the sweat remained inside my body. When they used to remove the whole thing, I used to smell of sweat,” the star has been quoted as saying. He was on a liquid diet during the whole time he had his prosthetics on, and could remove them only after a two-hour sitting.

2.0 may not have hit the mark but Akshay’s look mostly did, making us go from “ewww” (not in a bad way) to “wow”. Some bits didn’t work so well but all’s forgiven on the back of the effort put in.

It took quite a bit of work to transform a largely scrawny Nawazuddin Siddiqui into Bal Thackeray in the early 2019 biopic. Nawaz — no stranger to prosthetics, having slipped on false teeth and a broader forehead in Mom — was made to wear a prosthetic nose, chin piece and also sport a receding hairline to portray the firebrand Shiv Sena supremo.

While the prosthetic work was largely top-notch — the nose, in particular, sat easily on Nawaz’s features, which are totally different from Thackeray’s — the character also came across as convincing because Nawaz matched his body language to his changed features.

This Nitesh Tiwari hit that focused on a group of 40-something bum chums regrouping in the face of tragedy and rewinding to “the best days of their lives”, required quite a bit of prosthetic work on its principal players. While some like Sushant Singh Rajput’s bearded transition required minimal work, make-up artist Preetisheel Singh had to work harder on ageing Tahir Raj Bhasin (who played Derek), Varun Sharma (as Sexa) and Tushar Joshi (who played Mummy)... with mixed results. While Sexa worked more or less, Derek and Mummy’s hairline transformation wasn’t done well, with the results being one of the rare jarring bits of an otherwise almost-flawless film.

It was once again Fan man Greg Cannom who was brought in to transform Rishi Kapoor into a 90-plus cantankerous but lovable grandad in Kapoor & Sons. Producer Karan Johar reportedly spent upwards of Rs 2 crore on Kapoor’s look alone, that combined a blend of prosthetics and make-up. The actor had to spend five hours on the make-up chair every day, with Cannom taking weeks to design his ‘face’. As many as eight applications — bald cap to nose, cheeks to quadruple chin — were slapped on to the mould of Kapoor’s face and the trick lay in blending all of them together in a way that seemed like second skin. The results were appreciable — enhanced by the unmistakable twinkle in the late actor’s eyes, especially when they rested on a scantily clad Mandakini on his “i-Papad”

Amitabh Bachchan, then in his late-60s, underwent a complete transformation to play the part of a 13-year-old boy suffering from the genetic disorder called progeria in Paa.

If there is one man who has aced the prosthetic game, it has to be Kamal Haasan. The actor sported 10 different looks as 10 characters in the 2008 film Dasavathaaram and has also used prosthetics in films like Vishwaroopam and Indian. But we pick his 1997 film Chachi 420 — a remake of Robin Williams’ rip-roaring Mrs. Doubtfire — in which he not only easily slipped into a sari but also transformed remarkably — puffy cheeks, thinner lips, et al — to nail the part of a 60-plus woman.

It seems almost criminal to bury that beautiful face under any kind of make-up, but a lot of the intrigue in Dhoom:2 stemmed from the various looks that Hrithik Roshan’s slick thief Aryan sported, from a British queen to a grizzled old man.

Amitabh Bachchan, then in his late-60s, underwent a complete transformation to play the part of a 13-year-old boy suffering from the genetic disorder called progeria in Paa. The actor not only went down several feet in height, but also slapped on heavy prosthetics — a bald head, bigger eyes, broken teeth — that he had to reportedly keep on for a whole month, removing them for only a few hours every day.