The French-Swiss filmmaker died on September 13 at age 91 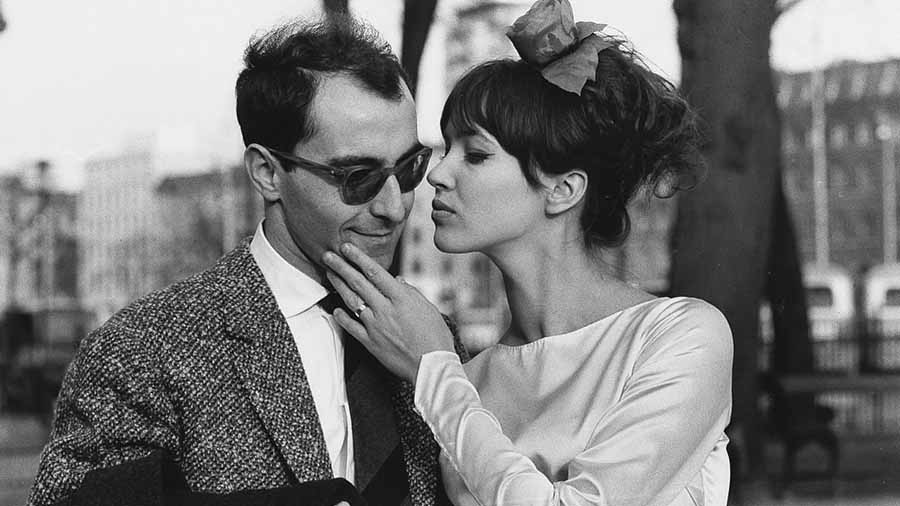 No one has turned cinema, as we know it, on its head like the legendary Jean-Luc Godard, who breathed his last yesterday at the age of 91. Our very own Satyajit Ray once remarked, with his tongue firmly in cheek, that film critics’ tireless endeavour to put the French-Swiss auteur in a box is akin to putting a square peg in a round hole.

One of the instantly recognisable names in international cinema, Godard became the most recognisable face of the French New Wave movement in the 1960s with his handheld camera work and jump cuts. Here we take a look at five French New Wave films by the auteur that are a must-watch for every cinephile.

Breathless (À bout de souffle) is a crime drama that put Jean-Luc Godard on the map of world cinema. Francois Truffaut may have kickstarted the French New Wave in 1959 with his The 400 Blows, but Godard legitimised the radical film movement with his Breathless the following year.

The film follows Michel (played by Jean-Paul Belmondo), a dangerous criminal who models himself on the film persona of Humphrey Bogart. He is on the run after killing a police officer. Breathless broke all the existing norms of French cinema at the time. Godard’s unconventional storytelling and jump cuts have been inspiring generations of filmmakers since the film’s release.

A still from A Woman Is a Woman.
Twitter

In the immediate aftermath of World War II, France, America’s wartime ally, took to American pop culture. The post-war French youth weaned on American cinema and grew to take the medium by storm in the guise of the French New Wave. A Woman Is a Woman (Une femme est une femme), the second film by Godard and his first in colour, is a homage to the American musical. The film chronicles the life of a 20-something striptease dancer (played by Anna Karina), who offers her boyfriend an ultimatum: get her pregnant or she’ll find a man who will.

From the stylised editing to the experimental use of sound, A Woman is a Woman is playful, bordering on the delirious, with clever gags, a bit of the risque and the luminous charm of Karina, who went on to become Godard’s muse.

Following the widespread success of his earlier films, Godard embarked on a mission to incorporate his personal politics in his films with The Little Soldiers or Le petit Soldat. The film begins on May 13, 1958, the day of an attempted coup in Algeria. It follows Bruno Forestier (played by Michel Subor), a photojournalist who is a member of a right-wing terrorist group working for the French government. He is ordered to murder a professor accused of aiding the Algerian resistance. However, he is in love with Veronica (played by Anna Karina), a young woman who has worked with the Algerian fighters.

The film was notable for its attempt to present the complexity of disputes rather than pursuing any specific ideological agenda. Through this film Godard comes down hard on France’s colonial history and glorifies the themes of freedom and love over patriotism.

Contempt (Le Mépris) was an adaptation of the Italian novel Il Disprezzo (A Ghost at Noon) by Alberto Moravia. The film shows Paul Javal (played by Michel Piccoli), a playwright, who accepts an offer from American producer Jeremy Prokosch to rework the script for German director Fritz Lang’s screen adaptation of the Odyssey. However, during the filming on the island of Capri, Paul and his wife Camille fall into an elaborate trap of lust that rocks their marriage.

Godard’s personal admiration of Fritz Lang and his fondness for Greek literature were on show in Contempt. However, being true to his French New Wave roots, Godard indulged in a meta-exploration of the world of cinema by showing the stark contrast between European films and Hollywood’s way of filmmaking.

This science fiction film combines dystopian sci-fi elements with film noir. Set in the future, the film chronicles Lemmy Caution’s secret agent, who poses as a journalist to enter the city of Alphaville. His mission is to kill the creator of Alphaville and destroy the dictatorial computer which controls everything in Alphaville. The film features Hollywood actors Eddie Constantine and Howard Vernon alongside Anna Karina and Akim Tamiroff in prominent roles.

In Alphaville, Godard breaks away from all the conventional aesthetics and notions of science fiction. Without using any special props or futuristic sets, he shot the entire movie in real locations all over Paris. The night-time streets of the French capital become the streets of Alphaville, while modernist glass buildings represent the interiors. The movie won the Golden Bear Award at the 15th Berlin International Film Festival in 1965.