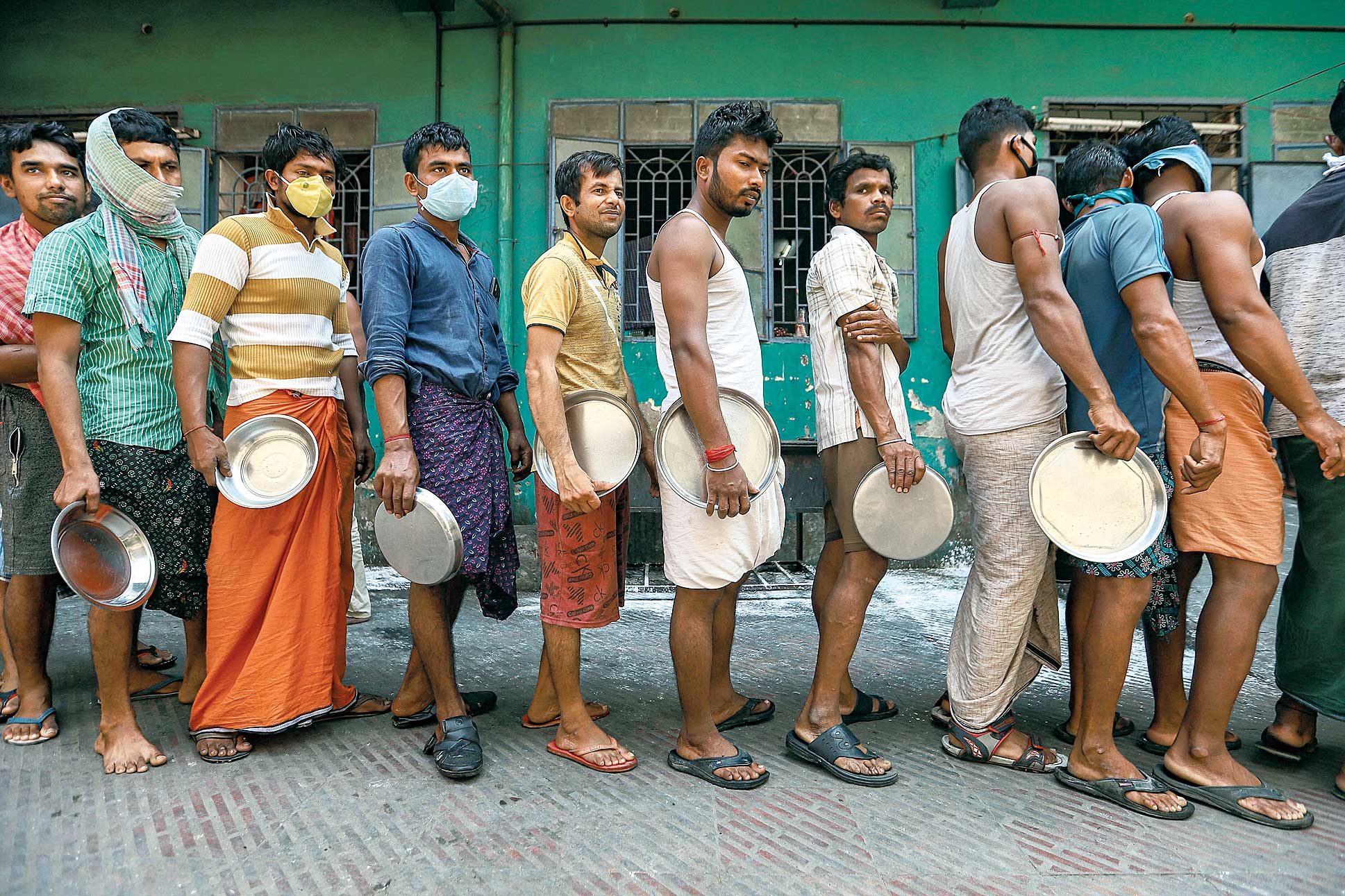 On Friday, said officials, about 5,000 people gathered outside the shelter, the imperative of food overriding the necessity to maintain at least one metre social distancing and the risk of infection.
PTI
PTI   |   New Delhi   |   Published 28.03.20, 10:15 AM

Every day, Rampal leaves his rickshaw at the edge of the road near Delhi's Nigambodh Ghat and joins a queue of hundreds, sometimes thousands, at a government run shelter for food gnawing hunger subsuming the coronavirus threat and the need for social distancing.

'Hunger will kill us before any disease does', said the rickshaw puller from Jaunpur in Uttar Pradesh, trapped like many thousands in a city that is not their home and unable to either return or earn money in a 21-day lockdown that has brought life to a grinding halt.

Battling hunger and joblessness, he knows about coronavirus and its perils but it's an awareness that barely registers in his consciousness as he waits, one among the large crowd of daily wagers, homeless people and beggars outside the Yamuna Pushta shelter.

On Friday, said officials, about 5,000 people gathered outside the shelter, the imperative of food overriding the necessity to maintain at least one metre social distancing and the risk of infection.

Most are without masks, leaving them vulnerable to the disease that has affected more than 590,000 people worldwide and claimed over 27,000 lives. India has reported more than 820 cases and 19 deaths.

'What option do I have? Where else can I go? I haven't earned rupee in two days, Rampal, who had been waiting for about an hour, told PTI.

The situation is the same in other shelters.

The Delhi government has asked the Delhi Urban Shelter Improvement Board (DUSIB) to provide free food to homeless and migrant workers who have been hit hard by the lockdown.

The DUSIB runs 234 night shelters in the national capital.

According to DUSIB member A K Gupta, they can provide food to 18,000 people per day but end up serving double that sometimes.

The government spends Rs 20 per person on food, which includes four chapatis or puri, rice and lentils.

Due to the lockdown, a huge number of people are thronging the night shelters in search for food. Yes, there is some strain but there is no shortage of raw material, he told PTI.

Our staff is taking all precautions -- they wear face masks and wash hands regularly -- and following social distancing measures. But it is not feasible to ask people converging at the night shelters to maintain the mandatory one metre distance between them. Their first priority is food, Gupta said.

Videos of serpentine queues of people, mostly men, sitting close on the floor as they are served their meal have been doing the rounds of social media. Rights activists say a large number of people have no idea where to go.

After food rights campaigners and workers' unions complained that the number of night shelters was not enough, the Delhi government on Friday said it will provide free lunch and dinner at 325 government-run schools across the national capital.

'Delhi has a huge migrant population and a very large number of daily wagers. People working in the unorganised sector often don't have large savings. They fall into destitution very quickly. Unless there is decentralisation of cooked food, a very large number of people will start reaching these centres,' food rights campaigner Anjali Bhardwaj told PTI.

'In this time of curfew, there's no public transport and people cannot walk for long to reach the night shelters. So, a nearby anganwadi or school would mean that these people have easy access to food and the place is not overcrowded, thus helping them keep a distance between them,' she added.

The Delhi Sikh Gurdwara Management Committee, NGOs and civil society members have been lending a helping hand and providing food and water to hundreds of such homeless people and migrant workers who have no idea where to go.

Geetanjali Chopra, founder and chairperson of the NGO Wishes and Blessings that has been providing food to those stranded and stuck, said her organisation collects foodgrain directly from people from their homes and passes it on to the needy.

But many continue to be hungry.

In one video shot by a journalist, a rickshaw-puller called Munna can been seen eating stale rice from a polythene bag.

On a normal day, I would earn around Rs 300. Today, I got only one passenger who gave me Rs 30 and some rice to eat, he said, wiping beads of sweat from his forehead.

Kashi, a beggar, who sits under a foot-over bridge in Jangpura, told PTI he is dependent on benevolent passersby whose numbers have reduced due to the lockdown.

Left with nothing to eat, he forages for food in a garbage bin behind a toilet.

Unaware that food is being provided at night shelters and Delhi government schools, Jagat Pal, a rickshaw puller, said he has been borrowing money from his friends every day.

Many others like him, dependent on their daily earnings, are also unaware that food is being given free, he said.

Chittu Yadav, 55, took the risk of taking out his rickshaw despite the threat of police action to earn a few bucks. My kids are hungry and I have no money left, he said.

Yadav said he did know that the government is providing free food at shelter homes and state-run schools.