A man who made a trophy of being a Calcuttan

Meet Mr Gulab of Calcutta's New Market, as it once used to be — a man who made it his everyday business to put the shine and polish on others’ triumphs 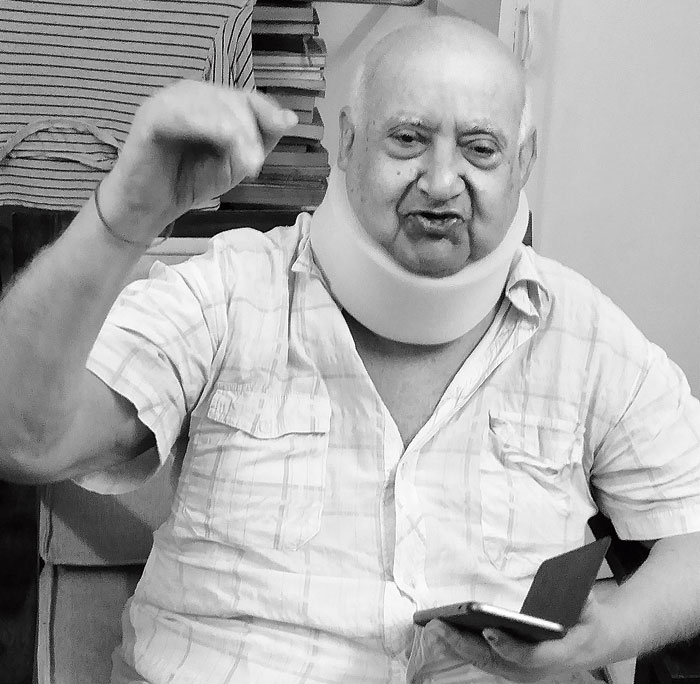 Mr Gulab by any other name would be just as well-known in the city of his birth, that is for sure. Long before I knew of him, I heard his name. Uttered over Darjeeling and mismatched pieces of bone china. Over beer, after a round of golf. While reaching for a slice of Nahoum’s fruit cake or cheese straw. Through bifocals covering cataract blue eyes. Mr Gulab — the name seemed contiguous to reminiscings about Calcutta of a certain period for a certain set. Mr Gulab, a name that was missing a half. A name that was almost never preceded or followed by a descriptor. The women stressed on the “Mister”. The men pronounced “Gulab” like an exclamation. Most rarely bothered with an onward story, as if it were not a name but a self-contained time capsule.

“Have you got yourself a nice strong cup of tea, my dear?” asks the voice at the other end. In the last few minutes Mr Vashu Gulab and I have started, stopped and moved conversation from mobile to mobile, mobile to another mobile, landline to mobile, before returning to mobile to first mobile, all in search of decent telephony. (He moved to Bombay in 2015.) But there is no shadow of annoyance in the 85-year-old’s voice. Over the next hour or so, Mr Gulab shares his story with me. And I discover he favours a ramrod narrative. Beginning at the very beginning, never pausing till the end.

The original Gulab was Mr Gulab’s father. Gulab Rai Varumal was born into a Sindhi family in Hyderabad, Sindh (now in Pakistan) in 1900. A posthumous child, he did not have much of a boyhood. Says Mr Gulab, “By the time he was eight he had got himself a job; filling up the pots of water at a jewellery shop and offering customers a drink.” In 1916, Gulab Sr moved to Calcutta, where the same jewellers — B. Motiram — had a shop in New Market.

Over the next couple of years, the young man worked his way up and became the shop manager. And that is how his story would have remained had he not saved up a thousand rupees and turned up with the money at the office of the superintendent of New Market. Says my teller, “Those days, the man who held the post used to be an ICS officer.”

To get back to our story, Gulab Sr paid the superintendent Rs 1,000 upfront as advance booking money for a shop and took the next train to Sindh for his annual holiday. Two days later, he had barely got off the train, reached the family home and was taking his bath when a telegram arrived. It read: “Got shop. Come quick.” The sender was the superintendent.

And that is how Shop No. A46 came to be in the ownership of the family in 1931. It was a 40 square feet of real estate, but for the soft-spoken young man it was the launch pad of a carefully nurtured dream. He called the shop V. Gulab’s.

Even when he was in the employ of the jewellers, Gulab Sr had brought into the business his love for timepieces. Now, he decided to make them his mainstay. He opened shop with a piece each from companies such as Favre Leuba and West End Watch Co. “Given to him on approval, without payment. He would sell a piece and immediately pay up and get another, on approval,” Mr Gulab explains the nitty-gritty to me. He tells me how during World War II no one could sell watches without permissions. “It was to eliminate blackmarketing,” he adds.

Over time, Gulab Sr built a reputation. British officers and other customers liked him. Says Mr Gulab, “I wouldn’t say they [the British] would have a cup of tea with him. But he had no trouble conducting his business.” And the going remained good even after Independence. Across the road from New Market was Dey’s Medical Shop and Mr Gulab remembers how Mr B.N. Dey, his father and the then chief minister of West Bengal, Dr B.C. Roy, would enjoy a spot of gupshup at the shopfront every morning. This was around 1948-49.

In the meantime, Gulab Rai Varumal’s little boy was growing up. Shored up by his success, the father made sure that his son got the childhood and education he had had to forego. In the 1940s, when the city was in the grips of the Great Riots, Gulab Sr sent his son to St. Joseph’s School and College, North Point, in Darjeeling.

In 1952, Mr Gulab returned, a strapping young man of 18. He says, “Those years changed me. I learnt to take decisions. I became a person.” After completing his Intermediate in Science from Calcutta University, he joined his father at the shop.

The Calcutta he returned to was a different city. He says, “India was independent, the British were leaving. Even New Market was much changed.” Initially, Mr Gulab would help his father at the shop for a few hours and spend the rest of his time playing cricket at the Rajasthan Club. “I considered myself a bit of an all-rounder,” he says with part pride, part indulgence for his younger self. I imagine a figure in whites running between wickets under a sepia sky.

The young Mr Gulab was not so taken up with timepieces. Besides, in the changed times, imports were restricted and it was difficult to make a decent margin. The shop used to stock some metal steins or beer mugs. One day some customers came around, bought a couple and asked for more designs. When they returned, the new designs were there. Says Mr Gulab, “Silver beer steins were awarded at the regattas. The rowing clubs kept coming back for more.”

It seems for the longest time after Independence, Calcutta had only one army regiment inside the Eastern Command headquarters. But after the Sino-Indian War of 1962 more and more battalions settled around the city. Mr Gulab got a request to make mementos for the army. He recalls, “We had never done things like this. But I thought, why not try. And thereafter, orders started pouring in. From different battalions, from Northeast battalions…”

One thing led to another; now civilians and corporates started to approach Mr Gulab. He rattles off, “Golf trophies for the jute mills. Mementoes for Dunlop. Shields for the tea companies of Assam. Trophies for The Statesman’s vintage car rally, The Telegraph debate, the Calcutta Club... There were orders from Balmer Lawrie, ITC...” He did some “big stuff” too, which he shares with me on condition I don’t write about them. But why? For the first time his voice loses its jokiness and he says, “Because that would be advertising.”

V. Gulab’s buzzed with customers and business. I have it on good authority that at some point the ladies who went shopping to New Market treated the place like a husbands’ creche. Go sit there till we finish — that kind of thing. Mr Gulab, it seems, played the perfect host, chatting with his visitors and customers alike over tea and heart-shaped cakes from Nahoum’s. It could also be jhaalmuri or chicken rolls from Nizam or Badshah. “It gave me a break from looking at my books,” is all that he says now. What did they talk about, I ask. He replies, “Tea gardens. Places. Life.”

I am not sure at what point to wrap up Mr Gulab’s story. Should I end at 2012 when he sold his shop? Or should I end where he tells me how he has no regrets about packing up because timeliness is all? Or should I end with the information that he is still working on the rare Calcutta order or two, all those miles away in Bombay? As I think, I am filled with certitude that this does not need a wrap anymore than does a snapshot. And so I leave you with a portrait of a life, of a living and a city as it used to be, many blooms ago.