Advertisement
Home / Culture / People / A man who has everything to hide

A man who has everything to hide

Nandi calls himself a first-generation tanner, but sitting in the hall of his factory, it occurs that that is just a technicality 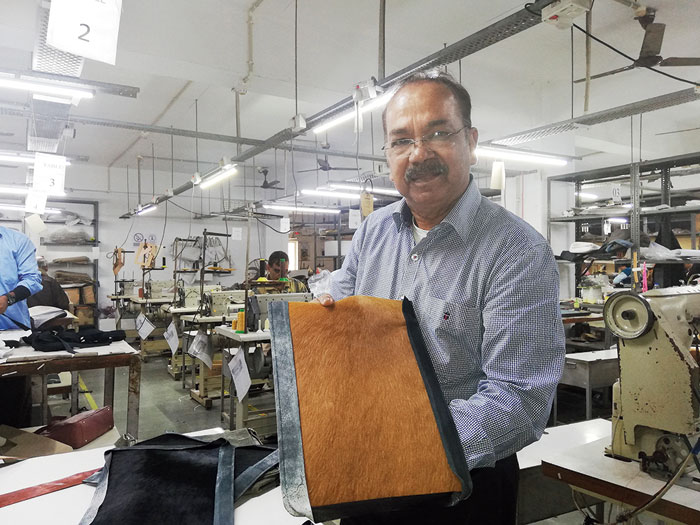 There is a misconception that it was the Muslims who dominated the tanning industry, he says. It is difficult to tell his age from either appearance or agility, but from time to time Tapan Nandi scratches his head and wrings his hands to recall the names of people and events. He continues, “It was rather the Chinese refugees (read immigrants) who had the technical knowhow of this business.”

Nandi calls himself a first-generation tanner, but sitting in the hall of his factory in Bantala on the southeastern fringes of Calcutta, it occurs that that is just a technicality.

The hall has been divided into two units. To the right, there are open shelves with ladies’ handbags, wallets, key-holders and whatnot on display. And to the left, there is a table stacked with files and papers. That is Nandi’s workstation. On the floor, there are some wooden crates. “Those have come back from an exhibition in the US,” says Nandi. Indeed, it is perhaps more accurate to call him a leather enthusiast than a tanner.

Nandi joined the trade in the 1970s. He is almost apologetic for not having a hard luck story to share. His manner is affable and he is very literal and clinical. “It was not due to any financial problem that I started my career early. Neither was it because I was not interested in academics. I was a good student,” he clarifies. Hard luck or no, it is a story of a stray passion, of starting out from a small room in north Calcutta with three labourers and getting here, a full- fledged factory for leather goods with a workforce of 600-plus.

He returns to Topic 1, continues to foreground that tanning was not a Muslim-only industry in the 1950s and 60s. He talks about the owner of Canton Tannery, Michael Lin, who taught him the basics. According to Nandi, Canton Tannery was the oldest tannery of Calcutta and one Sanjay Sen was one of the pioneers of the leather industry. Marwari businessman Shyam Murarka set up the city’s first modern tannery in Kidderpore.

But Muslims did play a large part in the industry, as they were in control of the raw material, which in this case is the skin of the animal. Nandi talks about Gulab Nami, a small-scale manufacturer who taught him how to craft leather. He says, “Muslims were otherwise low on entrepreneurship and also on the technology aspect. The labourers were Hindus, Bengali and Bihari, but not Muslims. And what the Muslims mainly sold were goatskins. Cow and buffalo hides were available in China Town. He says, “In fact, 90 per cent of the cow hide I used to purchase was from the Chinese. Those days cow hides were available at Rs 2 or Rs 3 per square feet.”

A revolting smell hangs about the Bantala leather complex. But Nandi does not seem to notice. He talks animatedly about giveaways that distinguish good hide from bad hide — mosquito or bug bites leave marks that will show only after the first stage of tanning. “Also, it is very important to know where and under what condition the animal has been reared. This is something only a butcher knows,” he adds.

He goes on about the technique of rubbing salt on raw hide to keep the hair intact. The need for it — “If the hair is gone, the skin will go bad.” The process thereafter — “Soak it in limewater to get the hair off and dip in water to wash off the lime. A few more steps and the leather is put out to dry.” He seems to have a chemist’s precision. But of course, he replies, he has a degree in chemistry.

As he climbs down the stairs he talks about the future of the industry, the pollution and the environmental hazards. “I can work for another 10 to 15 years,” he claims and walks swiftly down the corridor, way ahead of everyone else.

No country for tanneries