Advertisement
Home / Culture / Heritage / The only Greek of Calcutta

The only Greek of Calcutta 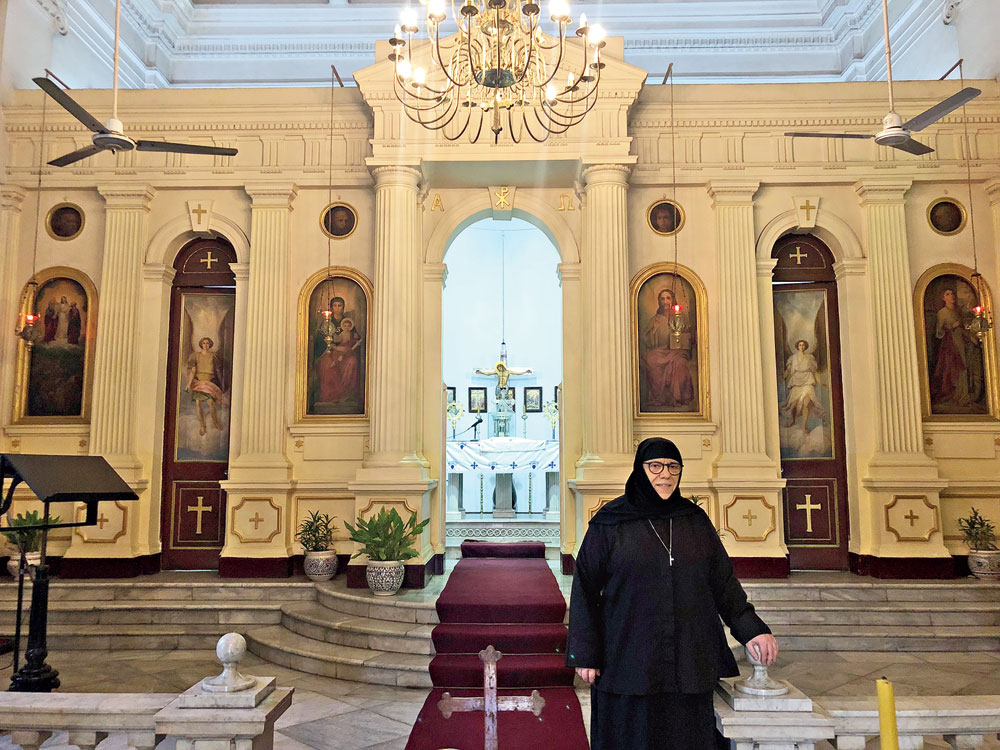 Sister Nectaria Paridisi sips on her Darjeeling tea. She is sitting in the lounge on the ground floor of the Greek Orthodox Church in Kalighat in south Calcutta and talking animatedly about a whole lot of things — the church, the state government’s lack of interest in the heritage property and its history, the uncaring locals. The room is full of antique furniture, framed photographs of bishops and Greek inscriptions. Flags of Greece, India and the bygone Byzantine Empire stand in different corners of the room. Our host is Father Raphael, a priest at the church. And the nun, Sister Nectaria, is the only Greek resident left in Calcutta.

To trace the beginning of Calcutta’s Greek association, however, we have to trek to Phoolbagan in the eastern part of the city. It is not difficult to miss the plaque at the entrance to the Greek cemetery. For one, the compound itself is surrounded by a gaggle of residential buildings and then there is the flurry of activity from the ongoing expansion work of the Kolkata Metro. Unlike some of the other cemeteries of the city, such as South Park Cemetery or the Scottish Cemetery, this one is smaller and way less verdant.

The caretaker, Basanta Das, says there are more than 200 graves here. Das, whose father and grandfather have also been caretakers here, says, “Not all the graves have bodies. Some of them are just epitaphs and tombstones.” Most of the graves have inscriptions in Greek. One such reads: “In the memory of Mavrody Athanass Mitchoo who died on December 9, 1855.” But the oldest grave is of Alexander Argeery, who died on August 5, 1777.

“From the 17th century, Calcutta was home to a Greek community,” says Sister Nectaria. In his book, Calcutta Old And New, H.E.A. Cotton writes: “The Greeks, like the Armenians, owe their association with Calcutta to the allurements of commerce.” According to Cotton, the first Greek settler of note in Calcutta was Hadjee Alexias Argyree, a native of Philippopolis, who came to Bengal in 1750 and earned his living as an interpreter.

In fact, it was Argyree who founded the first Orthodox Church of Calcutta. The story goes that in 1770, he set sail from Calcutta for Mocha and Jeddah. But his vessel was hit by a severe storm and was close to sinking. A devout, Argyree promised the gods that if he survived the peril he would found a church in Calcutta for its Greek inhabitants. True to his word, upon return to the city, he obtained relevant permissions and started to move on the purchase of a property. But then, he died in 1777.

Three years later the church came up. Writes Cotton, “…his family contributed a considerable sum, the remainder being made up by voluntary contributions, Warren Hastings heading the subscription list with 2,000 rupees.” Sister Nectaria confirms that the first Greek church to be built in Calcutta was indeed at Amratollah Street (in central Calcutta) and it had a cemetery adjoining it.

The first minister of the church was Father Parthenio, a native of Corfu, who settled in Bengal in 1775 and who is said to have sat for the figure of Jesus in German neoclassical artist Johann Zoffany’s painting, Last Supper.

The Greeks of Calcutta were a wealthy and powerful community. This is borne out by some of the epitaphs. One of them reads: “In the memory of Sir Gregory Charles Paul, Advocate General of Bengal, died on January 1, 1900.” Another grave belongs to Mavrodi Athanass Mitchoo, a planter.

According to Sister Nectaria, in 1922 another wave of Greeks fled their homeland. “A major reason was the genocide that happened at that time. Calcutta was an important port those days and so many came to Calcutta,” she says. The long and short of it, the Greek community continued to flourish till 1947 and, thereafter, began its denouement. Says Sister Nectaria, “Greeks started to leave India and move to London, Johannesburg, some moved back to Greece even.”

In 1924, the Amratollah property on which the Greek church stood was sold. Says Sister Nectaria, “The church authorities bought the Kalighat property and decided to move the cemetery out of town.” [At that time, Phoolbagan was not part of the city.]

The entrance to the Kalighat church building has two plaques on either side. The inscriptions are in Greek. Sister Nectaria translates it: “It is in memory of the Greeks who donated generously to build the first church in Amratollah... Their bodies are buried but their names will remain alive for generations.”

A tombstone in the cemetery at Phoolbagan
Manasi Shah

With the Greeks moving out, the church became non-functional and was finally locked down in 1972. And then, in 1991, it was reopened on the initiative of the Greek embassy. At the time, Sister Nectaria, who was posted in South Korea, was asked to come and take care of the church. Father Ignatios was in charge of the church. He also established the Philanthropic Society of the Orthodox Church.

According to the nun, the years of neglect had literally eaten into the church building. The whole place had been taken over by termites. She says, “It was just black. And I started cleaning through the layers of dirt. The termites had eaten all the ornaments of the Lord, the clothes, the books and even the wall clock.”

Sitting in the church that afternoon, it was difficult to imagine that scene. The wooden altar is now beautifully polished and has intricate panels and paintings related to the life of Christ, Virgin Mary, archangels Gabriel and Michael with their swords drawn out.

Calcutta is now emptied of its Greek populace. The church is frequented by local Christians and Sunday services are held regularly in Bengali. “Many Hindus also just come to pray. Sometimes I see Krishna monks, who come, sit, pray and leave silently,” says Sister Nectaria.

If she resents anything it is the attitude of the people in the neighbourhood. Breaking his silence for a change, Father Raphael says, “This is a Grade 1 heritage building [as declared by the Kolkata Municipal Corporation] and still we have to struggle for its maintenance.”

Sister Nectaria elaborates, “The local people force the guard to open the gates and act like this is their property. During Durga Puja, they put lights around the church. It is not as if we are against Durga Puja, but it is about the whole attitude. Whenever there is a festival, they block the church entrance and dump chairs, lights and sound equipment in the church premises as if it were a store room. And when I oppose, they call me an outsider.”

These days, Sister Nectaria visits the church only every other week. She remains busy in Bakeswar on the southern reaches of the city, where she is in charge of two orphanages under the Greek Church. Then there is the St. Ignatius High School, which is also under her supervision. And does she feel like an outsider?

She smiles, “Now? I am now half Indian.”

The diary of an unsung INA trooper