‘The British trained us to appreciate our culture’

Ravindra Singh Bisht, a former joint director-general of the ASI, speaks to The Telegraph about its great significance and urgent need for better protection of Indus Valleysites 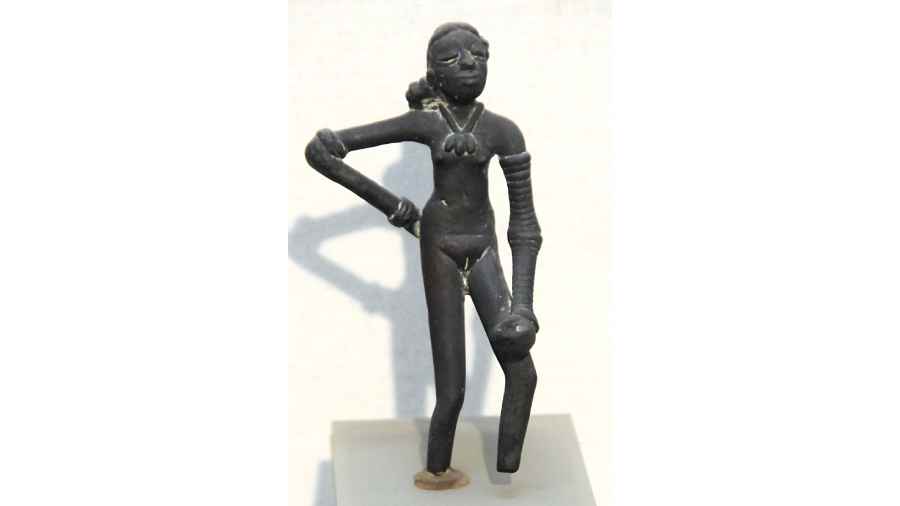 DANCER, DIGGER: The Dancing Girl of Mohenjo-daro, a bronze figurine found at the prehistoric site
Wikipedia
Prasun Chaudhuri   |   Published 20.11.22, 03:36 AM

Dayaram Sahani discovered Harappa on the banks of the Ravi in 1921 and Rakhaldas Banerji excavated Mohenjo-daro on the banks of the Indus in 1922. These discoveries of the Indus Valley Civilisation — also known as the Harappan civilisation — were announced by Sir John Marshall, the then director-general of the Archaeological Survey of India (ASI), in a report in the Illustrated London News on September 20, 1924. Both Mohenjo-daro and Harappa, major Indus Valley sites, are considered among the earliest and finest examples of urban town planning, civic engineering and refined aesthetic sense of its people. The report drew the world’s attention to India and evoked deep interest in the nation’s rich cultural heritage. Between 1970 and 2005, another archaeologist, Ravindra Singh Bisht, led excavations at Dholavira (in Gujarat), Rakhigarhi and Banawali (both in Haryana), which revealed Harappan settlements that flourished around 2500 BCE. In the centenary year of the Indus Valley Civilisation, Bisht, 78, who is a former joint director-general of the ASI, spoke to The Telegraph about its great significance and urgent need for better protection of the sites.

Why do you think we should celebrate the Indus Valley discoveries?

Until the discovery of the Indus Valley, the British had a poor opinion of India, its heritage and culture. The prevalent thought was that Indian civilisation dated back to 1200-1500 BCE. The “Aryans” were believed to be proto-Europeans, ancestors of the British and other European colonialists who invaded India and apparently civilised a barbaric people. But the discovery pushed our history back to before 3000 BCE. It even gave a boost to the Swadeshi movement of the 1920s.

But some Britons did take a keen interest in ancient Indian heritage...

See, the British were colonists who made their fortune from India. But they also introduced modern education, railways, post and telegraph services, and trained us so we could appreciate our own culture. Other colonists, such as the Spanish, destroyed temples, burnt historical texts and melted precious works of art of the ancient Aztec and Inca civilisations of South America. The British restored our temples and trained us to dig the ruins. Sir Alexander Cunningham, an army engineer, founded the ASI and excavated Buddhist sites such as Sanchi and Sarnath. Sir John Marshall, ASI’s director-general, led the excavations at Harappa and Mohenjo-daro. Mortimer Wheeler did seminal work for the Indus Valley Civilisation and even opened a training school at Taxila to train young archaeologists such as Braj Basi Lal. James Prinsep, an antiquarian, deciphered the ancient Kharosthi and Brahmi scripts.

Some say Marshall ignored the contribution of Rakhaldas Banerji and delayed the publication of reports of the discovery.

Initially, Banerji had been one of the blue-eyed boys of Marshall. He was promoted to the position of the head of the western circle of the ASI — the largest circle extending from Sind to central India. He was deputed to excavate the site that turned out to be Mohenjo-daro. But Banerji was also a staunch nationalist, an erudite person and a strongly opinionated soul. He ruffled the feathers of Marshall and was forced to resign. Marshall, however, was never antiIndian. He nurtured archaeologists like Nani Gopal Majumdar, another Bengali genius, who was killed by robbers while on duty in Sindh. Majumdar went on to discover 62 sites of the preHarappan era that pushed back Indus Valley’s antiquity beyond 4500 BCE.

Do you think the Indus Valley or its people were distinctive as compared to those in contemporary Egypt and Mesopotamia?

These people were quite egalitarian compared to those in Egypt or Mesopotamia. The excavated sites show that the rich and poor lived in similar houses. They didn’t waste wealth amassed through the exploitation of common people, unlike the Egyptian pharaohs, on the dead. You’ll hardly find any gold in the graves but rather exquisitely carved pottery or sculptures to honour the dead. Neither did they build colossal ziggurats like the Mesopotamians. They were truly educated people who believed in simple living and high thinking. They had impeccable aesthetic sense too.

Was climate change responsible for their destruction?

Yes. They faced acute drought due to decreasing rainfall and rapid desertification. Rivers dried up and they had to abandon such beautiful cities and disperse to small villages. Gradually, they migrated to greener areas in the east in Rakhigarhi (Haryana) and even towards the west in Dholavira (Gujarat). Climate change affected their material production and trade too.

Despite much effort, no one has been able to decipher the Indus Valley script. Some claim it is just a set of cryptic symbols and not a proper script at all.

I led a team at Dholavira that discovered inscriptions on a stone slab in 1999. The inscription may have been longer, but the stone was found broken into pieces. The stone must have been used as a lintel of the doorway of an underground chamber so that people would notice it. It may have been the name of the house, its owner or an incantation. In 1991, we found 10 large stone inscriptions carved in Indus script. The signs were made of thoroughly baked gypsum for a shiny effect. This is the reason I emphasise that Harappan society was a highly literate society.

We found seals, fish hooks, animal figurines, tablets, terracotta pottery, beads, bangles and copper tools with Indus signs everywhere in the citadel, the middle town, the lower town and the annexe of the Dholavira site.

Finally, how can we save these precious testimonies of a rich past from a society that has little sense of history? There has been widespread desecration of sites, artefacts have been stolen from mounds and auctioned openly on e-commerce sites.

During my tenure with the ASI, I marked a large number of unexcavated mounds in Rakhigarhi, Banawali and Dholavira as “protected monuments’’. Dholavira is now also a Unesco heritage site. Collecting artefacts or desecrating these monuments is a punishable offence. But the administration often can’t act because some of the mounds are thickly populated, where you can neither carry out excavation, nor displace people. Unless young people — especially school students — learn to appreciate our rich ancient heritage, such criminal offences can’t be stopped.