Advertisement
Home / Culture / Food / The return of the Gondhoraj

The return of the Gondhoraj

They say when life gives you lemons make a lemonade… but what happens when a lockdown doesn’t give you the king of lemons? 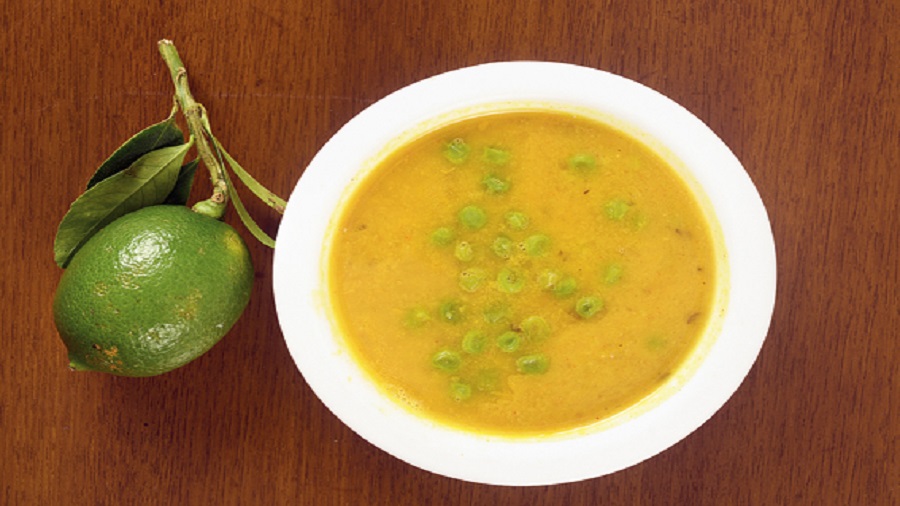 While Kaffir lime is a sort-of substitute for the gondhoraj when had with dal, it isn’t quite the same thing
Sourced by the Telegraph
Anjan Chatterjee   |   Published 03.10.20, 07:02 PM

Ever wondered what the ramifications of a lockdown can do to the adventurous palate of a probashi Bangali, living far away from the place of his birth? It’s a veritable lockdown, rather a freeze on all the delicious delicacies that he so relishes. Things like gobindobhog rice, hilsa fish, kathi rolls and biryani, so intrinsic to Calcutta, is like manna from heaven. And yes — most importantly, the gondhoraj, which I personally feel is God’s gift to mankind. I am inherently swayed by the whiff and the tang of this lemon. When it is consumed fresh its aroma has the sweetness of lemongrass coupled with the zing of Kaffir lime. So, imagine my state of deprivation when the lockdown commenced.

However, I started dreaming… a big dollop of snow-white rice landing on my plate, steam swirling up in the air, to be doused by a few drops of lemon, a slight poke to release the heat, and a blast of one-of-a-kind citrusy fragrance transporting me to a different world. I pinched myself to see if I was dreaming. But then, this was real. Today, I have a date with my first love — the gondhoraj.

Well, not to sound too boastful, but for me the gondhoraj is not just another lemon, it is much more than that. Everything that I savour must have a splash of the lemon. So, whether it is my first hot drink in the morning or an omlette or poha for breakfast, there must be a touch of the gondhoraj in every morsel of my intake. In fact, it might sound extremely whacko, but after taking my medicines the last taste in my mouth is a squeeze of gondhoraj. Trust me, it tastes divine!

The Gondhoraj Sea Bass has become a favourite on the Oh! Calcutta menu
Sourced by the Telegraph

The other day while going through the Oh! Calcutta Cookbook I saw the Gondhoraj Sea Bass listed there. It made me reminisce about the decision of experimenting with an unusual fusion of the gondhoraj with fish. There were many who were skeptical about this unfamiliar blend though they had to eat their words later because, today, this is one of the most sought-after dishes in the Oh! Calcutta menu. The Gondhoraj Sea Bass is also going to be introduced in Chourangi, which is our upcoming venture in London.  With things gradually easing out now, I have finally been able to fulfil my craving for this one and only priceless lemon. The return of the gondhoraj in my life has been nothing less than the script of a Bollywood spiced-up story!

Just wanted to take my readers on a short flashback. As the Covid-19 pandemic started spreading, in March, the government of India took a stance of announcing a complete shutdown of non-essential services.  I had just returned to Mumbai from Calcutta and I generally carry a few boxes of these fragrant lemons, but in the hustle and bustle of this pandemic it had completely slipped my mind this time.

Nevertheless, I immediately delegated my team in Calcutta to arrange for them to be sent by cargo.

As a tradition, my family and friends always wait eagerly for the lemons — to get drunk on its aroma. Inevitably, I was getting inundated with calls from everywhere, with just one line: “Dada, ki holo ebar gondhoraj pelam na toh; aamra toh cheye aachi?”

The final nail was put to my dreams when the West Bengal government announced that it had decided to bar flights to a few selected cities. Mumbai was one of them. I was slowly slipping into a ‘fragrant depression’. In fact, this part of the conversation must be kept under wraps as I even went to the extent of coaxing a few of my friends in the airline industry and persuading them to bring a dozen of these fragrant lemons. They could only empathise with me considering that no flights were operating to Mumbai from Calcutta.

I also tried persuading a few courier services with whom we dealt on a daily basis, but they too put up their hands citing hygiene and logistics being of paramount importance. Words fell short to express the immense pain and distress that it gave me on hearing from friends and family in Calcutta enjoying the fragrance. I had to find a solution. So, I shifted to an alternate lime — the kagzi lebu, or what we usually call Mexican lime, or nimbu in Hindi. This was  compensating for my craving for the real gondhoraj and trying to rediscover its fragrance — a fragrance that enveloped every aspect of my life. Right from my toothpaste to the last peg of the night (even my beer has a slice of the gondhoraj). It was a scenario which if expressed in Bengali would be stated as “Dudher swad gholey metano”.

The squeeze of gondhoraj adds a completely different dimension to the simple maachher jhol. Just a few drops of the juice of the gondhoraj on steaming rice releases awesome flavours
Sourced by the Telegraph

Finally, I decided to take a stand and this time a very definite one. It was around two in the afternoon one Sunday. My craving for this lemon was increasing in leaps and bounds and even knowing quite well that all our outlets were shut, I called one of my core team members and confided in him my problem. The next thing I hear is my doorbell ringing and a delivery person, from Asia Kitchen by Mainland China, was standing there with a box of what I would say is a close substitute of the gondhoraj — the Kaffir lime.

I felt a wave of excitement passing through me. Keeping my emotions in check I took the box and started to sink in its fragrance. Now, the Kaffir lime has a unique fragrance of its own.

It is strong and tangy and excellent for Asian curries. However, it not well suited for the simple dal (lentils) and rice or maachher jhol. I had to appease my inner cravings temporarily with the Kaffir lime but I really missed my precious gondhoraj. This arrangement was only a temporary appeasement for within a few days my mind again started sinking into a melancholic ocean. It recalled my favourite singer Kishore Kumar’s famous number, Koi lauta de mere beetein huye din.

My struggle to somehow get hold of the gondhoraj continued. I continuously kept pestering the courier services and friends in the airline industry. I even thought of getting it transported by the rail with the idea that I would later disinfect it with the best of disinfectants. But even this ruse was dashed to smithereens as train services did not resume. These were endlessly depressing days. The lockdown kept getting extended. There was no relief in sight for me! Then when the government announced that it will allow limited flights with multi-city stops my elation knew no bounds. I even thought of getting a consignment through this option, but had to give up on it as it was proving very expensive.

This state of acute doldrums continued for quite some time until, one fine morning, a very dear friend from Indigo (Calcutta) sent me a WhatsApp stating, “Dada, we are now back in the sky”. I just jumped up from my bed with a loud shout, singing and dancing and sending my family into a tizzy. There were simply no words to express my joy. Without any further delay I immediately put out a word to my Calcutta team to send me a few boxes of the gondhoraj via cargo flight. To reinsure that I will not miss the lemons I also requested one of my Indigo pilot friends to carry a few more in his baggage as a back-up plan.

Today, as I am penning down my tryst with the gondhoraj, I have been drenching myself in its divine fragrance. I realised its importance in my life. I had taken something as humble as this king of lemons for granted, only to realise what a large role it played in my life and am sure plays in the lives of others too. The return of the gondhoraj in my life was like ambrosia to a dehydrated man in the desert. Every facet of my mind and emotion sighs with a deep sense of soul satisfaction.

Anjan Chatterjee is the chief of Speciality Restaurants, which owns Mainland China, Oh! Calcutta, Cafe Mezzuna, Sigree Global Grill, Hoppipola, Asia Kitchen and more. And yes, he is a foodie