Advertisement
Home / Culture / Food / Rice On the Water, Anyone?

Rice On the Water, Anyone?

Panta bhaat is nothing to knock; it’s versatile and virtuous 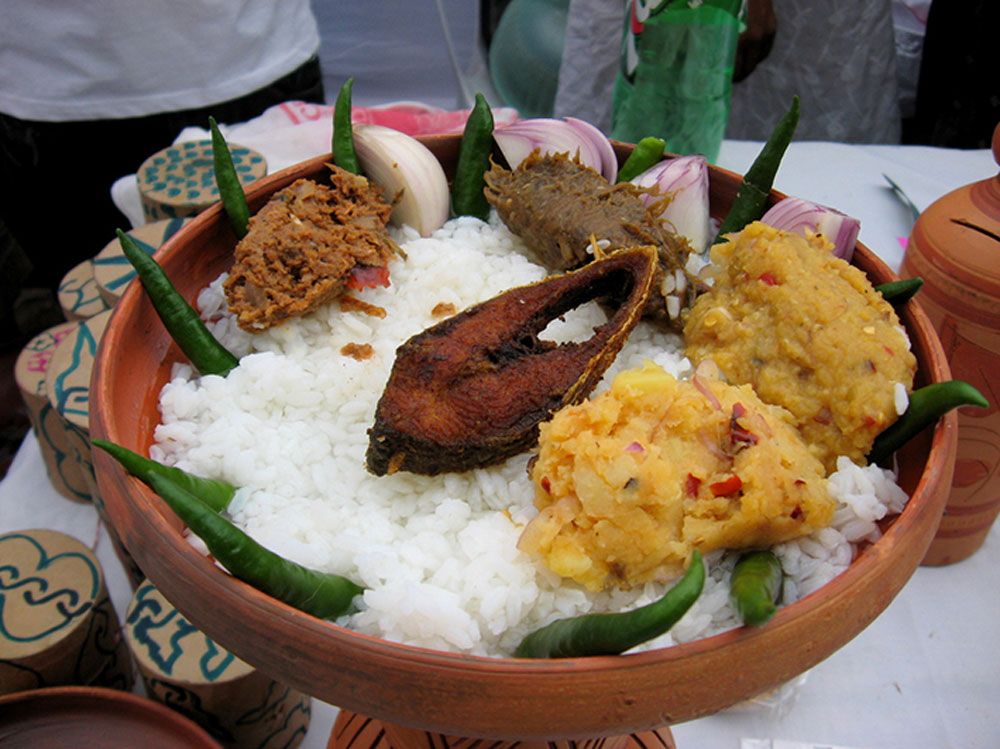 If you ask people what is the best way to combat the scorching summer — in terms of the food they eat — the answers you get will leave you with almost no surprise.

That’s because few are initiated into the simple charms of panta bhaat. But let me rewrite that sentence — few among those reading this would know of panta bhaat, or how it does a cool job of washing away the angst that comes from bearing tonnes of heat and humidity, on your mind as well as your body.

“Just imagine, yaar… Das Auntie gave me some watery rice and alu bhaji to eat,” a friend had complained. The anecdote from 20 years ago floats into my platter every time I sit with panta bhaat and begin to enjoy a certain oneness with it. Rana hailed from Uttar Pradesh; he was an urban educated aspiring engineer.

Summoned to Bhubaneswar to write an exam, he had to stay the night at a friend’s place. That friend’s mother lovingly served him panta — Bhubaneswar was simmering at that time and Rana was like her son, who was working far away from home.

One doesn’t quite know what transpired at the table that day, but Rana returned to teach us an important lesson in hospitality — to serve “watery rice” to the uninitiated eater isn’t the right thing to do; it is downright insulting.

For long years I believed panta was an Odiya thing. Pokhal or pakhala was a staple in many of the Odiya households I was familiar with during my growing-up years. Much later I learnt that Odisha has even set aside a Pokhal Bhaat Day in honour of this fare. Somewhere along the line I came to know that it was a favourite of the Assamese people too. Poita bhaat, they call it. Homecoming for little Pokhi — I saw in an Assamese film by the same name — meant a bowl of cold poita with crispy fried fish caught from the waters of the Brahmaputra.

For the Maithils of north Bihar, it comes christened as geel-bhaat. For Tamils, it’s pazhaya saadham; Telugus call it chaddannam. There’s a saying somewhere in the Northeast that eating panta bhaat gives you the strength of a tiger. There’s one in Bengali that goes — Panta bhaat e noon jote na, begun pora-e ghee. Meaning “Can’t afford salt for panta, and you want ghee in your roasted brinjal?”

Truth to tell, panta bhaat is widely known as the poor man’s food, an easy morning concoction from the previous night’s leftover rice that you fill your stomach with before you head off to the fields or to work in other people’s homes.

The fermentation, if you allow it to rest overnight, makes the nutrition quotient swell. Minerals and vitamins of the B group get hugely multiplied. Apparently it also helps keep fat at bay, is good for the bones and so on. Today, of course, panta bhaat has made its way to posh restaurant menus, especially during Bengali New Year. There are also celebrity chefs telling you how to prepare and serve panta bhaat in attractive pans and plates. Fancy food bloggers call it the Buddha Bowl.

And why not? Such endeavours are enlightening. I learnt, for example, that panta can be eaten with kasundi, and bits of mango cooked in dal, so on and so forth. But panta is good even sans accompaniment, with just the basic green chilli, raw onion and lemon.

A foodie friend tells me about at least 10 ways of preparing it, some of which include mixing it with curd or grated coconut or crushed gondhoraj leaves or pickle. A colleague had once said that as children, they would be given only panta bhaat to eat in times of intolerance, since it was the easiest to digest. “There was no escaping it, or its charms,” he spoke of it fondly.

A few days ago, as I sat down to a dinner of panta with crisp daaler bora and spicy mashed potato, a question was served to me — “Do you know there’s a song about panta bhaat,” asked my worldly-wise kind cook. Of course, I replied, and we regurgitated that Gulzar song from the film, Namkeen, in which Shabana Azmi and Sharmila Tagore sing “Panta bhaat e tatka baigun pora...” while they go about grinding grain and performing other housework.

It was a strangely good film, centred around a family of four women — an ageing mother and her three marriageable daughters — set somewhere in a remote Himachal village. There was much in the 1988 film that lingers, but what comes to mind spontaneously is this quaint song.

I’ll never know what inspired Gulzar to write those lyrics, but make a guess I can.