Popping a bottle of champagne in Champagne

Champagne owes its character to the interplay between micro-climate, soil, grape variety and expertise 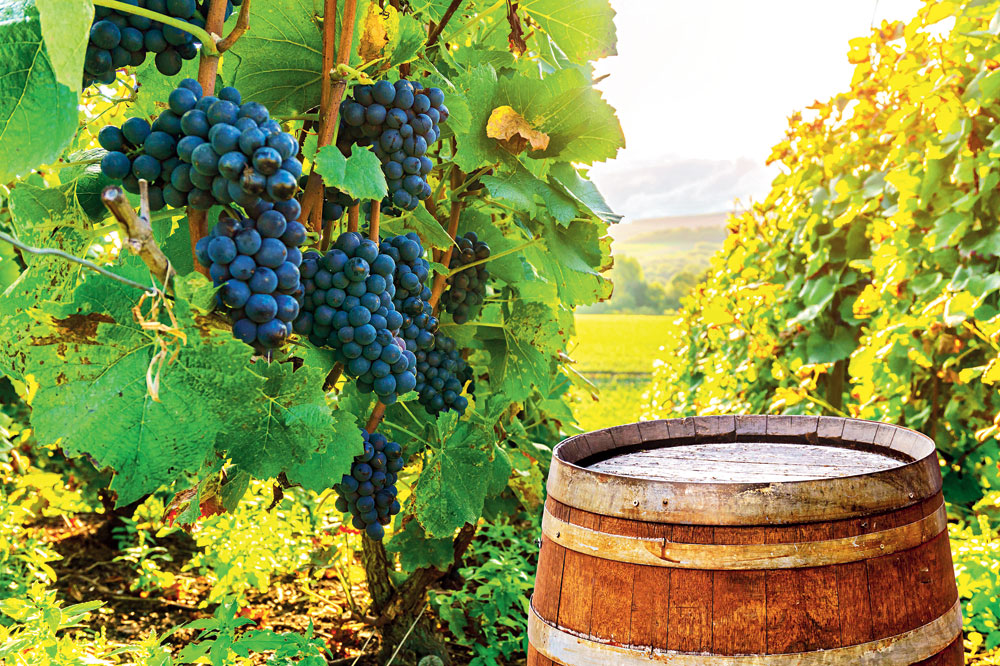 Legend has it that champagne was invented in 1693 by a Benedictine monk at the Abbey of Hautvillers near the town of Epernay. His name was Dom Perignon
Sourced by the Telegraph
Karen Anand   |     |   Published 20.10.18, 03:21 PM

Even though it is made from the fermented juice of the noble Burgundy grapes, Pinot Noir (just the juice of this red grape is used) and Chardonnay with a little of the juice of the more ordinary red grape Pinot Meunier, many people do not even think of it as a wine. Much of the romance is built on the notoriety of Champagne. From its very beginnings in the court and high society of 18th century Versailles and Paris, champagne was the drink of celebration and seduction. Freed from the sobering restraint of Louis XIV with his death in 1715, the high-living aristocracy under the regent Philippe II, Duc d’Orleans, set out on a decade of carefree debauchery while they waited for the child king Louis XV to assume his full royal powers. In this notorious court of licentiousness and promiscuity, where food and sex held centre stage, champagne was an accompaniment to all. In a short time, champagne seduced Paris beyond the court and the rest of the courts of Europe as well.

Wherever matters of taste and style were being set, there you would find a salesman of Champagne... the owners of the champagne houses themselves. These early shippers were the most dashing and extravagant tradesmen of their day. They travelled through Western Europe, Russia and America, always in grand style, convincing the world that no festivity was worthy of the name without the popping of corks. Among the adventures of the Heidsieck family, there are those of Charles-Henri, who travelled to Moscow and beyond on a white stallion and impressed his hosts enough to pick up the business of the Tsar.

Recently, I found myself spending an effervescent couple of days in champagne country. It’s always a treat to be pampered but tasting the world’s most-coveted bubbly in its home territory, was a privilege beyond belief.

I am in Champagne, which is under an hour by train to the east of Paris, to visit three main champagne houses — the well-known global name Piper-Heidsieck, Billecart-Salmon, whose rose champagne I adore, and a small boutique house owned and run by a woman winemaker and named after her father, Michel Gonet. These are the vineyards of the world’s best-known wine name — Champagne.

I start my day early at Piper-Heidsieck. Their story is romantic but their success is more phenomenal. Florens-Louis Heidsieck from Germany created his first vintage in 1785 for the love of his life, Agathe Perthois. When he founded the company Heidsieck & Cie in 1785, his dream was to bedazzle Marie Antoinette and he succeeded. Marie Antoinette became in effect the first Heidsieck ambassador.

Since 1993, Piper-Heidsieck has been the official supplier at film festivals like Cannes, Deauville, Berlin, Boston, Chicago, San Francisco and, of course, the Oscars. They also have a Piper-Heidsieck Award, which has recognised Al Pacino, Francis Ford Coppola and John Cusack. We try several champagnes — their signature cuvee Brut, which I recognise from the familiar red-and-gold label on the bottle. We then move on to Essentiel, aged for four years with lovely fresh almond and white peach notes. I fall in love.

Then its Rare, covered in a filigree gold lace crown… very special packaging for an exceptional vintage bubby. We continue with more vintages and styles over an exquisite lunch of lobster salad and lamb. I leave PH mesmerised by the quality of champagnes and the experience of one of the oldest houses in the region. I am reminded of the famous Marilyn Monroe quote: “I go to bed with a few drops of Chanel No. 5 and I wake up each morning to a glass of Piper-Heidsieck; it warms my body up.”

One of my favourite accessible rose champagnes is from the house of Billecart-Salmon. A union between Nicolas Francois Billecart and Elisabeth Salmon who, in 1818, just married, began Champagne House in Mareuil-sur-Ay. Today, the sixth generation of the family, Francois and Antoine Roland-Billecart, with the support of their father Jean Roland-Billecart, still head the House. Produced by the House since 1840, the Brut Rose made the Billecart-Salmon name famous worldwide.

The best vineyards of Champagne begin just south of Reims and follow the slope around to Epernay. Driving from one village to the next on the small, tractor-sized roads, we pass through Sillery, Mailly, Verzenay, Bouzy and Ay (pronounced Ah-ee), arriving finally at Epernay, Champagne’s other main city. Reims is a big town with an important cathedral. Epernay is a sleepy village with one long impressive road running through the centre called the Avenue de Champagne, with endless kilometres of cellars of very famous brands.

Like any wine, sparkling or still, champagne owes its unique character to the subtle interplay between micro-climate, soil, grape variety and the expertise and care of the winemaker. Three predominant characteristics of the Champagne region are: the harsh climate with great variation of temperature in winter and summer, the limestone subsoil and the hilly terrain ideal for grape-growing. Champagne was the first region to produce sparkling wine, although today Champagne is responsible for only one in every 12 or 13 bottles of the world population of sparkling. The Champenois vineyard, which is the first to have received an A.O.C. (Appellation of controlled origin) label in 1908, covers 85,000 acres today.

Why does champagne pop? In the cold winters of the region of northern France, wines had a tendency to stop fermenting after the harvest in autumn and started re-fermenting in spring resulting in a release of CO2, which would “pop” the cork out of the bottles. This was considered a nuisance and sparkling wine was, for many years, considered inferior to still. Much work was done on the bottles, improvement of corks, riddling or ‘remuage’ and addition of an exact amount of sugar to make sure the second fermentation in the bottle did not cause an explosion.

There are two ways of making rose champagne I learn — assemblage, where mainly white wine is simply blended with a smaller amount of red (usually Pinot Noir) and Saignee, where the red grape skins and juice are allowed to macerate till the desired colour is achieved, whether it’s just a blush or something more intense. Billecart Salmon uses the assemblage method which allows them to produce a standardised international product in quantity. In 1999, the 1959 vintage Billecart-Salmon was voted Champagne of the Millennium by a jury of experts during a blind tasting in Stockholm from among 150 vintages of the greatest champagne houses, organised by Richard Juhlin.

We then drive to Epernay to meet Sophie Signolee nee Gonet. She is a woman obsessed with purity and doing things the traditional way without compromise. Her father, Michel Gonet, started the champagne house with vineyards and a house outside Epernay and has recently acquired a mansion on the famous Avenue de Champagne. He now divides his time between Champagne and his vineyards in Bordeaux. His main objective is to produce champagnes from the white grape chardonnay, only producing racy and environment-friendly blanc de blancs.

They have 36 hectares of their own vineyards, mainly in the Cote des Blancs area, a part of which is classified Grand Cru. During the course of the evening, over dinner with Sophie, I learn to appreciate the more careful and feminine style of her very special champagnes which has both finesse and freshness.

Records show that in 2016, 85,000 acres of land in Champagne produced 268 million champagne bottles of bubbly valued at Euro 4.7 billion. The US and the UK proved to be the top destinations of the champagnes, while Japan and Australia from the Asia Pacific region were not too far behind. This shows that despite all the other sparkling produced all over the world, there is still something very special about a bottle of champagne that goes far beyond its fizz. 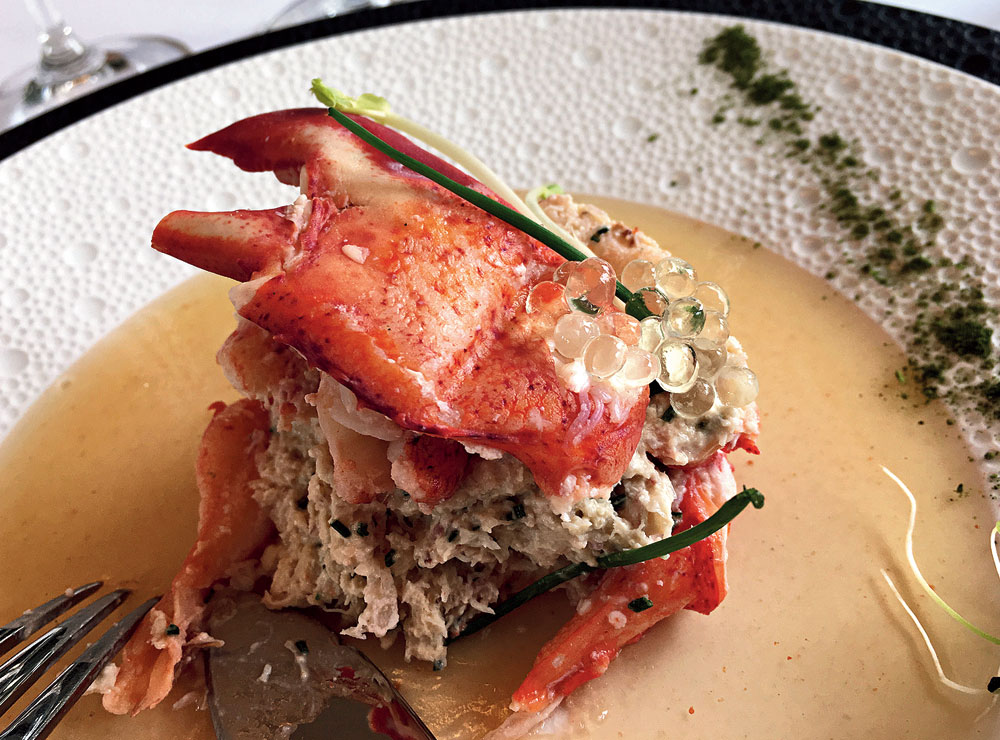 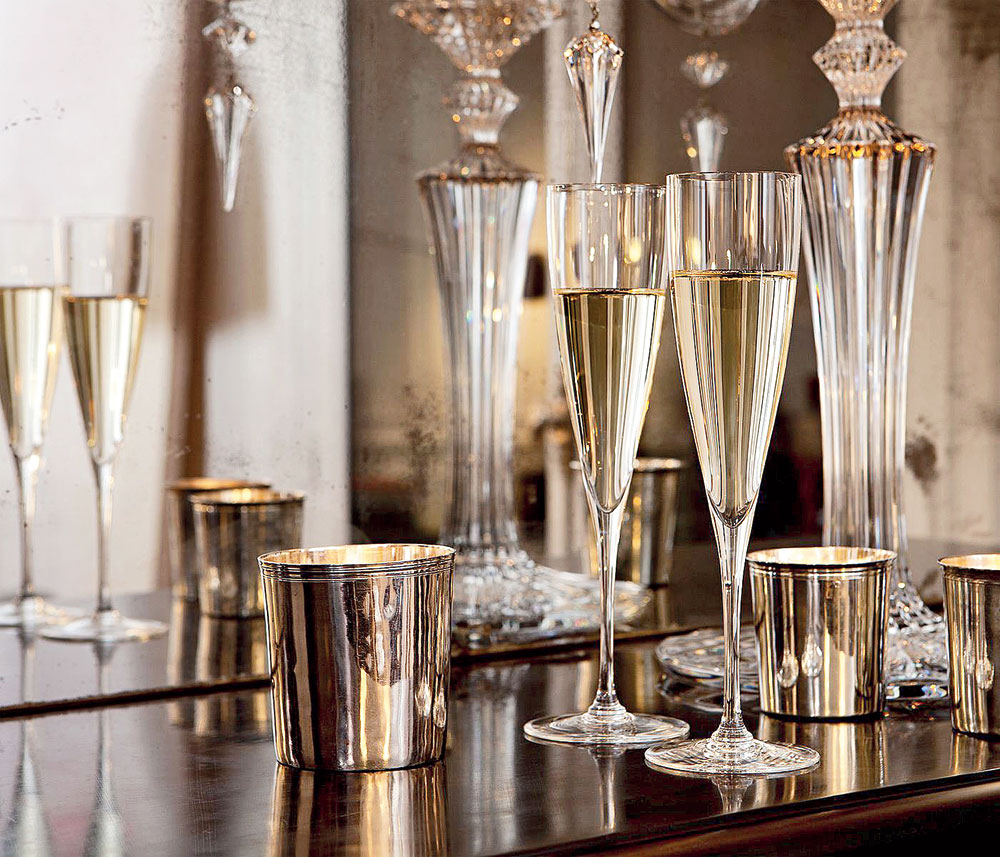 A champagne flute
Sourced by the Telegraph 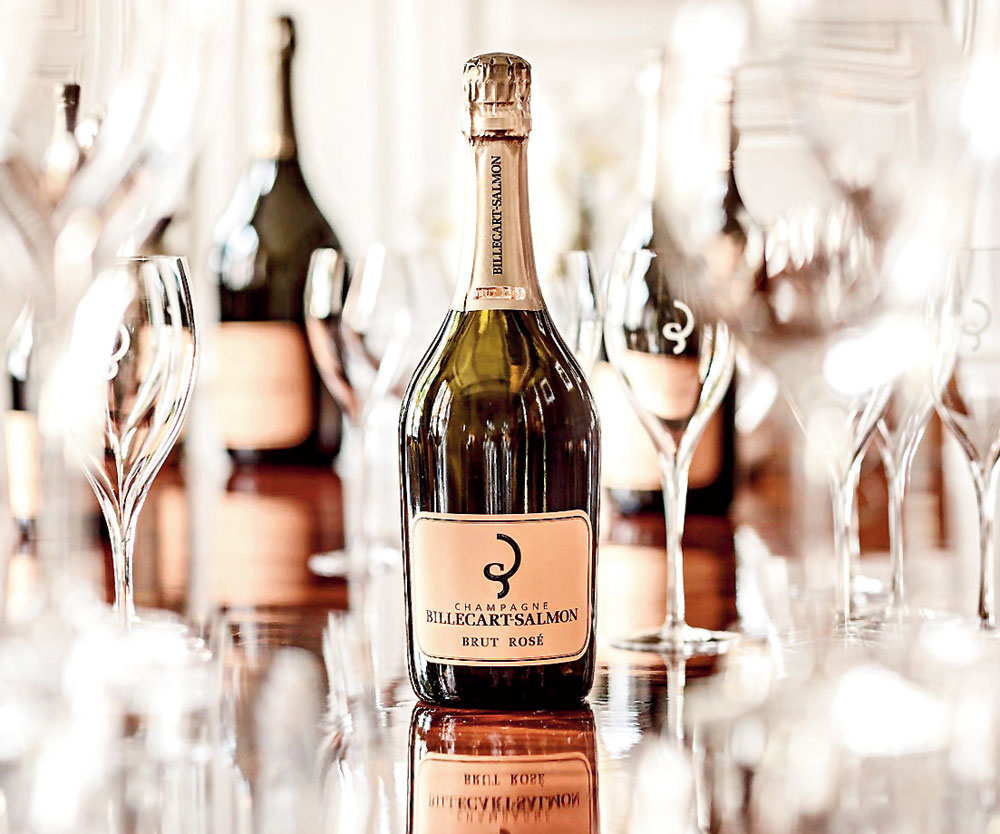 A bottle of Billecart-Salmon
Sourced by the Telegraph 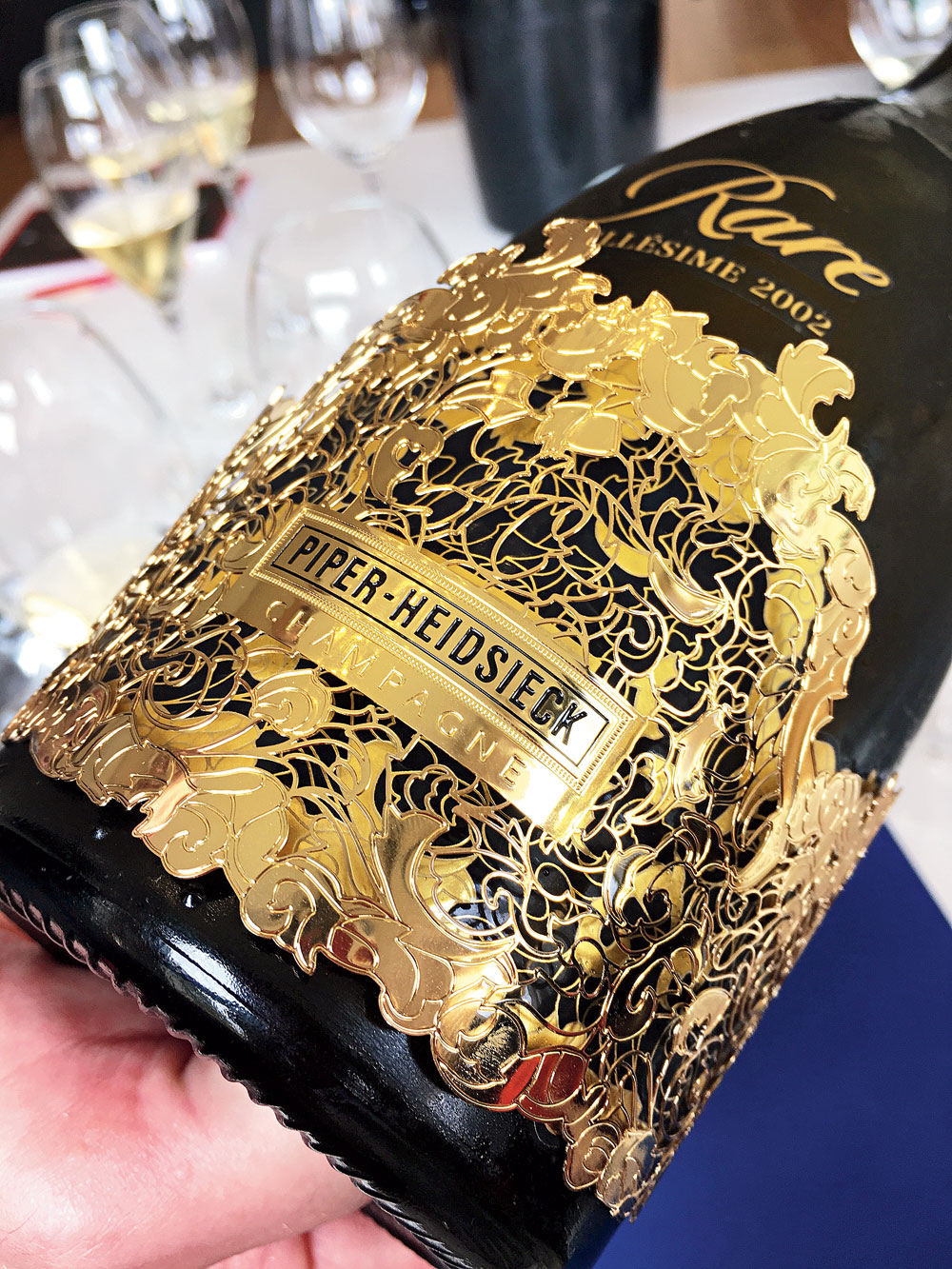 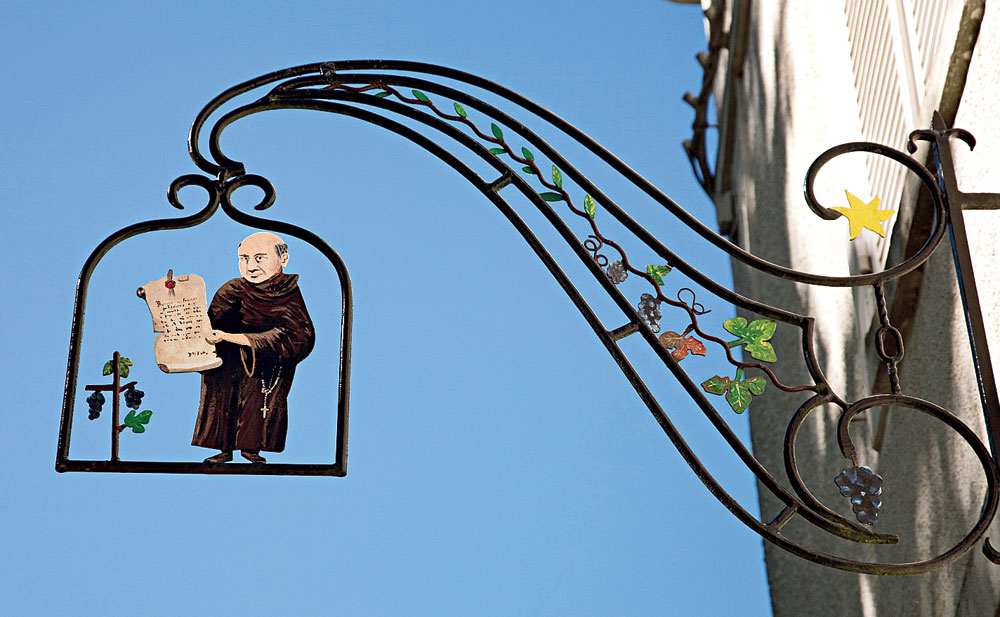 A Benedictine sign in Hautvillers
Sourced by the Telegraph 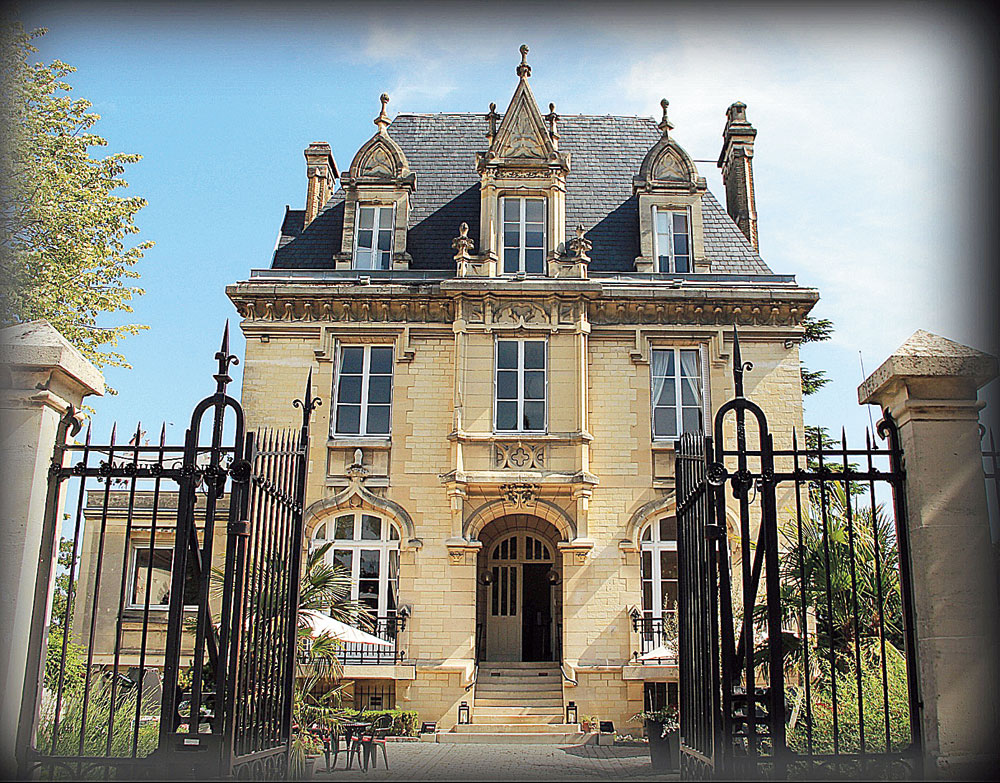 Karen Anand is a culinary consultant, food writer and entrepreneur. In recent times her name has been synonymous with farmers’ markets. Follow her on `www.facebook.com/karenanand`

The three grape varieties used in champagne are also key — Pinot Noir, a red grape for structure and depth of fruit, Chardonnay, which imparts an elegance and finesse and gives champagne its distinct buttery, floral notes and capacity to age, and Pinot Meunier for fruitiness.

Legend has it that champagne invented in 1693 by a Benedictine monk at the Abbey of Hautvillers near the town of Epernay. His name was Dom Perignon. The precise extent of his contribution is fuzzy but he did establish a rational method to both blending and was among the first to cork the bottles properly.

The other “legend” is about the famous champagne glass or “coupe”. People say that the saucer or coupe glass was moulded from Marie Antoinette’s left breast, and that she wanted her court to toast her health by drinking from glasses shaped like her bosom.

However, the truth is the glass was actually invented long before the reign of the queen. History does show that in fact, Marie Antoinette had porcelain bowls moulded from her breast. They were designed for drinking milk as part of her “Pleasure Dairy” where the queen and her ladies-in-waiting would dress up as milkmaids and frolic, milking and churning butter all day in her rustically designed hamlet at Versailles. Maybe the stories became crossed somewhere in history.

In 2008, the company Dom Perignon revealed a glass designed after model Claudia Schiffer’s bosom! Although its petite size and rounded design is perfect for holding a drink, it was never the right glass for sparkling wine — the bubbles dissipate much too quickly with all that surface area, risking the champagne going flat. After the coupe, came the tall elegant glass called the flute. That lasted quite a while till sommeliers realised that while the classic, narrow flute offers a beautiful display of effervescence, it can inhibit the ability to explore the depth of aroma and flavour in the wine. The tulip, which has a fuller bowl or centre, took over. Simply speaking, the white wine glass. This is the glass that all champagne houses use today. Some have created their own versions with glass manufacturers like Riedel but they are all based on the tulip.