Shaun Kenworthy helps you out in his column ‘Chocolate, Chillies & other Culinary vulgarities’ 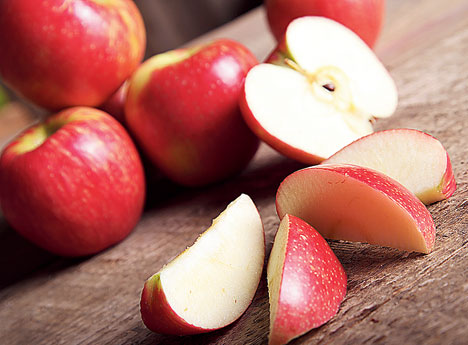 Hello chef, I want to take up culinary arts in  future. My question to you is: What made you come up with the title ‘Chocolate, Chillies and other Culinary Vulgarities’? Why did you classify other ingredients as “vulgarities”?
Srija, Calcutta

When you travel around the world, you will see so many food cultures where something or the other could be looked upon as disgusting or vulgar. So in many ways all foods are. Till today in many parts of the world, people have no concept of spices or chillies in food and would find them utterly vulgar. The idea of eating raw and sometimes any meat is unimaginable and the whole beautiful world of animal offal or innards would make most people throw up at just the idea of it. The Inuit relish eating raw sea lion blubber, heart, liver, kidneys. Hence, “Chocolate, Chillies & Other Culinary Vulgarities”.

How do I prevent apple slices from blackening, especially if I have to keep them ready for a party?
Rhonda, Calcutta

I am sure some bright spark has come up with a lengthy, intricate way, using a variety of chemicals, vacuum packaging, chilling and rechilling system by now, but I suggest dipping them into lemon juice and water as I did when I was growing up.

Mashed potato often turns out to be elastic. Is there a way to prevent that?
Pari, Calcutta

YES! You are using the wrong potato! You need to use the nice, big, ugly-looking old ones which are white and not yellowy. I love cooking them in a little milk with the lid on so they almost get steamed. Then just throw in a good dollop of butter, salt and pepper and mash away.

How do you cook prawns just right?
Shubhojit, Calcutta

I tell all of my students that cooking is all about common sense. A prawn in all reality, either grilling, frying, steaming or slipping it into a bubbling curry, takes literally a few minutes to cook. So trial and error is something that all cooks have to go through.

How to pan-sear chicken without making it dry and rubbery?
Bunty, Delhi

To start with, I am guessing you are talking about chicken breasts, as legs usually have enough fat to keep them moist. For me the best way to cook a chicken breast is to first ask the butcher to give it to you with the skin on. I would suggest this for legs and thighs too as fat from the skin will render and add moisture. Secondly, because that chicken has just been flapping around in a bucket, wash them once you get home and keep them covered in the refrigerator for two or three days. This will give the muscle time to relax. Then when you want to cook it, heat some oil in a pan, season the chicken with salt and pepper and cook skin side down for three to five minutes until the skin is crisp and golden. Most of the cooking will be done on the skin side. If it’s a 150g breast, cook it on the flesh side for a further two minutes. At this point it shouldn’t be cooked through fully but if you let it rest, covered in between two plates, because of the residual heat, it will continue to cook and finally be fully cooked and deliciously moist and juicy.

I tried making meringues but after sometime they went flat. How can this be prevented?
Aradhya, Bangalore

You need to cook them before they go flat, my lovely! Here’s my foolproof recipe for dry, crispy meringues:
Preheat your oven to about 90-degrees celsius. Into a squeaky clean bowl, start to whisk 100ml egg whites and make sure there is not even a speck of yolk or it just won’t whisk. Do this by hand or with some source of electric contraption, that’s up to you. Once it starts to foam, add 200g sugar, a little at a time and continue whisking.
After around five minutes of whisking, you will have a lovely, shiny and firm meringue. Colour, and lightly fold in pretty much whatever you want to and either pipe or pile into small blobs or rounds or wiggles. Feel free to have fun on a piece of grease-proof paper and bake until fully dry for three hours. Keep the oven door slightly open, using a wooden spoon. Check once it’s completely cool. Store in airtight containers for up to a month.

Yes of course. If you are using extra virgin olive oil, try to use the lightest, olive oil / olive oil light and olive oil pomace for frying / tempering.

I usually make kebabs in OTG, but they tend to get rubbery. For how long should the kebabs be ideally grilled?
Madhurima, Calcutta

Read my answer to the question where I have said how to cook chicken and keep it moist. But if that doesn’t help, grab your smart phone, find a food delivery app and find the best kebabwallah in town. He’ll do a much better job than you could ever imagine!

Chef Shaun, can you help me with a couple of quick, easy, healthy yet tasty recipes to take to work, something western if possible?
Ruhi, Calcutta

Labneh with chilli, pomegranate and mint: Line a sieve with a layer of muslin cloth and place over a bowl. In another bowl stir together 500g fresh yogurt / curd, a good pinch of salt and then put it into the muslin cloth, tie up the ends and leave to drain in the fridge for around 24 hours. Give the labneh a good beating in a bowl with a spoon so it’s smooth but firm. Check to make sure there’s enough salt. Spoon it into a bowl, sprinkle some pomegranate seeds and freshly-picked mint leaves and drizzle over a little extra virgin olive oil. Serve with crisp breads or crackers and some assorted vegetable crudities.

Greek quesadilla (great hot or cold): You can either use commercially made tortillas but for a home-made healthy option, make them out of roti dough and roll as you would for thin, half-cooked chapattis. Slice and chargrill some assorted red,  green and yellow peppers, toss them into a bowl with a little olive oil. Season with salt and freshly ground black pepper.
Heat a griddle pan until smoking, add the pepper and fry for three to four minutes, or until tender and charred on all sides. Remove from the pan. Wipe out that same pan, pour in a little oil and start stacking your quesadilla. Start with a layer of tortilla or chapatti and make sandwiches out of two at a time with the roasted peppers, sliced tomatoes, a few chunks of feta cheese, sliced olives and fresh basil leaves.
Fry on both sides until golden brown. They are delicious!