'You are putting up dishes to be critiqued and judged and it’s a very scary thing to do, especially when you love cooking so much', says the chef 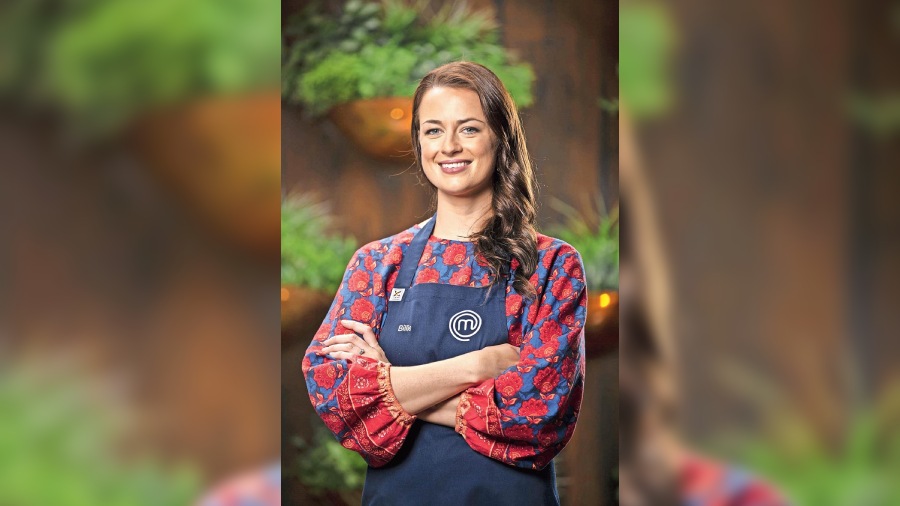 I think I lucked out pretty early in Season 7 and despite the pressure, I tried my best to remain calm, and that helped me through every challenge. I took one day at a time. Luck sure plays a part because you have to pick an apron out of a bag and depending on what you get, it can either make your day or break your day. You don’t know what’s going to happen in that kitchen. So keeping calm is what helped me get through it
Priyanka Roy    |   Published 28.07.22, 12:52 AM

Billie McKay has managed the unique feat of winning the MasterChef Australia trophy twice. After coming out on top in Season 7, Billie — who has scores of fans in Australia and in India — aced the 14th season of the much-loved culinary competition recently, which saw her beating a mix of returning contestants and new contenders. She became the first ever contestant in the history of the show, streaming on Disney+Hotstar, to do so. The Telegraph caught up with Billie for a long-distance chat on her massive achievement, her time on the show and her food dream.

You have managed the unique feat of winning MasterChef Australia twice, something that no one else has. Has the feeling completely sunk in yet or does it still feel surreal?

I think it is still sinking in. The last six months on the show have been a massive whirlwind! (Laughs) Even now, I sometimes pinch myself that I won the first time around and so it may take a while for this one to sink in too.

Do you realise the enormity of what you have achieved?

Yeah I think so. And talking to more and more people about it after the win makes me realise every day that this hasn’t been done before. It does feel surreal, but I am aware of how big it is. I never ever thought I would be able to win MasterChef Australia twice. First, I never thought I would have the opportunity to come back and try again. Yeah, it’s such a feat.

Going back to MasterChef Australia must have brought on a whole wave of nostalgia. What were your reasons to go back and what are the emotions you felt once you walked in through those familiar doors?

Yes, nostalgia is a big one. The kitchen was the same, the setup was more or less the same, and so I felt at home in a way. But I think one can’t get past the fear of what walking in through those doors mean. You are putting up dishes to be critiqued and judged and it’s a very scary thing to do, especially when you love cooking so much. You just want the judges to consistently love your food. So yes, there was a lot of fear involved. But for contestants who have done it before, it made it a little easier. We knew what to expect in a way. It made it slightly less terrifying this time around (laughs).

How did participating in the show and winning it the first time influence and impact you as a person and a chef and how has the same experience this time around enriched you on both counts?

Julie Goodwin (who won Season 1 of MasterChef Australia) and Sashi (Cheliah, the winner of Season 10) and I were in the same boat because we were all coming back as previous winners. There was a lot of pressure to perform well. A lot of the contestants would keep talking about how they wanted to beat their previous positions (in earlier seasons). Alvin (Quah) was trying to beat coming sixth and Sarah (Todd) was looking to better her ninth position. For us, it was counting down to the number one spot which brought on a lot of pressure.

But winning the show has been life-changing for me both times. After the first time, I went to The Fat Duck (owned by Heston Blumenthal) to work and it’s an experience that not many people get. That was really amazing.

Given that you have won twice, it’s imperative to ask whether there is a method to the madness of cracking this?

Oh my God! (laughs) I am not sure, I am not sure. But I think I lucked out pretty early in Season 7 and despite the pressure, I tried my best to remain calm, and that helped me through every challenge. I took one day at a time. Luck sure plays a part because you have to pick an apron out of a bag and depending on what you get, it can either make your day or break your day. You don’t know what’s going to happen in that kitchen. So keeping calm is what helped me get through it.

Apart from the winning moments in each season, which has been your best memory of the series in 2015 and in 2022?

There is a certain growth and knowledge in being on MasterChef Australia. You are in a place where everyone is constantly talking about food. The contestants, the judges and even the crew on the show are all so interested in food. So one gets to learn something new every single day. That’s something I took out of both seasons. In this season, aside from winning, the friendships that I have made have been really, really special.

Who do you idolise in the world of food?

Gosh, there are a few! But Maggie Beer (Australian chef, food author, restaurateur, and food manufacturer) is someone I have always loved mostly for her presence, she’s so lively and also has a big smile on all the time. She’s a woman who has been through a whole lot in her life but she’s found so much joy in food and in simple kind of cooking. Looking at her, one feels inspired to think that you can cook simple, tasty food and still be happy about it. She is someone I look up to.

Are you aware of how popular MasterChef Australia is in India?

I was pretty naive when I was on the show the first time and I didn’t even know that it was shown in countries outside of Australia! (Laughs) When I learnt how huge it is in India, I just couldn’t believe it. It’s pretty special. It’s been very eye opening. It just goes to show how well the MasterChef Australia format works. It is a very genuine show... it’s friendly, informal and I think what resonates about the show across the world is its nice nature.

You visited India a couple of years ago. Did you have enough time and experience to form an opinion of the food scene here?

Not really. It was quite a few years ago. I was doing a tour with ITC hotels and were on a pretty tight schedule. I didn’t get a whole lot of time to experience the real food of India. That was a shame, but the trip definitely got me excited and I would love to go back and visit and probably have a little family holiday.

It’s still the same as it was earlier. After the first win, I wasn’t ready to do it yet because I wasn’t exactly sure if that’s the path I wanted to go down. But having won MasterChef again shows me that food is where I really belong. I would like to open a little restaurant that showcases my favourite styles of cooking. I don’t have just one style, it’s quite varied and I want to put in a little bit of everything. So ya, a little restaurant close to where I live would be nice.

Billie at work in Season 14 of MasterChef Australia
QUICK FIVE

Comfort food: Desserts! Warm, cakey, saucy desserts. Especially at this time of the year in Australia. I would love a sticky date pudding or a chocolate pudding in the cold.

A dish you can eat the whole year round: I can’t ever have enough seafood! I live in the mid-north coast of New South Wales, in between Sydney and Brisbane, and we have beautiful prawns and all types of fish.

Toughest cuisine to cook: I think Indian. It’s such a skill to be able to balance spices and I admire someone like Sarah (Todd, who was runner-up this season) who cooks Indian and Indian-inspired food so well. I have been doing some Indian cooking lately and trying to hone my skills. I have been doing a few seafood curries, some Goan recipes.

Favourite book on food: Stephanie Alexander’s The Cook’s Companion is a book I have had since childhood. It’s a massive book with chapters on ingredients, simple recipes to difficult ones. I always find something in there when I am lacking inspiration.

Favourite TV show/ film on food: Growing up, it was definitely Maggie Beer’s The Cook and the Chef. Right now, it’s Chef’s Table. With the streaming services going strong, there are so many food shows out there.