The book was formally launched in Kolkata in the presence of Usha Uthup, Ritabhari Chakraborty and her brother, Palash Sen 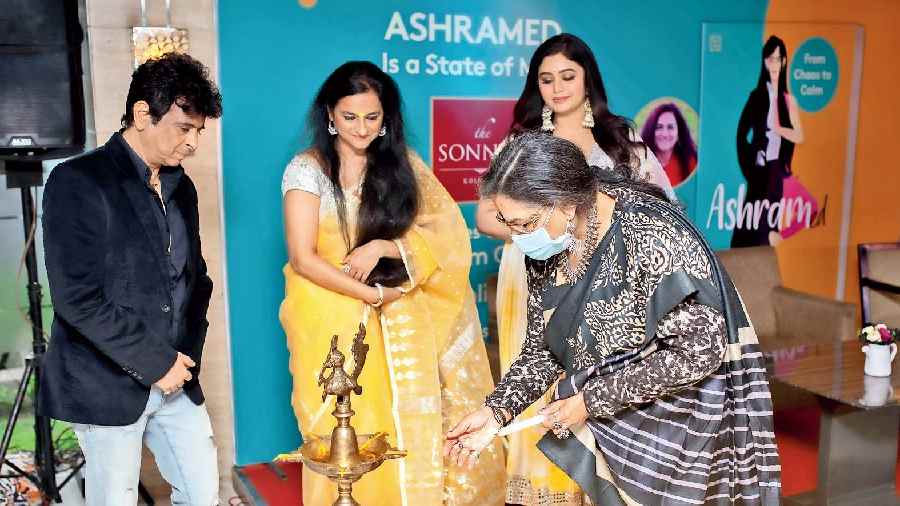 Delhi-based lawyer Dahlia Sen Oberoi’s life revolved around court appearances, client meetings and travelling the globe for work, at the same time squeezing in time to be with her family. Like all professionals she struggled to strike a work-life balance. However, an impulsive decision to join a yoga teacher’s training course offered by an ashram changed her life forever. Ashramed: From Chaos to Calm, Sen-Oberoi’s debut book, is a profound, humorous and delightfully candid account of her 30-day stay at the ashram and how it transformed her as a person.

Dahlia Sen Oberoi read excerpts from her book during a post-launch conversation with her special guests. “Finishing this book and seeing it published is a dream come true for me. Written in simple, straight-from-the-heart words, it is my way of sharing an incredible and insightful personal experience so that others may also benefit from it,” she said.

Published by Hachette India, the book was released all over the country last month with a special event in the capital in the presence of Delhi chief minister Arvind Kejriwal. Also available in e-book version and on Amazon and other platforms under the ‘Mind Body Spirit’ genre, it has already generated favourable reviews by readers and fellow authors alike.

The book was formally launched in Calcutta earlier this month at The Sonnet, Salt Lake. It was followed by a lively, stimulating conversation on the book. The special guests included Usha Uthup, Ritabhari Chakraborty and Dahlia’s brother, Euphoria frontman Palash Sen.

“My time at the ashram was a reality check for me. It was also a turning point in my life. I was burnt out and exhausted from having led a hectic work life for close to three decades. But I was not ready to admit it. My fortuitous decision to take a break from routine offered me an opportunity to pause and reflect within myself. It brought about my moment of epiphany and made me realise where I figure in the larger scheme of things. I realised that it is important to take breaks in order to reconnect with oneself and work on one’s own well-being. I also discovered that it takes a lot of courage to do it! To me, the experience was so magical that it seemed selfish not to share it with others,” said the energetic, intellectual property rights lawyer-turned-author.

Glimpses from the launch.