MUSIC: With the dance-worthy number, 'Menoka mathaye dilo ghomta', she evoked a sense of unrequited longing 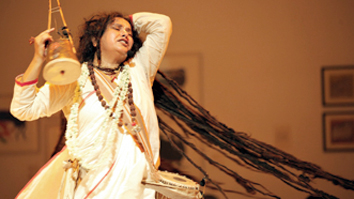 With a voice that can sound like a war cry and yet has the depth of an abyss, Parvathy Baul conjured a range of emotions at a recent concert organized by Emami Art. She began with the groovy, but powerful, “Aaye ke jabi chol sajani”, with her deft ektara accelerating the song forward. Parvathy often repeats bits till she is convinced that the message has been delivered. Hoping to break down social hierarchy and achieve a fairer and more empathetic world, she delivered “Sansare ghireche amaaye sansare” in her inimitable style. She dropped her voice down to a deep and sorrowful level, only to hit the smooth high notes the next moment, making her rendition catchy.

With the dance-worthy number, “Menoka mathaye dilo ghomta”, she evoked a sense of unrequited longing. As stunning as ever, she sang this song keeping the conventional patterns spare and looped floating notes and arrangements to create a rich and detailed piece of work. Two other songs that were liberating and bold were “Aami bhuli bhuli” and “Durga durgatinashini” — they conveyed a powerful statement with genuine feeling.