The 75th Independence Day of India inspired concerts across the country 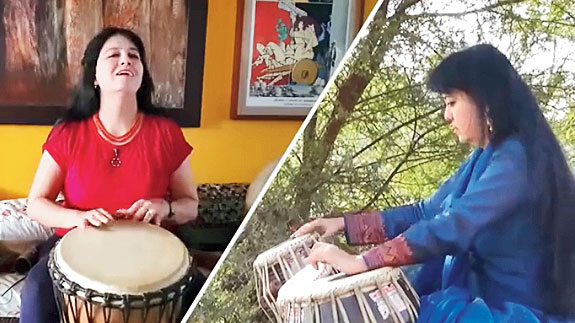 The 75th Independence Day of India inspired concerts across the country. One of these events featured the percussionist, Anuradha Paul, who made an interesting connection between the occasion of Independence Day and the monsoons. The programme, Dancing Rain, was a combination of Indian classical vocals with jazz and orchestral instrumentals, spiced up with multi-layered percussion. It commenced with a rendition of “Vande mataram”; Paul then went on to portray the drama and nostalgia of the monsoons. The beauty and diversity of India were portrayed exquisitely through music, dance, spirituality and culture. Paul used almost 12 variations of percussion instruments from India, West Africa, Latin America and East Asia, coordinating with jazz musicians from India and abroad.

Although the most popular of the monsoon ragas, Miyan ki Malhar, formed the base of the entire show, the mood was enhanced by the essence of other ragas like Desh. Accompanying artists like Sandeep Ranade on vocals, Mita Nag on the sitar, Farooq Latif Khan on the sarengi, Keyboard Sathya on the keyboard, Krishna Ballesh on the shehnai, Sai Giridhar on the mridangam, Shikhamaad Qureshi on the cajon and banjo, Keith Peters on bass and Phil Scarff on the saxophone were rhythmic and tuneful too. Shovna Narayan and Saswati Sen deserve special mention for the dance snippets.

Another musical celebration of Independence Day was organized by Shrutibritto, wherein one witnessed the full version of “Jana Gana Mana”. The presentation was compiled under the supervision of Shubhadeep and Chirantan using vocals, narration and dance. Usha Uthup, Anupam Roy, Iman Chakraborty, Riddhi Banerjee, Indrani Sen, Rupankar Bagchi and several others were part of the compilation through musical excerpts. Satinath Mukhopadhyay, Pranati Thakur and Shovansundar Basu, among others, performed the narration. The programme was further enriched by the participation of Thankamani Kutti, Tanusree Shankar, Dona Ganguly and other renowned dancers. The unequivocal message that was sent out was that of unity in diversity. Arunabha Khashnabis was in charge of visuals and editing, while S. Gopal was responsible for sound and mixing. The show was a part of the Azadi Ka Amrit Mahotsav, an endeavour of the Union ministry of culture.

Banyan Tree presented Barkha Ritu in Bangalore, which showcased violin and slide guitar performances by R. Kumaresh and Debashish Bhattacharya as well as a vocal recital by Venkatesh Kumar. Bhattacharya played Jaijaiwanti, while Kumaresh chose to contrast it with Raga Sahana. They were well-coordinated and the audience enjoyed their rendition. This was followed by Raga Megh by Bhattacharya and Madhyamavati by Kumaresh. The monsoon ragas set the right mood for the season, which was augmented by Jaychandra Rao on the mridangam. The ambience was given a further boost by the generous voice of Venkatesh Kumar with Keshav Joshi on the tabla and Satish Koily on the harmonium.