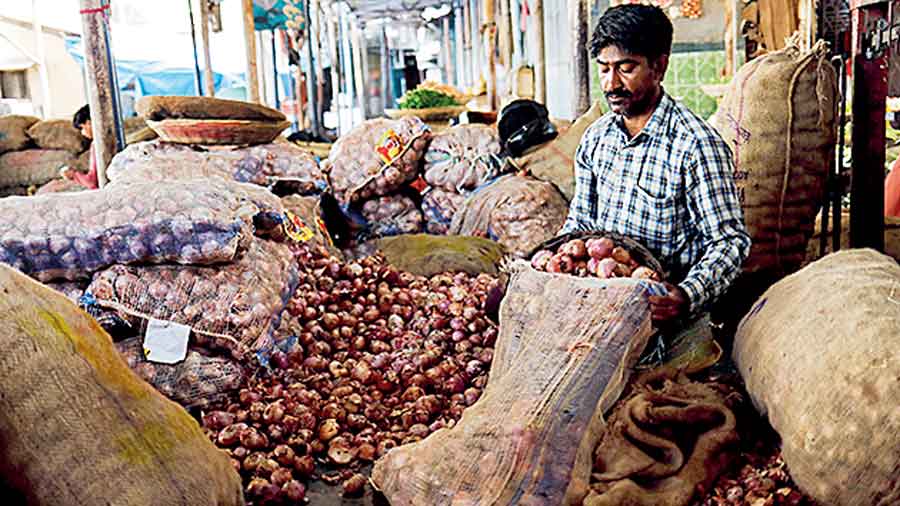 Wholesale price inflation in December stayed in double digits for the ninth consecutive month at 13.56 per cent — with food prices soaring to a 23-month high of 9.56 per cent.

Analysts said the Reserve Bank was unlikely to tinker with its rates at its February meeting to keep prices in check as the monetary policy committee will be swayed more by the growth concerns in the wake of the third wave.

The wholesale price-based inflation (WPI) bucked the 4-month rising trend in December. WPI inflation has remained in double digits for the ninth consecutive month beginning April. Inflation in November was 14.23 per cent, while in December 2020 it was 1.95 per cent.

Inflation in food articles spiked to 9.56 per cent in December against 4.88 per cent in November. The vegetable price rise rate jumped to 31.56 per cent, against 3.91 per cent in the previous month.

In the food articles category, pulses, wheat, cereals and paddy all witnessed a month-on-month price rise, while potato, onion, fruits and egg, meat and fish saw some softening. Inflation in manufactured items was lower at 10.62 per cent in December, against 11.92 per cent in the previous month.

Sunil Kumar Sinha, principal economist, India Ratings and Research said “The moderation came on the back of softening in inflation of manufacturing and fuel and power. Nevertheless, it is the ninth consecutive month of double-digit inflation and at 13.56 per cent, it is still the third highest wholesale inflation recorded in the 2011-12 series. The primary articles inflation at 13.38 per cent in December 2021 is a 12-year high.”

“Notwithstanding the continued double-digit WPI inflation in December 2021, we expect the MPC to pause in February 2022. The duration of the current wave and the severity of restrictions will determine whether policy normalisation (change in stance to neutral along with a hike in reverse repo rate) can commence in April 2022, or be delayed further to June 2022.

“Once normalisation commences, we subsequently expect two repo rate hikes of 25 bps each, followed by a pause to reassess the durability of growth,” Nayar said.

The Reserve Bank of India is slated to announce its monetary policy on February 9.

“WPI inflation for December came in lower but is not really a comfort as it is still high and will continue to be so for the rest of this fiscal. WPI inflation is not too relevant from the point of view of monetary policy but will be a concern for the government when formulating the Budget as these prices and their future trajectory will be a part of all projections,” Bank of Baroda economists said in a research note.

The Reserve Bank of India (RBI) is slated to announce its monetary policy on February 9.