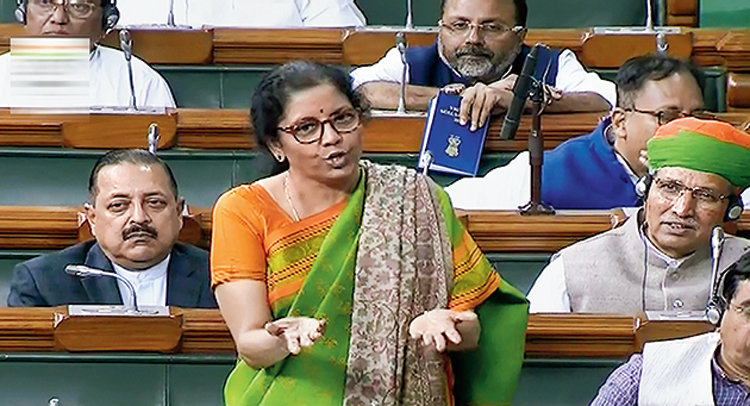 The Modi government on Wednesday introduced a direct tax dispute settlement bill which seeks to provide resolution of cases involving Rs 9.32 lakh crore and free up courts and tribunals crippled by prolonged litigation.

The scheme, she said, will not be an open-ended one and can be taken for a limited time.

The vivad se vishwas scheme is similar to the Indirect Tax Sabka Vishwas scheme, which was introduced by Sitharaman during her maiden budget presentation in July 2019.

The bill has proposed two sets of settlements. The scheme offers a chance to pay disputed tax arrears without interest and penalty if paid before March 31. If paid later, but before a due date to be announced later, the amount will go up 10 per cent.

Sandeep Bhalla, partner, Dhruva Advisors LLP, said: “The scheme is a welcome step in line with the present government’s resolve to settle disputes and unclog the system. In indirect taxes, the government has collected up to Rs 40,000 crore largely as the scheme proposed only 50 per cent of tax payment with complete waiver of interest and penalty.

“In the direct taxes scheme, the tax payment is 100 per cent though there is waiver of interest and penalty.”

“The scheme offers a fair deal to settle pending tax disputes and the people should come forward and avail the plan. At present, there are 4.83 lakh direct tax cases pending in various appellate forums. But I think the window for availing the scheme should have been more,” said tax advocate Narayan Jain.

However, these proposed settlements will not be applicable to cases arising out of undisclosed income from sources outside India or if the assessment was made under Section 153A or 153C of the Income Tax Act, or if prosecution was initiated before filing of declaration by the declarant, or if the assessment was made based on information received under an agreement referred in Section 90 or 90A of the income tax act.

Meanwhile, the CBDT has set the ball rolling to implement the scheme by asking its offices across the country to provide it with data on pending appeals in high courts.

The department has written to all principal chief commissioners asking them to collate the data and send it by next week.