The Indian oil companies gave no reason for the sudden price cut, which comes just three days before five states, including Bengal, go to the polls 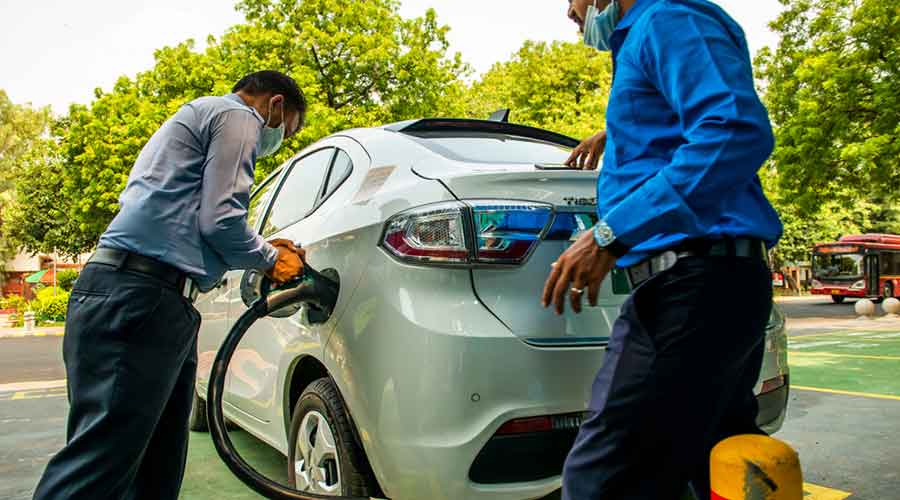 State-owned oil marketing companies sprang a big surprise by cutting petrol and diesel prices for the first time in the past 12 months — ironically on a day when global benchmark crude prices soared by over 5 per cent after a bizarre incident in which a Panama-flagged container ship became wedged across the Suez canal disrupting all shipping traffic through the famed waterway. The Suez canal has never witnessed such an incident in its 150-year history, experts said.

The Indian oil companies, which have held prices for the past 24 days after relentlessly raising prices 25 times since January 1, gave no reason for the sudden price cut, which comes just three days before five states, including Bengal, go to the polls.

Fuel prices have risen dramatically since the start of the year and threatened to top Rs 100 a litre in certain parts of the country, stoking inflation and public anger against the Modi government which has raised federal taxes on the two fuels, by 64.6 per cent in the case of petrol and over 100 per cent in the case of diesel in the past 12 months.

The excise duty on petrol was raised from Rs 19.98 a litre on March 1 last year to Rs 32.90 this year and that on diesel from Rs 15.83 a litre to Rs 31.80 a litre, sparking criticism against the Modi government for profiting at the expense of consumers during the pandemic.

The government has tried to deflect public angst by seeking to blame the surge in pump prices on rising global crude rates.

But when that didn’t quell criticism, it quietly nudged the oil companies to hold prices — until the election results which come out on May 2.

On Wednesday, the Brent crude price for May delivery rose 5.25 per cent to $64.04 while the West Texas Intermediate, the US benchmark, climbed 5.47 per cent to $60.9 for the April contract.

It was not immediately clear whether the Indian oil companies would slash fuel prices further after the two swift cuts. If they do, it will clearly signal that the compulsions of politics has been able to smother economic prudence.

The big question on the mind of consumers if the prices of cooking gas will also be reduced to please the middle-class votebank.

Four hikes in cooking gas prices have taken the price of LPG to Rs 845.50 in Calcutta.

The LPG prices are generally revised on the first of each month. However, this may be put on hold as another hike in the middle of the election season would have political ramifications.

Bringing petrol and diesel under the GST regime is not possible for the next 8-10 years as no state is ready to face the annual revenue loss of over Rs 2 lakh crore on this account, BJP member Sushil Kumar Modi said in Rajya Sabha on Wednesday.

He had headed the empowered committee of state finance ministers on GST.

The statement assumes significance in view of the outcry over the rise in petrol price for the past over one year that touched Rs 100 per litre in some states and the demand by the Congress and some other parties that petrol and diesel be brought under the GST regime.