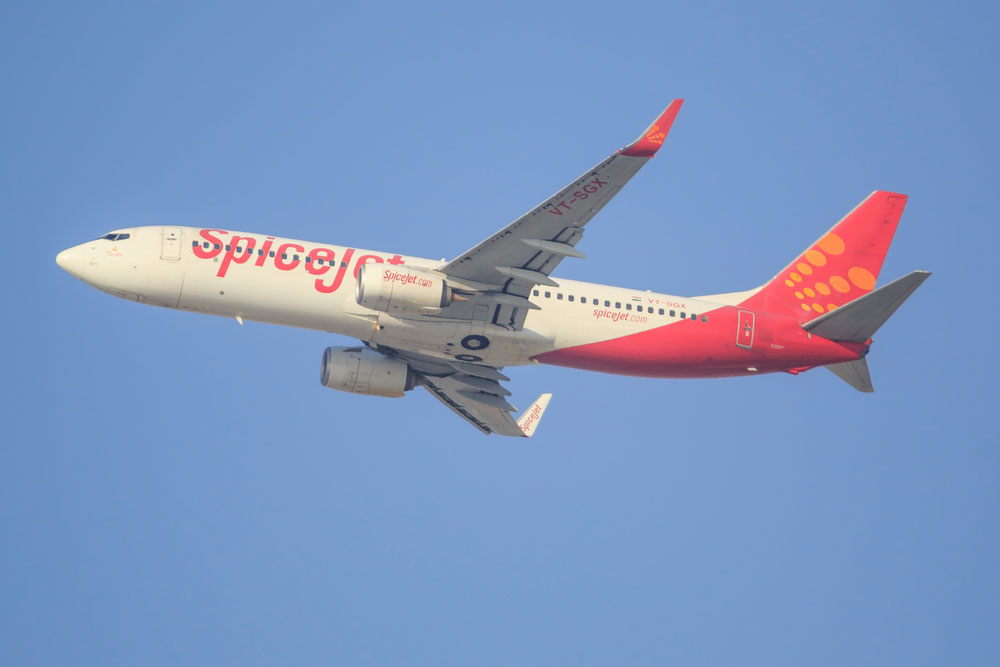 The pact covers 51 SpiceJet destinations in India, from where the airline’s passengers can travel on a single ticket via Dubai — Emirates’ base — to European and American cities
(Shutterstock)
Our Special Correspondent   |   New Delhi   |   Published 22.04.19, 07:24 PM

Code-sharing allows an airline to book its passengers on its partner carriers and provides seamless travel to destinations where the airline has no presence.

SpiceJet’s first code-share partnership with Emirates follows the grounding of the flights of Jet Airways, which has investments from Emirates’ rival Etihad. Before the grounding of all its flights at Abu Dhabi on March 18, Jet had sizeable operations in the UAE. With Jet suspending its international flights, Air India and SpiceJet are eyeing the carrier’s flying rights to West Asia.

SpiceJet has said that it will induct a total of 27 planes in two weeks to deal with the capacity reduction.

It also announced the launch of 24 flights connecting Mumbai and Delhi with other cities on its domestic network. Of these, 16 will connect Mumbai, four will connect Delhi and the remaining number are flights between the two cities.

“I am delighted to announce that as part of SpiceJet’s international expansion strategy, we have signed a Memorandum of Understanding (MoU) for a code-share agreement with Emirates. This new partnership should immensely benefit passengers travelling on both airlines,” SpiceJet chairman and managing director Ajay Singh was quoted as saying in a release.

This is SpiceJet’s second partnership with an overseas operator, since Singh took control. In 2016, it had signed an interline pact with German scheduled operator and service distributor Hahn Air.

“Our journey in India has been defined by progressive investment, partnership and growth. This partnership with SpiceJet and the mutual expansion of our network will go a long way,” said Adnan Kazim, Emirates’ divisional senior vice- president, strategic planning, revenue optimisation and aero-political affairs.

Budget carrier SpiceJet took a giant expansion stride on Monday with its code-sharing agreement with Emirates that will open up for its passengers the Dubai-based airline’s vast network across the US, Europe, Africa and West Asia. The deal, however, is subject to government approvals, besides the settlement of the controversial issue of slot allocation for the flights.

The pact covers 51 SpiceJet destinations in India, from where the airline’s passengers can travel on a single ticket via Dubai — Emirates’ base — to European cities such as London, Paris, Amsterdam, Frankfurt and Manchester as well as cities in North and South America such as New York, Washington and São Paulo.

In turn, Emirates’ passengers will be able to access the 51 cities — 10 through direct connectivity and the rest 41 through connecting flights. The 10 major cities covered under the pact are Delhi, Mumbai, Ahmedabad, Kochi, Amritsar, Jaipur, Pune, Mangalore, Madurai and Kozhikode. The smaller destinations include Goa, Hubli, Guwahati, Visakhapatnam and Tuticorin.

The deal will add a total of 67 weekly connections between Emirates’ hub in Dubai and the Indian destinations. It comes at a time of the implosion of SpiceJet rival Jet Airways, which has raised the spectre of plane shortage and fears of soaring ticket prices. Jet at its peak had 119 planes, all of which have been grounded.

The agreement will mitigate the shortage as Jet had flights to Europe and North America but raise the issue of slot allocation at airports. A Jet Airways employees’ union on Monday asked the aviation regulator DGCA to stop the allocation of the airline’s slots to other carriers till the bidding process for the airline is complete. The All India Jet Airways Technicians Association has even threatened legal action.