For the year as a whole, the economy is expected to contract  9.5% 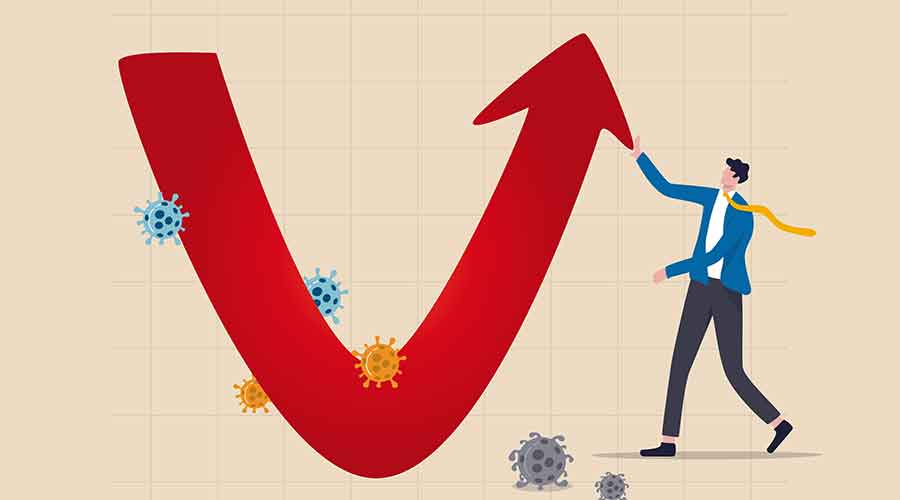 Economists expect there is room for another 25-50 basis points cut in the current fiscal and in 2021-22, the interest rate setting panel will go for a pause should the recovery take off.
Shutterstock
Our Special Correspondent   |   Mumbai   |   Published 12.10.20, 01:59 AM

The Reserve Bank of India (RBI) is expected to go in for another 25-50-basis-point cuts in the policy repo rate during this fiscal and follow it up with an extended pause with the domestic economy projected to show a sharp rise in real GDP growth during the next fiscal.

After the three-day meeting of its reconstituted monetary policy committee (MPC) that concluded on Friday, Reserve Bank governor Shaktikanta Das projected a “three-speed recovery” with the pace of growth varying across different sectors.

However, the MPC has projected a sharp recovery quarter-on-quarter: the record contraction seen in the first quarter (23.9 per cent decline) will narrow down to -9.8 per cent in the second quarter of this fiscal.

In the first quarter of the next fiscal, real GDP growth will jump 20.6 per cent, the MPC said.
Though the MPC did not give a growth projection for 2021-22, the RBI’s monetary policy report which accompanies the MPC statement projected real GDP will grow 10.1 per cent.

This is more than the median projection of professional forecasters at 8.2 per cent. The RBI’s optimism with regard to growth is shared by others as well, though this will largely be because of the base effect.

Standard & Poor’s has said  economic activity in India will begin to normalise in 2021-22, resulting in real GDP growth of about 10 per cent pointing out that “a significant proportion of this rebound will be due to the very weak base in the current fiscal year”.

On the other hand, a Jefferies report puts 2021-22 real GDP growth at 12 per cent, helped by the low base in the first half.

Analysts  said  the supply of vaccine will be a key factor to shape up the economic activity. The monetary policy report is assuming supply chains are fully restored with the availability of effective vaccines and a normal monsoon.

MPC also expects no major exogenous or policy shocks along with a large favourable base effect. The panel noted that in such an environment, the significant monetary accommodation already provided through cuts in the policy repo rate and ample liquidity infusion through conventional and unconventional measures would add to the upside.

Besides, the fiscal stimulus and other structural reform measures announced by the government would be expected to play their part.

Economists expect there is room for another 25-50 basis points cut in the current fiscal and in 2021-22, the interest rate setting panel will go for a pause should the recovery take off.