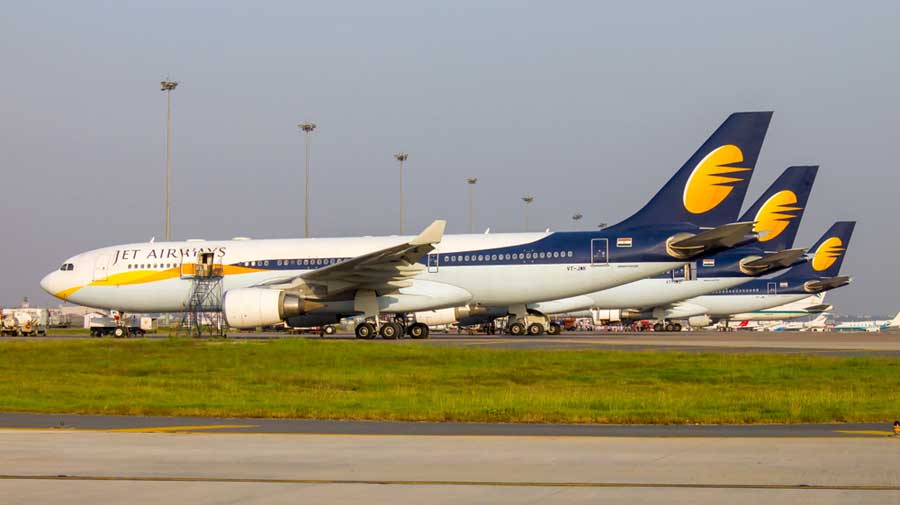 Jet Airways was in the news last month when Vrihis Properties emerged as a successful bidder for its Bandra Kurla Complex and the company 'decided' to accept the offer at Rs 490 crore.
Shutterstock
Our Bureau   |   Mumbai   |   Published 23.07.20, 03:06 AM

Shares of Jet Airways were locked at the upper circuit on Wednesday amid reports that the now defunct airline has received two bids.

On the BSE, the Jet Airways share ended 4.89 per cent higher at Rs 27.90. The rally came on news that two consortium had submitted their bids on Tuesday.

A Moneycontrol report said that one of the consortium was Flight Simulation Technique Centre Pvt Ltd (FSTC), Big Charter Pvt Ltd and Imperial Capital Investments LLC. Both FSTC and Big Charter are led by entrepreneur Sanjay Mandavia, while Imperial Capital is an investment banking and wealth management company based in Dubai.

Jet Airways was in the news last month when Vrihis Properties emerged as a successful bidder for its Bandra Kurla Complex and the company “decided” to accept the offer at Rs 490 crore.

The Jet Airways resolution professional had issued a public notice on June 13 for the sale or transfer of third and fourth floors of the company’s building in “Jet Airways Godrej BKC” by way of public auction at a reserve price of Rs 490 core.

The insolvency professional had sought the permission of the National Company Law Tribunal for the sale of the premises after a resolution was passed at the meeting of the committee of creditors held on April 24 with approval of 74.45 per cent votes.

The Principal Bench of the NCLT in its order on June 11 had granted permission to the airline to sell the premises for utilising the proceeds to settle Rs 360 crore dues of HDFC, as against the latter’s claim of Rs 424 crore.