This is a watershed moment for our bilateral relations: Modi 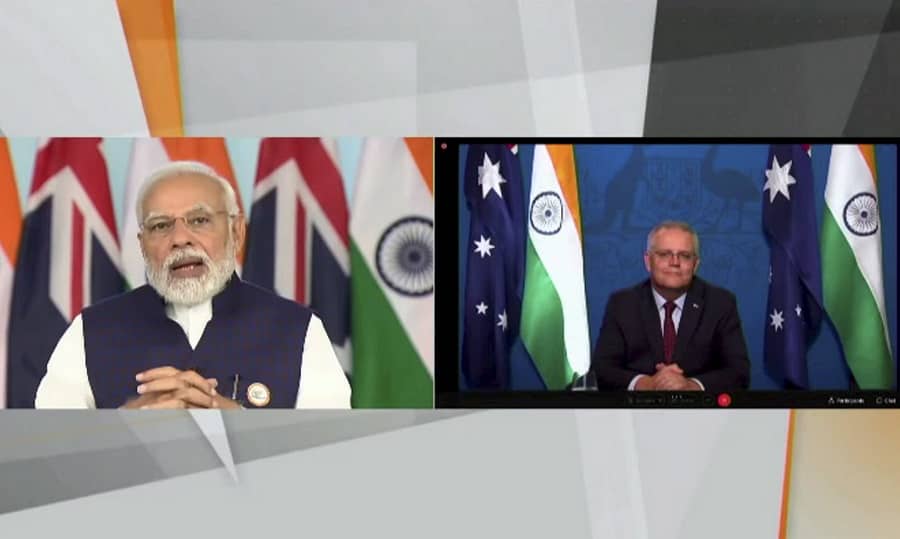 India and Australia on Saturday signed an economic cooperation and trade agreement under which Canberra would provide duty free access in its market for over 95 per cent of Indian goods such as textiles, leather, jewellery and sports products.

The India-Australia Economic Cooperation and Trade Agreement was inked by Commerce and Industry Minister Piyush Goyal and Australian Minister for Trade, Tourism and Investment Dan Tehan in a virtual ceremony, in the presence of Prime Minister Narendra Modi and his Australian counterpart Scott Morrison.

This is truly a watershed moment for India-Australia relations, Prime Minister Modi said. Morrison added that the pact will further deepen Australia's close ties with India.

The agreement will help in taking bilateral trade from USD 27 billion to USD 45-50 billion in the next five years, Goyal said.

Australia is offering zero duty access to India for about 96.4 per cent of exports (by value) from day one. This covers many products which currently attract 4-5 per cent customs duty in Australia.

Australia is the 17th largest trading partner of India, while New Delhi is Canberra's 9th largest partner. Bilateral trade in goods and services stood at USD 27.5 billion in 2021.

India's goods exports were worth USD 6.9 billion and imports aggregated to USD 15.1 billion in 2021.

Major exports by India to Australia include petroleum products, textiles and apparels, engineering goods, leather, chemicals and gems and jewellery.

The economic cooperation and trade agreement signed between India and Australia will enable the two countries to fully leverage the existing opportunities, besides facilitating the exchange of students, professionals and tourists, Prime Minister Narendra Modi said on Saturday.

The India-Australia Economic Cooperation and Trade Agreement (IndAus ECTA) was signed by Commerce and Industry Minister Piyush Goyal and his Australian counterpart Dan Tehan in the presence of Prime Minister Modi and Australian Prime Minister Scott Morrison in a virtual ceremony.

Modi said signing of the pact in such a short span of time reflects the depth of the mutual confidence between the countries.

He also underlined the huge potential that exists in the two economies to fulfil each other's needs, adding that this agreement will enable the countries to fully leverage these opportunities.

"This is a watershed moment for our bilateral relations...On the basis of this agreement, together, we will be able to increase the resilience of supply chains, and also contribute to the stability of the Indo-Pacific region," Modi noted.

This agreement, he said, will also facilitate the exchange of students, professionals, and tourists between the two nations.

Terming the signing of the pact as another milestone in the growing relationship between India and Australia, Prime Minister Morrison said the agreement further develops on the promise of the relationship.

Apart from increased trade and economic cooperation, he said, the agreement will further deepen the "warm and close ties" between the people of the two countries by expanding work, study and travel opportunities.

The Australian Prime Minister said the agreement would create enormous trade diversification opportunities for domestic producers and service providers bound for India, valued at up to USD 14.8 billion each year.

"This agreement opens a big door into the world's fastest growing major economy for Australian farmers, manufacturers, producers and so many more," he said, adding by unlocking the huge market of around 1.4 billion consumers in India, "we are strengthening the economy and growing jobs right here at home".

"This agreement has been built on our strong security partnership and our joint efforts in the Quad, which has created the opportunity for our economic relationship to advance to a new level," he noted.