Haldia, a manufacturing cluster, bore the biggest brunt as it was closest to the landfall of the tropical storm 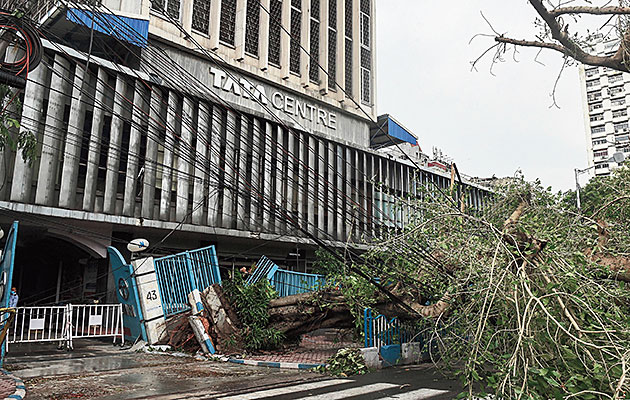 Two out of the three most densely packed industrial clusters of Bengal suffered medium to heavy damage as cyclone Amphan pummelled the southern districts of the state, delaying a resumption of business activity which was already hit by the prolonged lockdown because of Covid-19.

Haldia, the industrial port town in East Midnapur, bore the biggest brunt as it was closest to the landfall of the cyclone, located around 50 kilometre south of Digha.

An initial estimate suggests industries located there suffered damages to the tune of Rs 100 crore, with the biggest casualty being Renuka Sugar, where a boiler chimney broke down. Haldia Petro and Adani Wilmar suffered, too.

The clusters around greater Calcutta also bore the brunt of Amphan’s fury as the wind speed soared up to 130 km per hour.

The tremor was felt inside the board rooms too as two scheduled meetings had to be cancelled as directors could not join. Tata Metaliks cited telecom and connectivity issues to defer the meeting, which was to declare the March quarter results. Birla Corporation decided to hold a similar meeting on Friday.

At least four people died at the Haldia industrial township and a few thousands were rendered homeless in the disaster. Varun Sarengi, vice-president of Renuka Sugar, said a chimney broke down and the warehouse collapsed at a unit which was closed for maintenance. “The damage is to the tune of Rs 35-40 crore. It will set our work back by another 2-3 months,” Sarangi said.

Haldia Petro general manager Debasis Sen said there has been damage to sheds and warehouses. “Engineers are assessing the damage. More than 50 per cent employees could not report to work.”

Suvendu Adhikari, chairman of Haldia Development Authority, said the cyclone swept past Haldia, damaging many units in the township. But despite the mayhem, Haldia Dock System started operation from this morning.

Industries located on the either side of the river Hooghly faced the fury most.

“There has been considerable damage to various sections of Birla jute mill at Birlapur. Very high tidal waves pushed river water on to the mill floor,” a Birla Corporation spokesperson said.

Gyanesh Chaudhary, MD and CEO, Vikram Solar, which has a unit at Falta, said all units at this SEZ in the South 24-Parganas have taken a hit. “Power lines are down, internet is down and there is serious damage because of the cyclone. It is right next to the river.”

Sanjay Budhia, MD Patton Group, said: “There was heavy damage to our unit in Falta as well as our other units in the state. It took my factory manager six hours to reach Falta. For export business time is essence.”

“We were getting ready to start after lockdown and it is further delayed and another 3-4 days would be taken. The shades have collapsed. Power supply has gone down, water has seeped in some of the units. In some places the boundary wall has broken. There is no human casualty but casualty in terms of cost and delay in operations,” he said.