The tender process to award a berth at Haldia was held in abeyance by the Syama Prasad Mookerjee Port, as per the court's directive 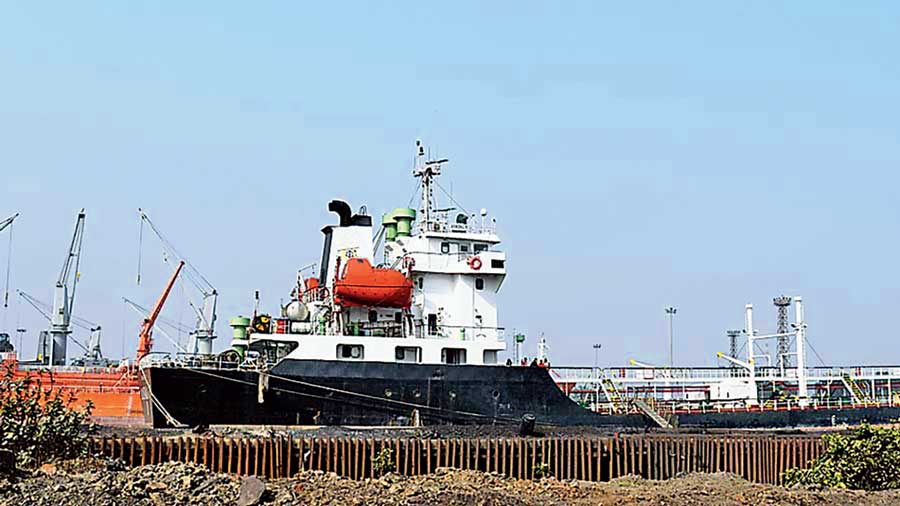 Adani Group’s entry to the Bengal’s maritime sector survived a legal scare after Calcutta High Court set aside a challenge mounted by a disqualified competitor.

The tender process to award a berth at Haldia was held in abeyance by the Syama Prasad Mookerjee Port, Calcutta, as per the directive of  the court, which had put an interim stay on the process, pending judgment.

Last week, the court dismissed the legal challenge of Orissa Stevedores Ltd (OSL) and lifted the stay allowing the port to process the contract. SMP, Calcutta, will now approach the Union ministry of ports and shipping for final approval before awarding the contract.

“We are sending necessary documents to the ministry for approval. The contract will be signed after we get the ministry’s nod,” Vinit Kumar, chairman of SMP, Calcutta, confirmed over the weekend.

The Telegraph had reported on October 4 that Adani Group, India’s largest private sector port operator, was found to be the highest bidder for a

In November, this newspaper also reported that Adani appeared for a pre-bid meeting on the Bengal government-sponsored Tajpur port. Earlier this month, India’s second richest man and Adani Group chairman Gautam Adani flew down to Calcutta to meet Bengal chief minister Mamata Banerjee to explore business opportunities in the state. Haldia and Tajpur featured in the discussion, sources later claimed.

OSL had also participated in the Haldia tender but it was disqualified on the basis of an input from the Union home ministry. The OSL-led consortium was denied security clearance citing national security concerns, court documents show.

The home ministry report submitted before the court mentions criminal cases against one of the largest shareholders of the OSL-led consortium. The said shareholder was required to be deported from Thailand to India to face criminal charges. The lead counsel for OSL informed that the shareholder is “enlarged on bail and is at liberty in India”.

It was observed in the court that OSL holds a 38.16 per cent stake in a three-way consortium special purpose vehicle called Gopalpur Ports Ltd, which had bid for the Haldia tender.

Counsel for OSL also argued that, “the petitioner is a juristic person separate from that of an individual shareholder. The pendency of the criminal proceedings against one shareholder, should not stand in the way of the petitioner competing in the said tender process”.

He insisted that a mere assertion of threat to national security would not suffice. It must be backed by records, documents and figures.

The counsel for Port countered that the criminal proceedings against a 38.16 per cent shareholder of one Indian partner would seriously affect the whole consortium.

Relying upon a Supreme Court judgment, port counsel argued that it has been laid down that national security is a question of policy and not law. Courts should not normally intervene in matter concerning national security or the decision of the executive based on the same.

Justice Rajasekhar Mantha concurred. “Indeed, a shareholder is a distinct personality from the company which is a juristic person. However, a 38.16 per cent shareholder can and should exercise a controlling interest in the petitioner. It may be too artificial to distinguish the said shareholder from the writ petitioner in the facts of this case.

It would be clear if the corporate veil of the petitioner is lifted that the real person in control and management of the writ petition is the said particular shareholder having 38.16 per cent shares and hence a controlling interest,” the judgment read.

It also added that the court could not brush aside the objection of the Centre. The judgment added: “The awardee would have to oversee a huge amount of cargo moving in and out of India. The withholding of clearance of the petition by the Union, in this regard, therefore, is not found without basis…The Tender process may go ahead excluding the petitioner from participation.”

Orissa Stevedores Limited, however, is not sitting idle either. Lead counsel of the company indicated that it would move the division bench of HC challenging the order of the single bench this week.

The port appears to be unfazed despite the fresh poser. “They have a right to move but we are going ahead. There is no legal fetter on us,” an official of SMP, Calcutta pointed out.