'We are deeply saddened by the untimely demise of Rakesh' 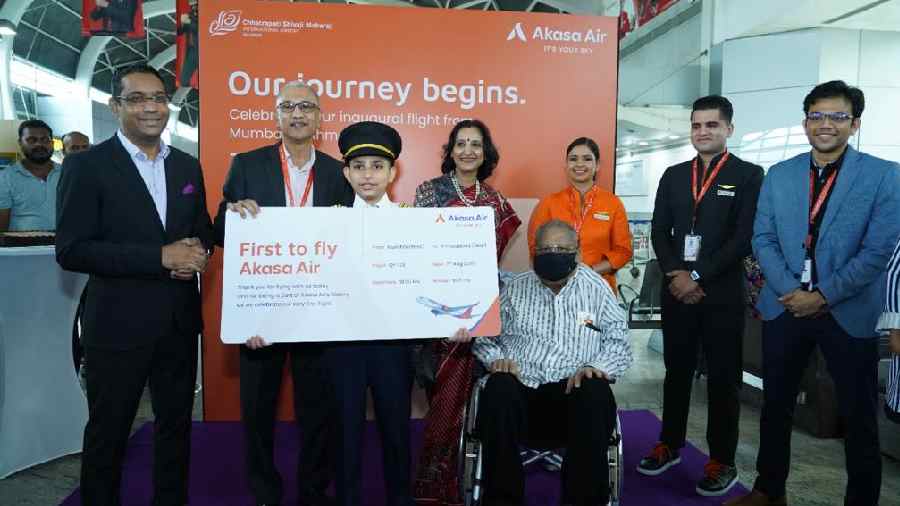 Akasa Air, which took to the skies just a week ago, will honour the legacy, values and beliefs of its late billionaire investor Rakesh Jhunjhunwala by striving to operate a "great airline", according to its chief Vinay Dube.

"Conceived and born in 12 months", Akasa Air's identity even before it started flying has been much associated with Jhunjhunwala, one of the backers of the venture.

In the high growth potential and increasingly competitive Indian civil aviation space, the trajectory of Akasa Air, which started off its first flight on August 7 on the Mumbai-Ahmedabad route, will be closely watched.

Dube, founder and CEO at Akasa Air, said, "We are deeply saddened by the untimely demise of Rakesh Jhunjhunwala this morning."

He also mentioned about the billionaire investor being an early believer in the team and putting his trust and faith in them to build a world-class airline.

As condolence messages pour in following the demise of Jhunjhunwala, known as the 'Big Bull' and 'Warren Buffett of India' for his investment acumen, Akasa Air will miss him much in terms of strategic guidance.

Though he was not associated with the day-to-day affairs of Akasa Air, the fact that the 62-year-old investor had put in the money had itself given the much-needed tailwind for the airline. It was also the first scheduled domestic carrier to be launched in India in nearly a decade.

"Jhunjhunwala had an invincible spirit, was deeply passionate about everything Indian and cared greatly for the well-being of our employees and customers. Akasa Air will honour Jhunjhunwala's legacy, values and belief in us by striving to run a great airline," Dube said in a statement.

Aviation veteran and one of Akasa Air's founders, Aditya Ghosh, said he is shocked, saddened, numb and at a loss for words.

Describing the demise of Jhunjhunwala as a "deeply personal loss", Ghosh said so many memories are flashing by since morning.

"What remains imprinted in my heart and mind is RJ's love of life, courage, simplicity of heart, genuine affection and mostly importantly, childlike laughter," he said in a tweet.

The airline is owned by SNV Aviation Pvt Ltd. According to reports, Jhunjhunwala owns 40 per cent stake and Ghosh has 10 per cent, among others.

At the inaugural ceremony of Akasa Air's first flight at the Mumbai airport last Sunday, a wheelchair-bound Jhunjhunwala was all praise for the civil aviation ministry officials for their cooperation in getting the airline started.

"... nowhere in the world is an airline conceived and born in 12 months. Normally, a child is born in 9 months, we took 12 months," he had said at the ceremony where the first flight was flagged off virtually by Civil Aviation Minister Jyotiraditya Scindia.

The minister had said it was a very important day in the history of civil aviation in India.

Akasa Air, which describes itself as the country's "newest and most dependable airline", has placed a firm order for 72 Boeing 737 MAX planes.

The country's largest airline IndiGo said Jhunjhunwala was an inspiring personality and will be deeply missed.

"Jhunjhunwala was a towering figure in India's financial world, and we also commend his recent contribution to Indian aviation with the launch of Akasa Air," the carrier said in a statement.

Condolences pour in for Jhunjhunwala