Condolences pour in for Rakesh Jhunjhunwala

We have lost a brilliant business mind and farsighted investor who possessed a unique vision for growth, says Lok Sabha Speaker Om Birla 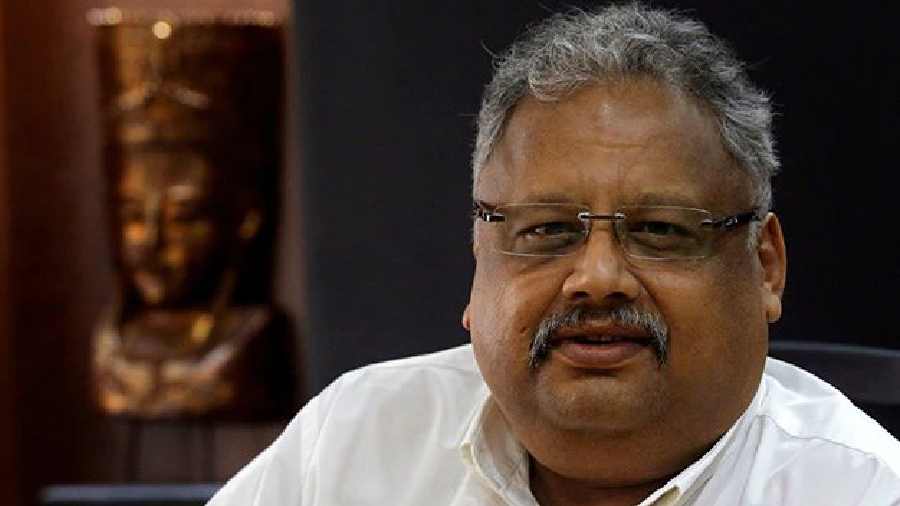 Ace stock market investor Jhunjhunwala, often referred to as India's Warren Buffett, died in Mumbai on Sunday morning. He was 62.

Jhunjhunwala passed away early this morning due to a cardiac arrest, a source in his newly set up airline said.

"Rakesh Jhunjhunwala was indomitable. Full of life, witty and insightful, he leaves behind an indelible contribution to the financial world," Modi said in a tweet.

"He (Jhunjhunwala) was also very passionate about India's progress. His passing away is saddening. My condolences to his family and admirers. Om Shanti," the prime minister said.

Lok Sabha Speaker Om Birla said he was pained to know that business magnate Jhunjhunwala, who promoted several premier enterprises, is no more.

"In his demise, we have lost a brilliant business mind and farsighted investor who possessed a unique vision for growth. May his soul attain the feet of Mahaprabhu," Birla said.

A host of ministers also condoled Jhunjhunwala's demise and hailed his contribution to the financial world.

Home Minister Amit Shah expressed anguish at the passing away of Jhunjhunwala.

"His vast experience and understanding of the stock market have inspired countless investors. He will always be remembered for his bullish outlook. My deepest condolences to his family. Om Shanti Shanti," Shah tweeted.

BJP chief J P Nadda said he was saddened by the terrible news of the passing away of the veteran investor.

"May the departed soul rest in eternal peace and may Prabhu Ram give strength to his family members and loved ones. Om Shanti," he tweeted.

Defence Minister Rajnath Singh said he was shocked by the sudden demise of Jhunjhunwala.

"He will be remembered for his contributions in business and industry. He was at the forefront of creating a culture of investing in Indian stock markets. Condolences to his family and many admirers," Singh said in a tweet.

Condoling Jhunjhunwala's demise, Aviation Minister Jyotiraditya Scindia said he will be remembered for giving India its new airline Akasa Air after more than a decade.

Scindia had on August 7 inaugurated Akasa Air's first flight, which operated from Mumbai to Ahmedabad.

Scindia said: "Shri Rakesh Jhunjhunwala Ji was not only an astute businessman, but also passionately invested in India's growth story."

Finance Minister Nirmala Sitharaman condoled his demise and said he was a "bold risk taker, masterly understanding of the stock market, clear in communication- a leader in his own right".

Women and Child Development Minister Smriti Irani said she had lost her "brother" with the passing away if Jhunjhunwala.

"They call him a billionaire investor, the badshah of BSE but what he really was is and always will be is a dreamer He was tenacious, he was tender, he was graceful, he was as my gentle giant. Bhaiyya always told me 'apan apne dam par jiyenge ' .. and he lived on his own terms ," she said.

Minister for Road Transport and Highways Nitin Gadkari expressed sadness over the passing away of Jhujhunwala and said he had been the part of India's growth story and an inspiration to budding investors.

Minister of Petroleum and Natural Gas and Minister of Housing and Urban Affairs Hardeep Singh Puri said the demise of Jhunjhunwala is deeply saddening.

In a tweet, Shiv Sena leader Aaditya Thackeray said, "Bidding adieu to the Big Bull of Dalal Street, Rakesh Jhunjhunwala ji.My heartfelt condolences are with his family and loved ones. Om Shanti."

Another Shiv Sena leader Priyanka Chaturvedi also expressed sadness at Jhunjhunwala's demise, and said he was not just bullish about the stock market but also about the nation.

"My heartfelt condolences to his family, friends and colleagues," he said.

Condoling the investor's death, Congress leader Jaiveer Shergill said his death is a big loss to the financial world and his ability to sense the pulse of the market will always remain unmatched.

"A veteran investor & industrialist, his contribution to the Indian Capital Market was immense. The Big Bull of Dalal Street leaves behind an inspiring legacy. Condolences to his family and friends," he said.

"India has lost a gem, who made a mark not just on the stock market but on the minds of almost every investor in India," he said.