Tejas on posters with MLA accused of rape

Embarrassment for RJD leader on ‘Save Constitution’ tour as he hits Nawada, where his local lawmaker is in jail 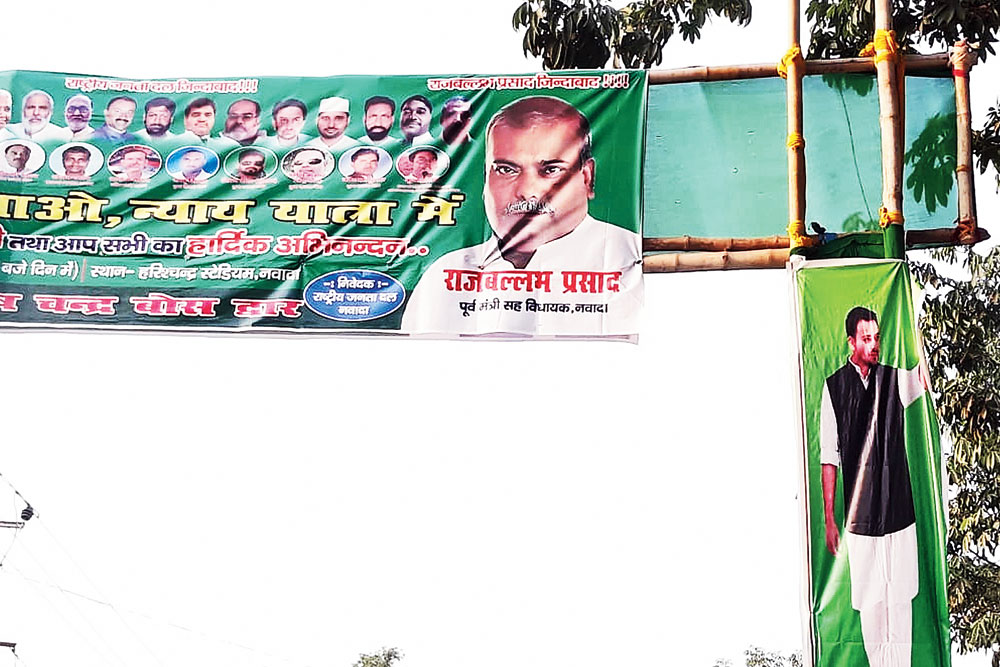 The posters left the RJD red faced even as the ruling Janata Dal United was quick to launch an attack.

At the public meeting, Tejashwi warned that reservation would be under threat if the BJP returns to power in the 2019 Lok Sabha election and accused “Nitish Chacha” of betraying the people’s mandate. But he did not utter a word on the posters.

“Why did not you go to meet the family of the victim who was raped by your MLA?” asked JDU MLC and spokesperson Neeraj Kumar. “You are wearing a mask of fighting corruption and crime when you yourself are associated with criminals.”

He also wrote an open letter to Tejashwi’s mother and former chief minister Rabri Devi, accusing her party and son for glorifying and giving political legitimacy to criminals.

The RJD hit back.

He said that Raj Ballabh Yadav was the local MLA of Nawada and there was nothing wrong in his posters appearing with Tejashwi. “Raj Ballabh Yadav’s guilt is still to be proved in court,” Birendra added.

The case against Raj Ballabh played a major role in bringing out differences between Lalu Prasad and Nitish Kumar. When the Bihar government appealed in the Supreme Court against the bail given to the controversial MLA by Patna High Court and got it cancelled, there was a war of words between JDU and RJD leaders. The RJD MLA surfacing at 10 Circular Road, Lalu’s residence, while he was wanted by the police was also frowned upon by Nitish.

This is not the first time Tejashwi’s Yatra has run into controversy. In Gopalganj a selfie with a history sheeter surfaced. In Siwan he met the wife of RJD ex-MP Mohammad Shahbuddin whose conviction in killing two brothers was upheld by the Supreme Court. These incidents triggered off charges and accusations by NDA leaders.

Even senior RJD leaders privately conceded that though Tejashwi’s Yadav’s Yatra had evoked good crowd response, he should be more careful in avoiding controversies.