Death in J&K, grief in Rohtas

The Badladih village in Rohtas, around 125km southwest of Patna, broke into wails after news of Indian Air Force's Garud commando Jyoti Prakash Nirala's martyrdom in an anti-terror operation in Jammu and Kashmir reached on Sunday morning. 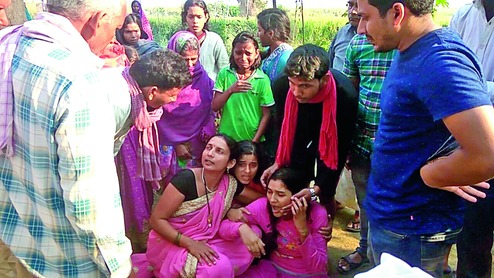 Patna: The Badladih village in Rohtas, around 125km southwest of Patna, broke into wails after news of Indian Air Force's Garud commando Jyoti Prakash Nirala's martyrdom in an anti-terror operation in Jammu and Kashmir reached on Sunday morning.

The commando, who was in the rank of a corporal, died after being seriously injured in a fierce encounter on Saturday in which six foreign terrorists, including Lashkar-e-Taiba chief Zaki-ur-Rehman Lakhvi's nephew Owaid alias Obama, were killed.

Chief minister Nitish Kumar expressed grief over Nirala's death and announced a compensation of Rs 11 lakh to his family and announced that the martyr will be accorded a state funeral. Nirala, the sole earning member of his family, joined the Air Force in 2005, and was the eldest among five siblings, including four sisters, of whom one is married.

He got married in 2010 to Sushma, a resident of Barun in the neighbouring Aurangabad, and has a four-year-old daughter Jigyasa. Nirala's wife and daughter reside in Chandigarh, while the rest of his family, including ailing parents, lived in his ancestral house at Badladih. While Nirala's mother and youngest sister wailed about how the family will survive without him, his father Tej Narayan Singh has been left heartbroken by the tragedy.

"I have lost everything. Nothing is left in my life now. I am shattered but I am also proud that my son sacrificed his life for the motherland. I don't know how I will get my three daughters married," Singh, a farmer, said.

He also criticised the central government for "neglecting" the armed forces.

The body of the slain commando was taken to Chandigarh Air Force station, where senior officials conducted a wreath-laying ceremony and paid floral tributes. It will be flown to the Bihta air base near Patna on Sunday night.

Rohtas district magistrate Animesh Kumar Parasar, who visited Nirala's house with other officials, said: "We have been informed by the Air Force officials that they will start with the slain martyr from Bihta at 8am on Monday and reach his village between 11.30am and 12pm. The final journey of Nirala for the last rites will commence from his house at Badladih. We have made arrangements for the state funeral. A guard of honour will be accorded by the Bihar Police jawans and a wreath-laying ceremony will be held."