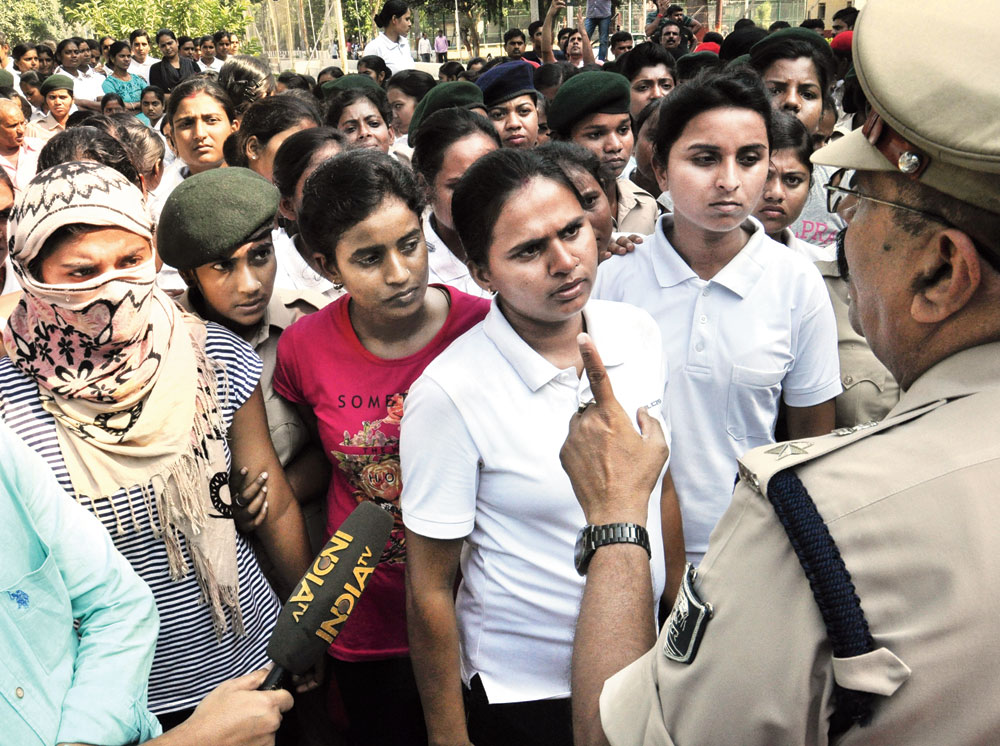 Trainee constables demonstrate in front of the commandant’s office on the BMP 5 campus in Patna on Wednesday.
Picture by Manoj Kumar
Ramashankar   |   Patna   |   Published 31.10.18, 06:27 PM

Shambhu Sharan Rathod, a subedar in the Bihar Military Police (BMP), was suspended and an FIR was lodged against him after a trainee woman constable alleged Rathod had molested her in his office on Wednesday.

The action came after hundreds of women trainee constables gathered in front of the office of the commandant of the BMP’s 5th battalion, Ranjeet Kumar Mishra, demanding lodging of a criminal case and immediate arrest of the accused.

Rathod, according to the complaint lodged with the Women’s police station in Patna, called the trainee constable to his office after the routine parade on the ground and allegedly molested her.

The trainee constable, a member of the BMP’s 15th battalion stationed at Valmikinagar in West Champaran, had asked for water bottles from the inspector-rank officer.

They were so angry that they asked the senior cops to hand over the accused to punish him on the spot.

The situation was brought under control after the intervention of senior police officials and disciplinary action was initiated against Rathod, who is absconding.

Commandant Mishra said he had apprised director-general of police K.S. Dwivedi of the incident soon after he came to know about it. The subedar was suspended and transferred to Dumraon in Buxar with immediate effect.

“Rathod, who was posted in Patna for the last 28 years, has been directed to join the 4th battalion of the BMP stationed at Dumraon in Buxar till the investigation is completed. The Patna police officials are probing the allegations,” Mishra told The Telegraph.

Rathod remained posted in Patna for so long because he happened to be an office-bearer of the association.

Altogether 310 newly recruited constables are being imparted training on the campus of the BMP.

Shocked over the alleged molestation incident, a senior IPS officer said: “This is just the tip of the iceberg. Days are not far off when more incidents of rape and molestation will occur.”

Patna police have launched raids to arrest Rathod. “We are also cooperating with the Patna police in their action against the erring cop,” Mishra added.

BMP director-general Gupteshwar Pandey said departmental action, which may be dismissal from service, will be taken against Rathod based on findings of the probe.

“Such acts of indecency will not be tolerated at any cost. After a thorough investigation in the matter, departmental action will be taken against Rathod and he may be dismissed from service,” PTI quoted Pandey as saying.