The Cartier Travel With Style Concours D’elegance 2019 was a show of grace and grandeur as vintage and classic cars and bikes vied for top honours. 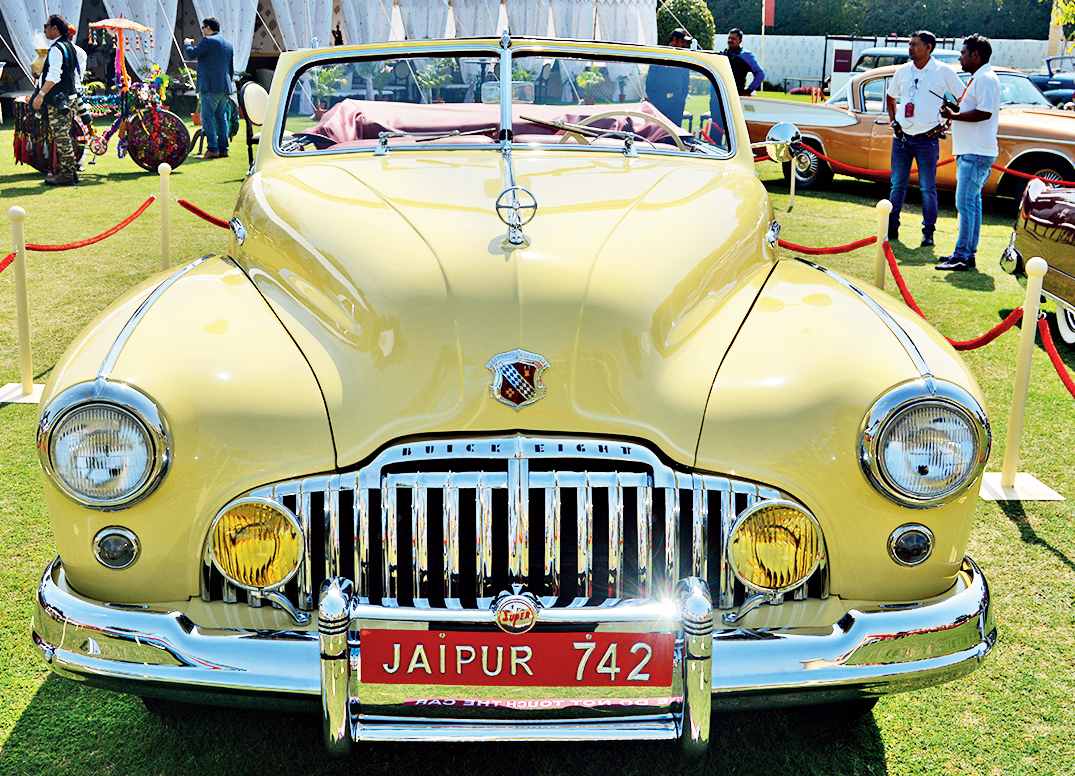 Once a Jaipur royal family car, this 1946 Buick Super 8 is now with Dinesh Lal from Mumbai, who has restored it to its original paint shade and upholstery. It was judged the best Post-War American Classic.
Abhijit Mitra   |   Published 28.02.19, 03:26 PM

The sixth edition of Cartier Travel With Style Concours d’Elegance was held at the Rambagh Palace, Jaipur, on February 24. This time there were 86 four-wheelers — cars and transportation vehicles — plus 26 motorcycles. That made it the biggest in terms of four-wheeler turnout, although there have been higher number of motorcycles in earlier editions.

This year, the Pre-War Transportation Class was a new category that was introduced. This seemed to resonate well with the visitors and proved to be a big draw. According to the curator of the show, Manvendra Singh of Barwani, “These particular vehicles are all bodied in India by Indian artisans. This was the style of cars made after the buggy and bail gaadi and before they went onto the European and the American style. The reason for promoting this new class of cars is that if not showcased then they will go into scrap. These are typical Indian things which have Indian heritage, Indian connection, have been used only in India and display the distinct culture of how we travelled in our cars.”

The Jaipur concourse had three other categories of cars for the first time. They were the Ford Thunderbird Class and the Sportscars of the 1960s and the 1970s. There were five cars on show in the Thunderbird category spanning 1955 to 1965. Says Singh: “In this new class showcasing sports cars of 1960s and 1970s, there are two Jaguars, two Ferraris and two Alfa Romeos. This is the class that I would like to explore further and include in the upcoming editions to showcase these cars that have recently come into India.”

Setting the bar really high at this edition were five cars that had competed at the Pebble Beach Concours d’Elegance in 2018 and won prizes as well. They included the overall Best of Show winner and other prize winners as well.

The show also had a handful of cars that had belonged to or continue to be owned by the royal family of Jaipur. So there was a homecoming of sorts for those vehicles when they were put on display on the Rambagh Palace lawns.

Says Singh: “While curating the show it is important to look at not only what has happened in the history of automobiles but also where the future of automobiles is going to go. One of the biggest things Cartier has done for India, besides jewellery, is the Concours that started in 2008 and the quality of restoration is so good that now the cars from India are participating internationally.”

We are already looking forward to edition number seven. 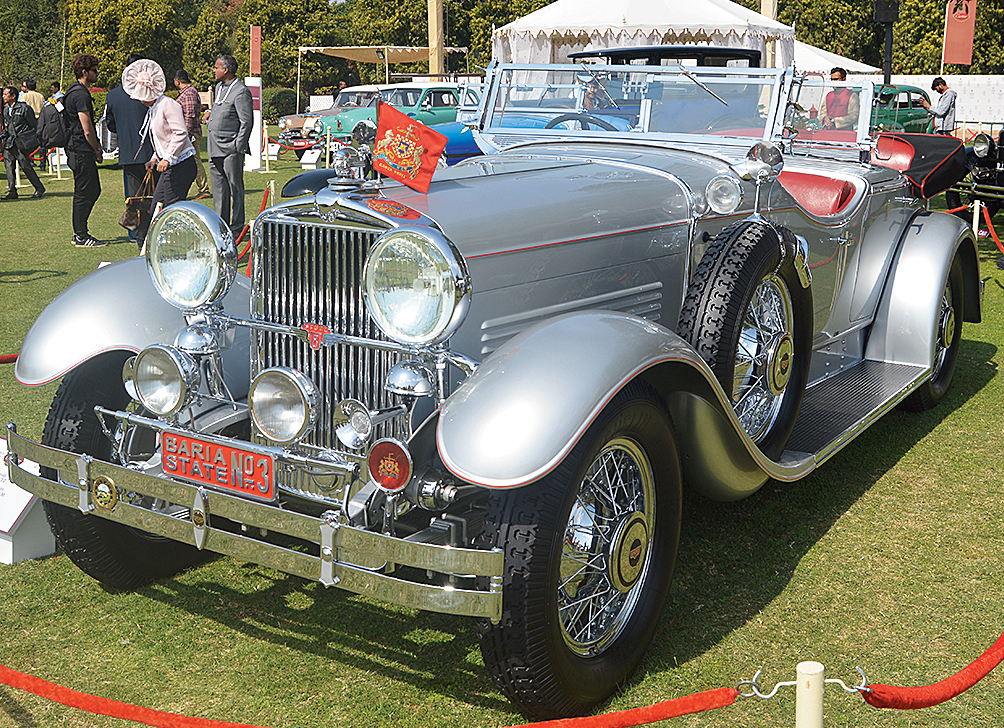 Delhi-based Diljeet Titus’s 1930 Stutz Model M, which has been re-restored to the specs in which it had come to India, won the top honours in the Pre-War Classic American class.

This year there was a special class for Ford Thunderbirds. This immaculate hardtop coupe from 1961 belonging to Viveck and Zita Goenka from Mumbai took the Best in Class.

Gurgaon-based Madan Mohan’s 1928 Gardner 85 roadster is a rare car and the only one in India. These cars came in 50 colours and with 25 interior options. Its straight-8 engine made it a fast car. 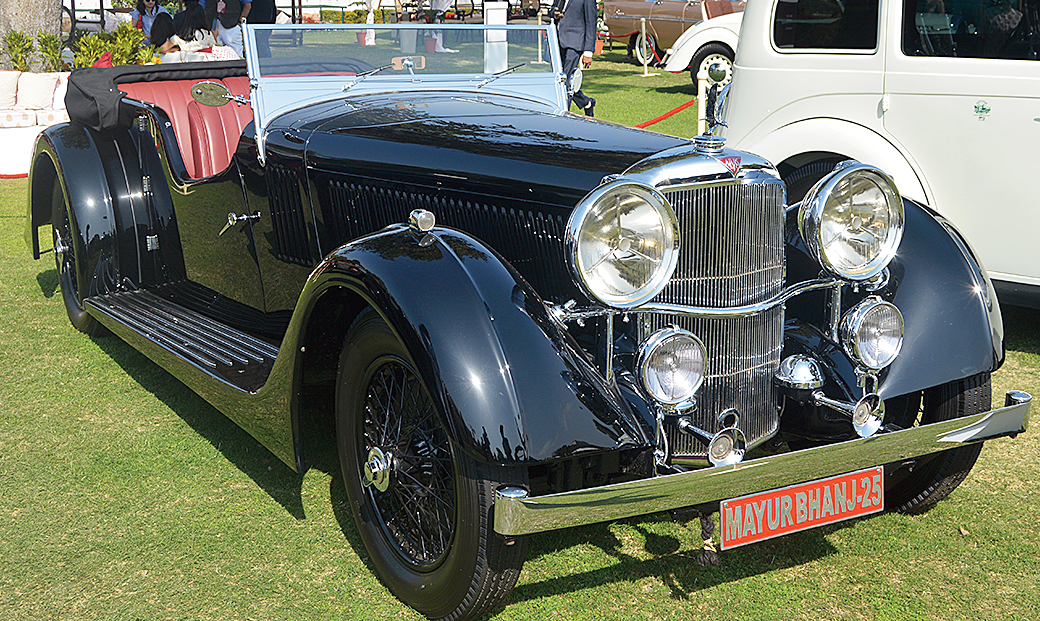 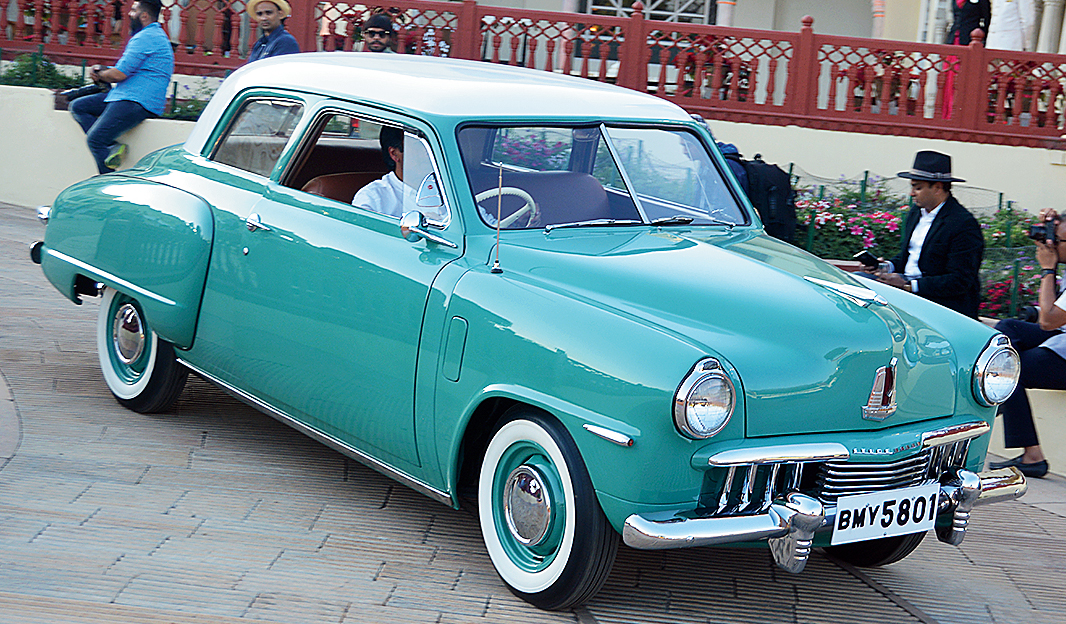 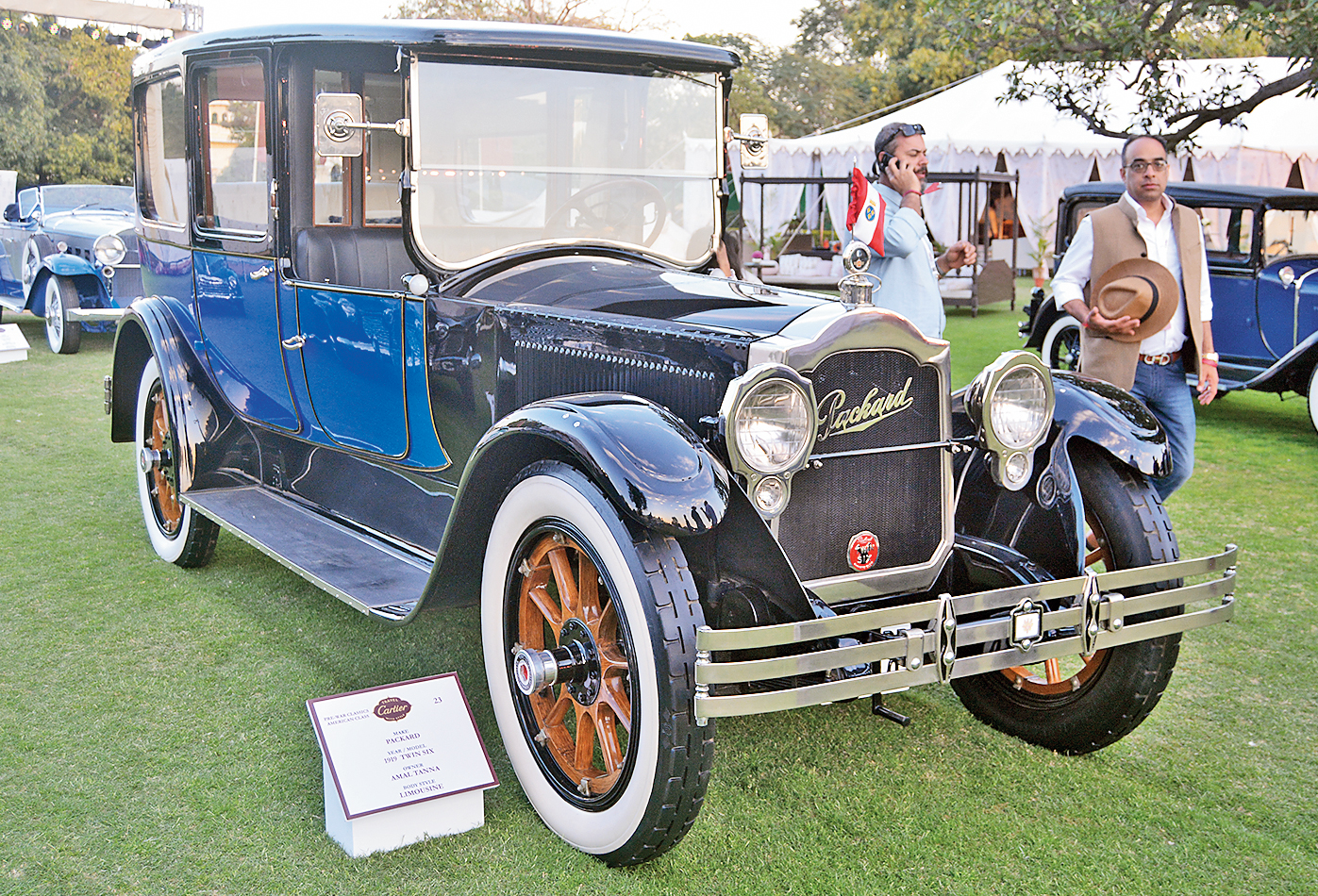 This very upright and stately 1919 Packard Twin Six was once the official car of the governor of Pondicherry when it was still a French territory. The French government’s emblems can still be seen on the front bumper and the inside door handles.

Ansaldos were Italian cars made mostly in the 1920s. This 1922 Tipo F owned by Nitin Dossa from Mumbai was brought back from near death and, fittingly, won the Cartier Resurrection Cup. 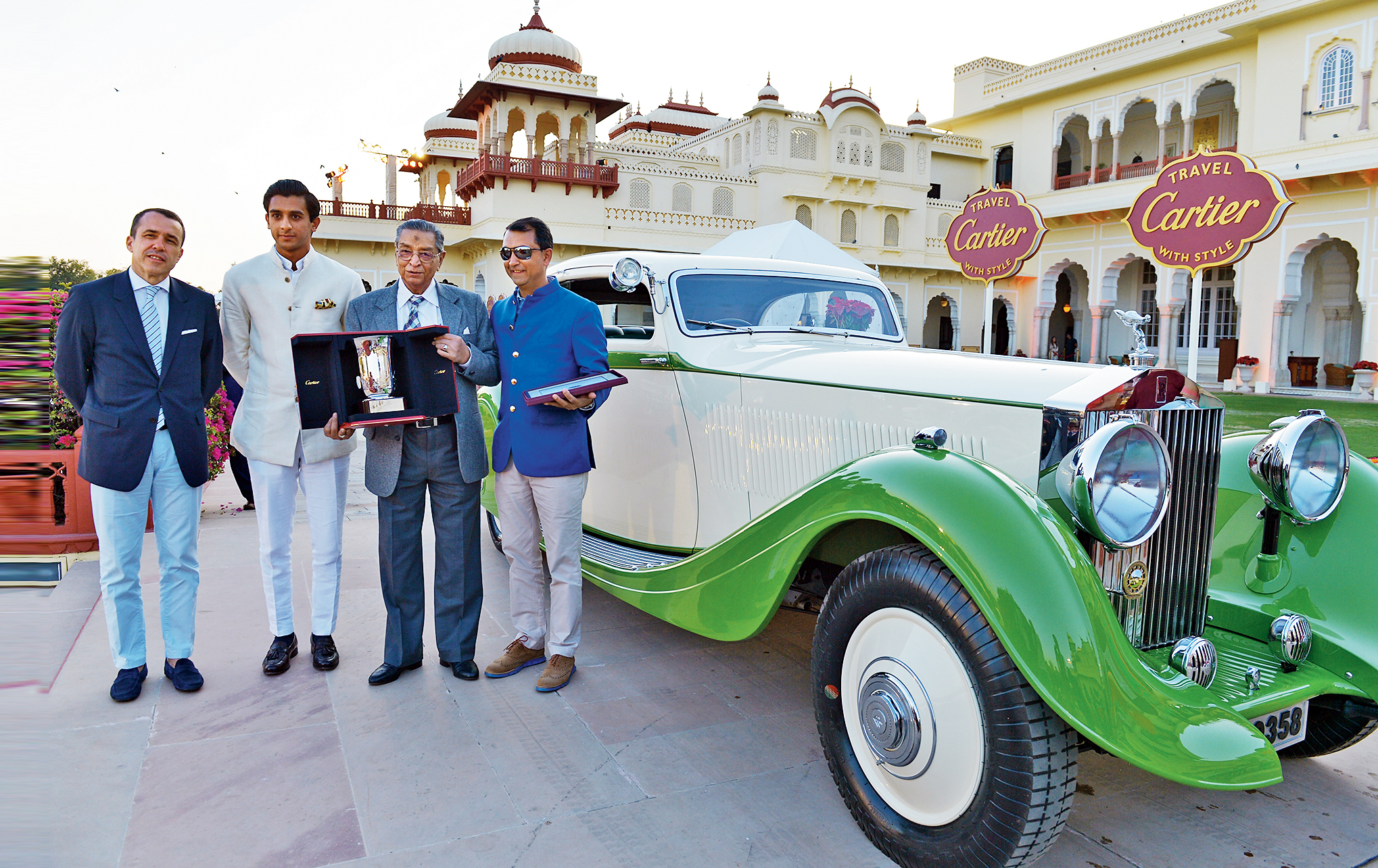 The 1935 Rolls-Royce Phantom II Continental with Gurney Nutting coachwork owned by Amir Jetha (extreme right) from Mumbai was given the Best of Show prize for cars at Cartier Travel With Style Concours d’Elegance 2019 by (from left) Christophe Massoni and Maharaja Sawai Padmanabh Singh of Jaipur. After going through a few avatars, the car has been meticulously restored to the original specifications in which it was ordered by the Maharaja of Jodhpur. 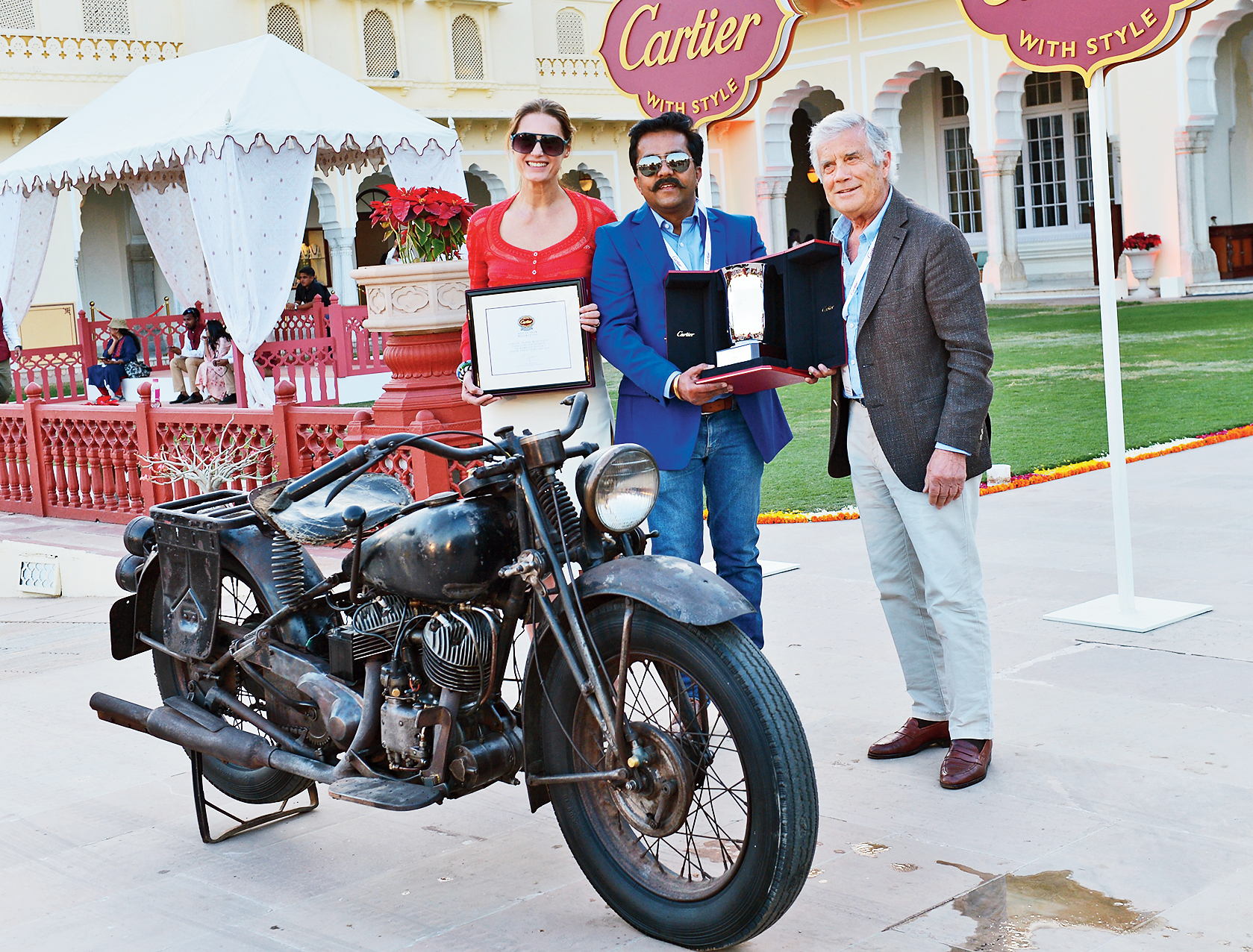 Sandeep Kapoor (centre) won the Best of Show for motorcycles with his 1940 Indian Junior Scout. Handing him his prize were former model Yasmin Le Bon and the record holder for the maximum number of motorcycle world championship wins, Giacomo Agostini, the judges for the motorcycle category. 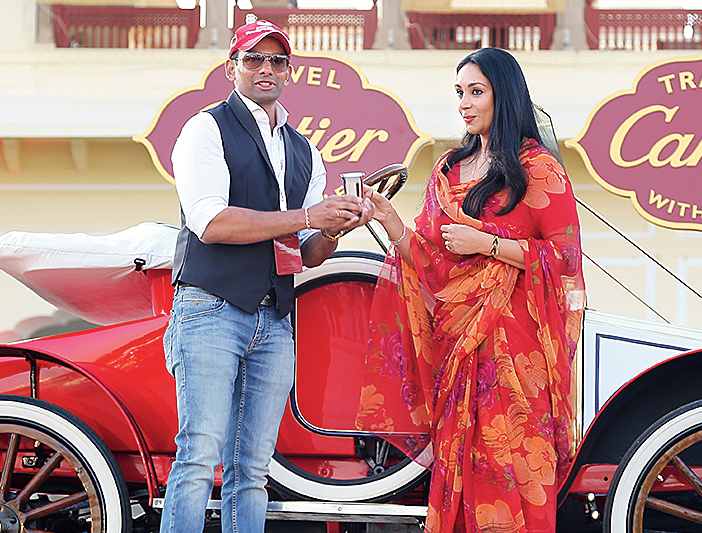 Princess Diya Kumari of Jaipur presented The Judges Award to the 1906 Renault 8hp owned by Shrivardhan Kanoria from Calcutta. 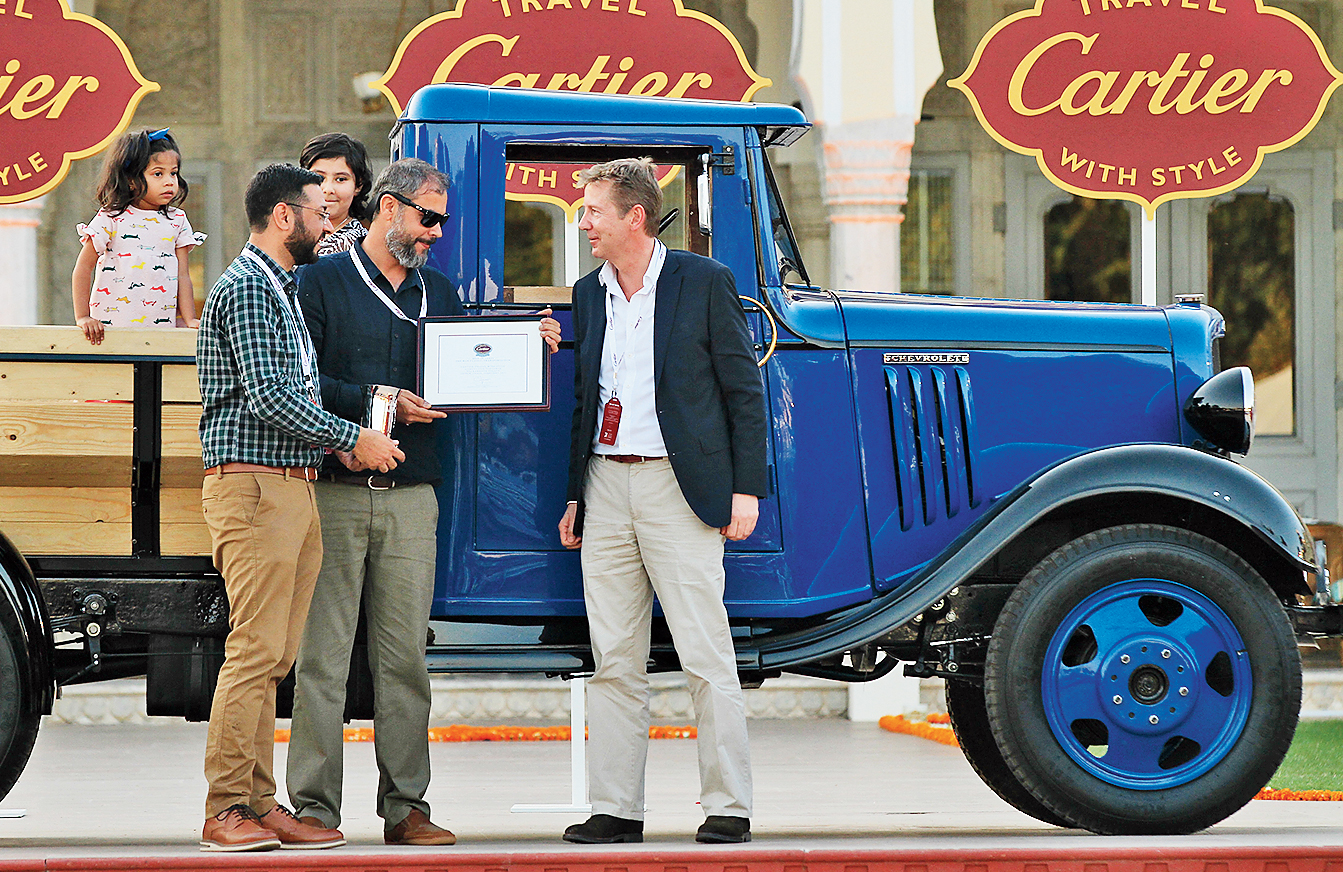 Patrick Mark (right) gave away the Best in Class for Pre-War Classic Transportation to Kaizad Engineer (centre) from Mumbai for his 1934 Chevrolet Half Ton Series PA that he literally dug out of the ground and fully restored in less than a year. 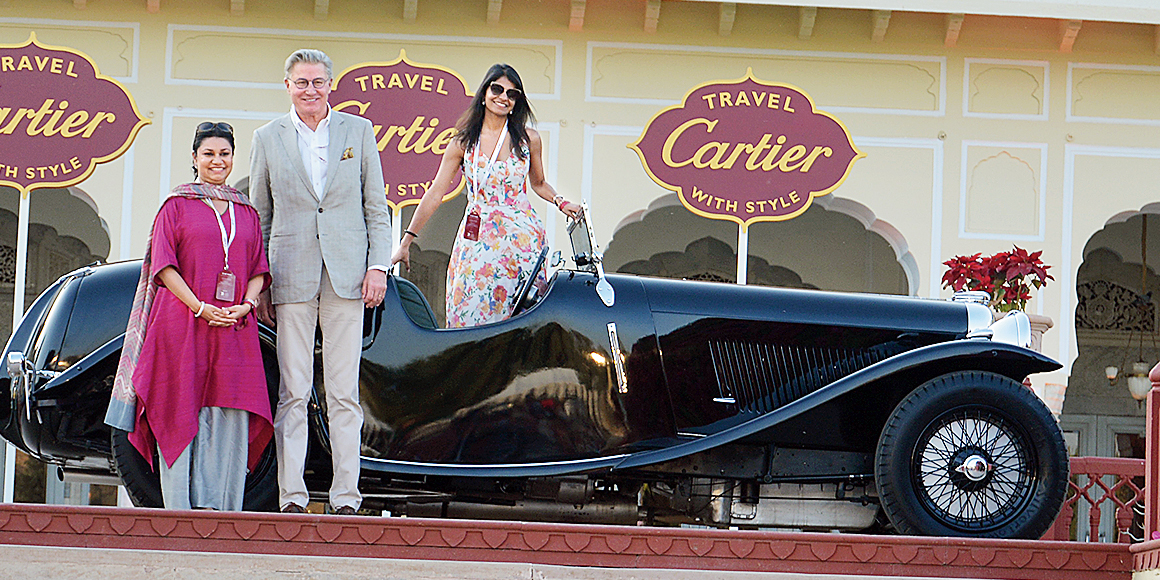 Ragini Sanghi (left) and Jyotsna Sanghi (right) take their prize in Pre-War European class for their 1934 Lagonda M45 Rapide from William E. Connor, one of the judges. 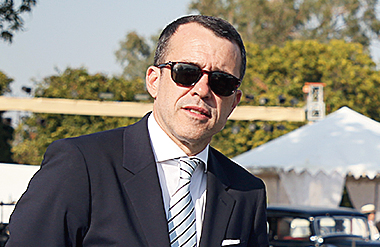 This has been another beautiful edition of Travel With Style with Cartier. We are bringing back a lot of memories through these beautiful old cars. Behind each car there is a story and we are bringing beautiful memories back to life and are very happy to be part of it. This is a very unique experience and we are paying tribute through it to the aficionados of cars — Christophe Massoni, CEO, Cartier Middle East, India & Africa 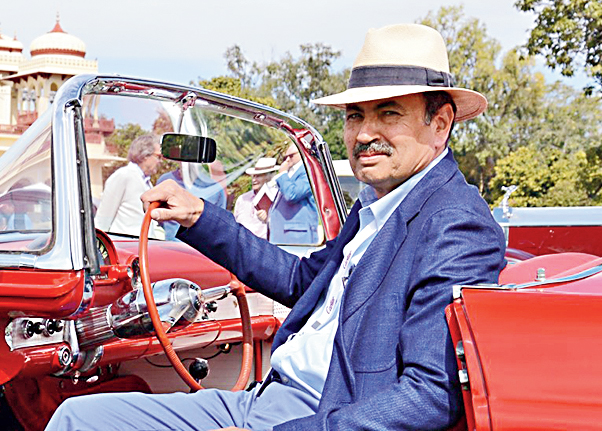 I owe a lot to this country and there are a lot of cars still to discover. Maybe I was 50-60 per cent down, but then this Transportation Class came along. Nowhere will you have it. The international press will probably laugh at me initially, but this is a purely Indian class which I am trying to save for this country’s heritage — Manvendra Singh of Barwani, curator, Cartier Travel With Style Concours d’Elegance 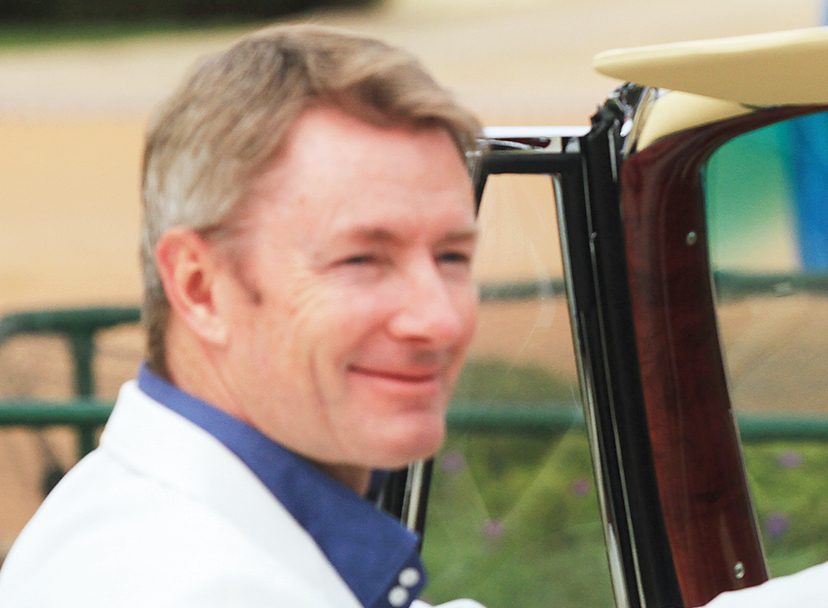 The standard of restoration has come up. There is an appreciation that not everything needs to be restored. Some of the best restorations are on a par with what we do in Europe and the States. So they owe nothing in terms of standard to the best in the West. And there has been a fantastic turnout, probably the biggest and the best we’ve had so far — Simon Kidston, chief judge, Cartier Travel With Style Concours d’Elegance 2019
Cartier Travel With Style Concours D'Elegance Rambagh Palace Pre-War Transportation Class Cartier
Share
Advertisement
Advertisement
Advertisement
Copyright © 2020 The Telegraph. All rights reserved.