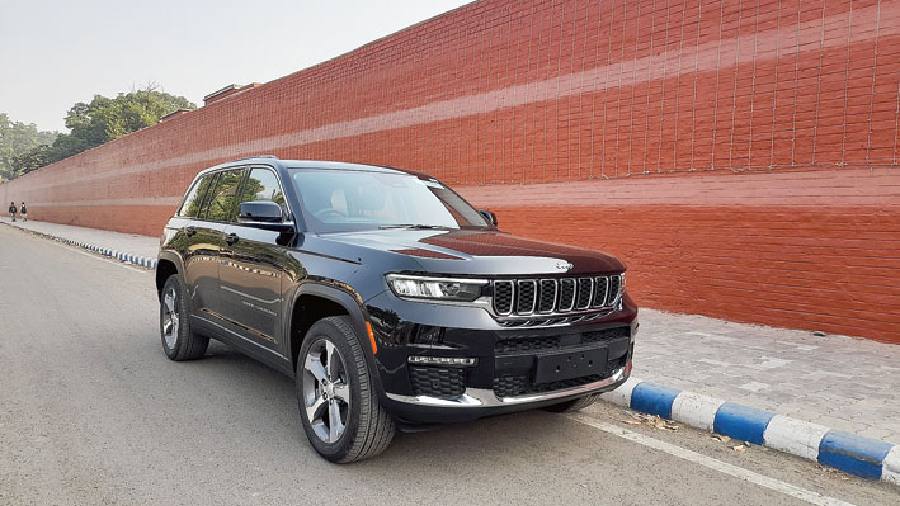 Give a child and ask him/her to draw a ‘Jeep’ and what you will get is most likely get is the profile that would be pretty close to that of a Jeep Grand Cherokee. It is the quintessential SUV that is now into its fifth generation and that is what Jeep India rolled out earlier this month.

The moniker carries a legacy of seven million vehicles and the current model will be assembled in India completely. That will keep the prices more reasonable — at Rs 77.50 lakh before levies and taxes — for the only version of this model, ‘Limited O’, that is available in India.

The Telegraph borrowed a vehicle from Celica Jeep in Kolkata to get a feel of this SUV that is developed with the American ethos in mind and, to that extent is big and spacious and comes with pretty impressive go anywhere credentials as well. Unfortunately, we were not able to really give the last a check since will need very specific kinds of terrain and pretty much none of that is available in Calcutta. Yes, that will be a shortcoming of this driving impression, but then there’s lots more to talk about. So, here goes.

The new Jeep Grand Cherokee is a big five-seater SUV that is just short of 5m in length.
THE EXTERIORS

The Grand Cherokee is immediately recognisable as a Jeep with its seven-slat grille. What also comes through immediately is that on is looking at a really big vehicle. This one just under five metres long and a shade under two metres wide. It is built on a brand new architecture and also has a grille that’s a little canted in front, giving a bit of a lip to the top edge.

The SUV is quite boxy and the absence of too many curved panels somehow makes it look quite purposeful and no-nonsense. It is conservatively designed but has the cues that convey its purposefulness. There are the squarish wheel arches and short front and rear overhangs that allow it to go over sudden rises in the terrain. It also has a ground clearance of about 215mm, which can pretty much deal with most of the stuff that it might be called upon to go over. Couple that with a more than half metre wading depth, and you are looking at a very capable off-road vehicle.

It does however fit the understated luxury brief as well with judicious use of chrome and well designed headlamps and taillamps. The 20-inch, two-tone polished alloy wheels play their part in adding to the look. It doesn’t scream bling, but still remains smart and looks confident of its capabilities.

Over the previous model, this one has more cabin space. With so much room to play around with there is a great deal of legroom for the second row passengers who also get heated seats, one of the few vehicles in India that has this facility along with heated steering that is rather nice to hold in chilly weather. This is one vehicle in which the middle passenger in the rear seat will have little to complain about.

The front seats are generous and very well cushioned. Even after driving around for a few hours constantly, one did not feel strained. This seat is warmed too, just in case it is needed. The dashboard has nothing sticking up from it and gives a clean view out of the car, again something useful for offroaders. We also liked the overall design of this element.

The front passenger also gets a separate LED screen where he can watch his preferred programmes.

There are accessory screens available that can the fitted for the rear seat passengers as well and with headphones one can have a full entertainment system that doesn’t bother the driver.

The layout of the passenger compartment is wide and airy and Jeep hasn’t towed the usual line of the high middle screen, helping with visibility on the driver’s far side

The view that the driver gets is pretty clean and unobstructed. The seats and steering can be warmed in cold conditions.

The engine is set well back in the bay and adds weight towards the centre of the vehicle, making it more stable in offroad situations.

(l-r) The stance of the Grand Cherokee is wide and planted and suitably high and it’s easy to believe that it can tackle offroad terrain quite easily, particularly with its 4x4 and electronic assistance systems.
ON THE ROAD

On the road the Grand Cherokee feels big initially but is a very comfortable piece of kit that insulates passengers from the surface the vehicle is driving on. That said, the feel through the steering is pretty good and one always aware of what is going under the wheels. The car is cool in both city crawls and highway speeds. Considering that the engine is not-too-big turbocharged petrol we were a little sceptical how well it would haul this two-tonne vehicle. (We are usually used to diesels here.) But the mille not only impressed with its smoothness, but also with the amount of low-end grunt it produced and how effortlessly it moved the vehicle.

As we mentioned earlier, we did not try out the off-road capabilities, but this is some of what it comes with. Its SelecTerrain System gives maximum traction and features Sand/ Mud, Snow, Auto, and Sport modes. On tarmac, we chose Sport and that livened up the drive significantly and made the SUV more responsive to inputs.

The Quadra-Trac I 4x4 system is always engaged. Jeep says it requires no buttons or levers, and is combined with a brake lock differential.

That apart there is Advanced Driver Assistance Systems (ADAS) that we experienced when we went too close too fast in bumper-to-bumper city traffic. It works for sure. It has intersection collision assist too.

An interesting bit of kit is the toggle in the rear view mirror that switches to a rear camera from normal mirror. It is quite nice and clear to use. It makes backing up the car much simpler and the angle too can be moved up or down.

The long wheelbase and five-seat combination translates into oodles of legroom for the rear passengers.

The front seats are very comfortable with just the right amount of give to be comfortable on long drives.

An interesting feature is that one can toggle to a view of a camera mounted below the rear spoiler in the internal rear view mirror.

Boot space is generous at over 1,000 litres and without inconvenient intrusions. Also, the spare wheel is easily accessed by lifting the boot floor.
THE CALL

Very few people who buy any off-road capable SUV ever actually get around to taking them off the road or do so on rare occasions. But then, the capabilities that get a vehicle out of the mud could well prove to be the saviours even on metalled roads. This one comes with Jeep off-road cred. And it is luxurious to boot with the full complement of safety features thrown in. Does one really need more?

THE NEW GRAND CHEROKEE IN NUMBERS