Obama relishes throwing punches at Trump on behalf of Biden

The former president's return to the trail is driven by a desire to help Biden in any way he can, according to friends and Democratic aides 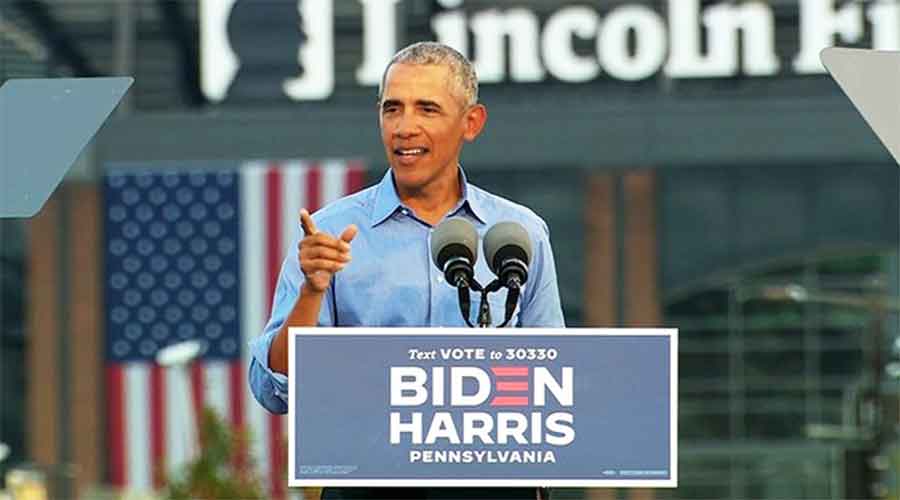 Former President Barack Obama bounded off the stage in Philadelphia last week after his debut as Joseph R. Biden Jr.’s 2020 battering ram and pronounced himself pumped — and even a bit delighted at the chance to troll his troll, President Trump.

“Oh man, that felt good,” Obama told a friend in a phone call — and he let Biden’s staff know that the ungainly format of the event, a “drive-in rally” where he addressed hundreds of supporters in cars in a stadium’s parking lot, had worked surprisingly well, according to several people close to the former President who spoke on the condition of anonymity to discuss private conversations.

In 2016, Obama took his whacks at Trump on behalf of Hillary Clinton. Then he stepped up his criticism of his successor during the 2018 mid-term elections. This summer, during the virtual Democratic convention, he offered a damning jeremiad against the President, warning that Trump’s re-election would “tear our democracy down.”

But nothing Obama has said during the Trump era compares with his gleeful slag-heaping of scorn upon Trump in the closing days of the 2020 campaign, part of a two-week burst of activity that will culminate in a joint rally with Biden being planned for this coming weekend, according to Democratic officials.

“What’s his closing argument? That people are too focused on Covid?” Obama said on Tuesday at an Orlando rally intended to energise voters in Florida, a perennial neck-and-neck battleground and Trump’s adopted home state. “He said this at one of his rallies. ‘Covid, Covid, Covid,’ he’s complained. He’s jealous of Covid’s media coverage.”

Trump was apparently watching. And he complained about how much media coverage Obama was getting. “@FoxNews is playing Obama’s no crowd, fake speech for Biden, a man he could barely endorse,” Trump tweeted at the 21-minute mark of his predecessor’s speech.

Obama’s return to the trail is driven by a desire to help Biden in any way he can, according to friends and Democratic aides.

He has already lent his name to about 50 fund-raising emails on behalf of Biden and other Democrats, in addition to cutting get-out-the-vote ads appearing in 15 swing states and raising millions of dollars through online fundraisers.

Above all, he has been eager to reverse roles with his loyal helpmate, these allies and associates say, and willing to throw punches that would undermine the former vice- president’s image as a national healer if Biden took the swing himself.

It has also allowed Obama to have fun at a time when many Biden supporters have been anxiously following state polling averages in fear of a second Trump surprise. Obama is clearly relishing the chance to strike back at Trump, who has not only baited him for years but has also tried to eradicate his legacy, policy by policy.

“He’s plainly having a good time out there — like a guy with a lot of material to work with who’s been waiting a long time to share it,” said David Axelrod, a longtime campaign and White House adviser to the former President.

Obama kicked off the Philadelphia rally by giddily referring to a recent New York Times report that detailed previously unknown financial holdings of the President’s in China and other foreign countries.

“Can you imagine if I had a secret Chinese bank account when I was running for re-election?” Obama asked after ridiculing lower-than-expected recent TV ratings for the President and mocking him for contracting the coronavirus after flouting safety measures.

“They would’ve called me Beijing Barry.”

At his second rally, on Saturday in a Miami parking lot, Obama went after Trump with an ear-to-ear smile that at times gave way to raw-nerve rage.