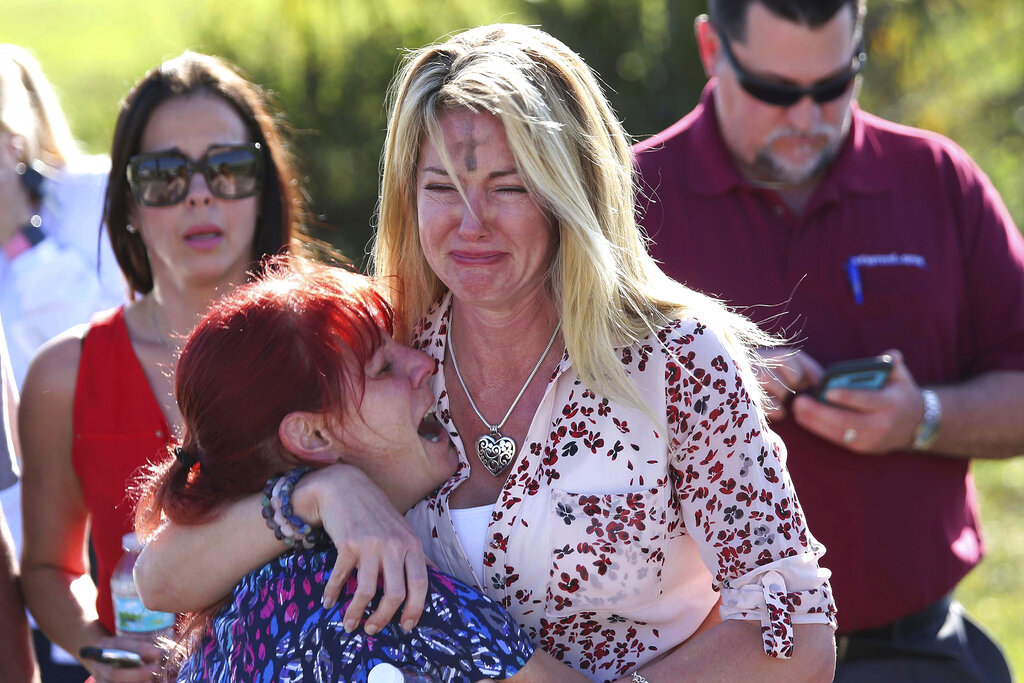 In this February 14, 2018, photo, Mechelle Boyle (right) hugs Cathi Rush as they wait for news after reports of the shooting at the Marjory Stoneman Douglas High School in Parkland, Florida. The image become emblematic of the Parkland school massacre.
AP
AP   |   Parkland (Florida)   |   Published 12.02.19, 09:55 AM

It's an image that has become emblematic of the Parkland school massacre: two terrified moms outside Marjory Stoneman Douglas High, one of them a tall, weeping blonde with the black smudge of Ash Wednesday on her forehead, the other a petite redhead crying in despair on her shoulder.

But the bond in that widely seen photograph didn't survive long. The two women soon found themselves at odds — like the nation itself — over gun control.

The redhead was Cathi Rush, who was desperately waiting on February 14, 2018, to find out whether her 14-year-old son Brandon was okay. The blonde was Mechelle Boyle, whose three children did not attend the high school and were safe. The women comforted each other in a moment of anguish captured in a searing Associated Press photograph.

'My heart just started breaking,' Boyle recalled in an exclusive interview with the AP as the anniversary approached. 'Oh, my God, she doesn't know if her son is alive or dead. She's here crying and can't reach him.'

Brandon made it out alive. But on that day, Rush was desperately trying to get in touch with him, knowing only from a few texts that the freshman was hiding under a table. She hadn't heard from him in nearly an hour as she stood there amid crying parents, the wail of sirens and the chop of helicopters.

Overcome with agony, Rush fell to the ground, screaming. Boyle, a longtime acquaintance, pulled her up and into an embrace — the image that was snapped by AP stringer Joel Auerbach and would appear on websites, front pages and broadcasts around the world as details emerged of the 17 students and staff members killed.

After the photo came out, Boyle turned down all interview requests from the media until now, saying she didn't lose a child and didn't feel she had anything to say. 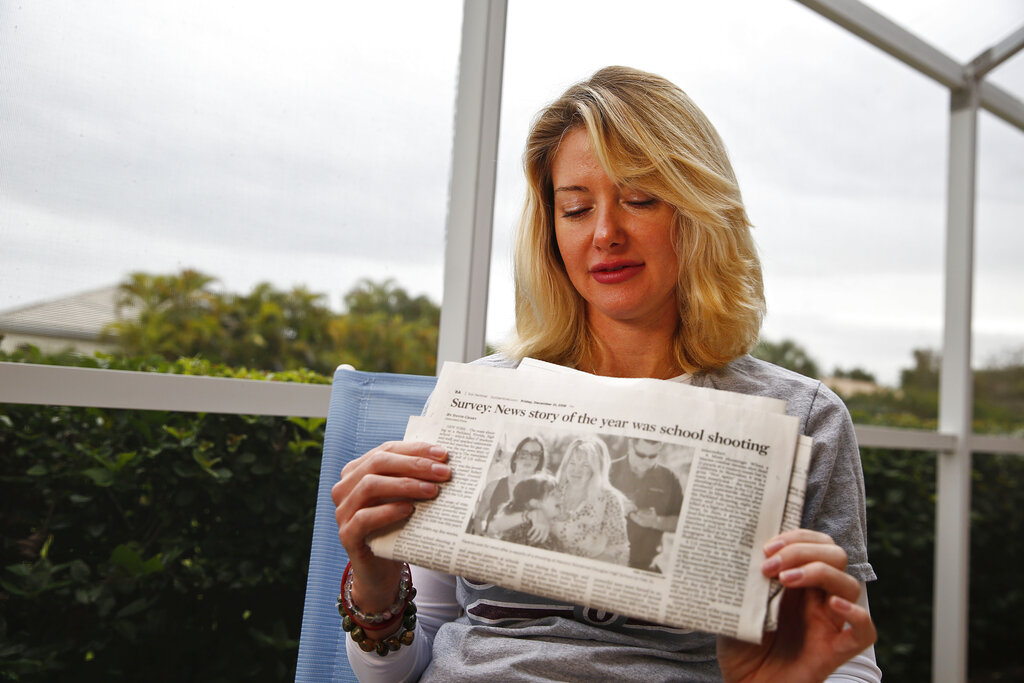 Mechelle Boyle holds a newspaper with the iconic photo from the school shooting. “The terror that we felt, I see it on my face every time I look at the picture,” she said.
AP

Rush, 47, appeared on CNN a few days after the rampage, saying she hated the image and felt the photographer had intruded on a private moment. She has since come to embrace the image.

She had the photo printed on sweatshirts that the family wore to the March for Our Lives rally in Washington and carried a big banner bearing the image. She made it her Facebook profile picture for a time, hoping it would spur change.

Rush, a school nurse, wants to see stronger gun control laws. She attended a few meetings of the organisation Moms Demand Action but found the activism only traumatised her.

Boyle, too, turned to Moms Demand Action and has attended every school board meeting since the shooting. The 42-year-old owns a gun and served eight years in the military. She supports gun rights but has also worked to pass stricter gun control laws in some cases, saying it 'made no sense to me' that the gunman was able to buy an AR-15 rifle at age 18.

'The terror that we felt — I see it on my face every time I look at the picture,' Boyle said through tears. 'I don't ever want any parents to feel that ... watching them grieve and bury their children.'

Before the tragedy, the two women were never close but always friendly. Their kids had gone to the same elementary school. Rush's ex-husband coached Boyle's son's soccer team. 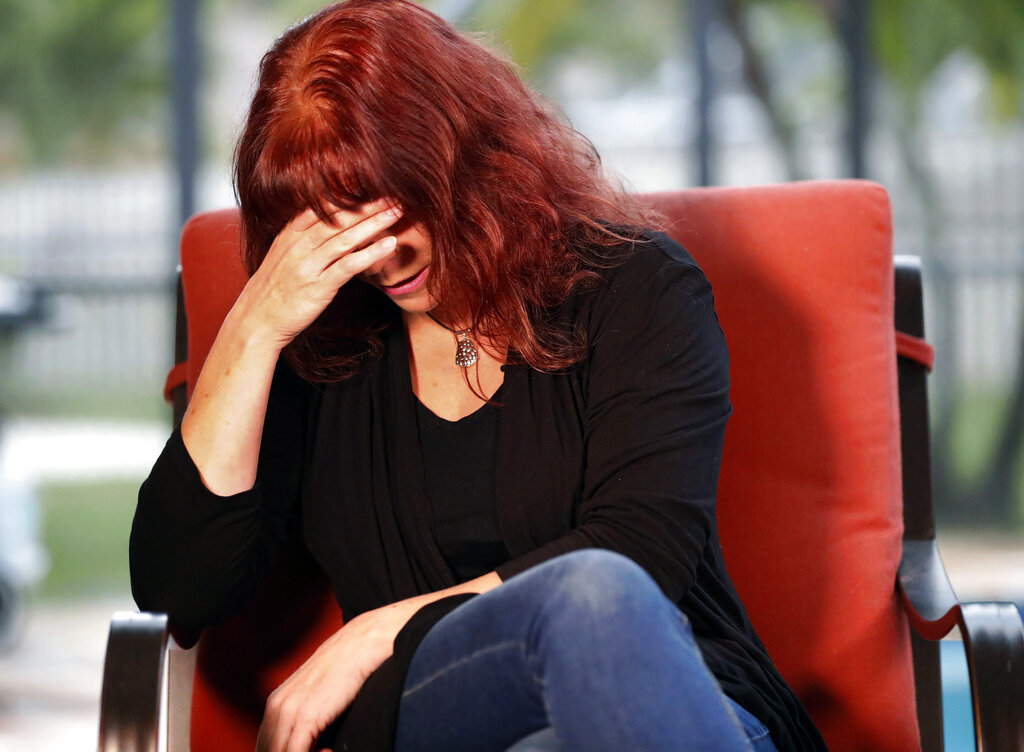 Cathi Rush breaks down as she speaks during an interview with AP at her home in Coral Springs, Florida.
AP

A year after the shooting, they are no longer in contact. Rush declined to be interviewed with Boyle, saying she disagreed with her on gun control and politics.

Boyle said that she texted Rush a couple of times last year to check in, but that they haven't kept in touch on social media or in real life.

'She was very upset at me because I was a little more pro-gun than her, and she wasn't very happy about that,' Boyle said. 'I definitely pushed for laws, and I definitely said we need stronger laws, but I guess for whatever reason we really didn't stay friends on Facebook or anything.'

Rush, a fiery woman with a wry sense of humour, said shooting didn't unite the community, as some said or hoped; it did the opposite. 'This community has fractured into two factions now,' she said — those who are trying to turn schools into 'fortresses' and those who want to crack down on guns.