Trump pressured Ukraine President to investigate Democrats as ‘a favour’ 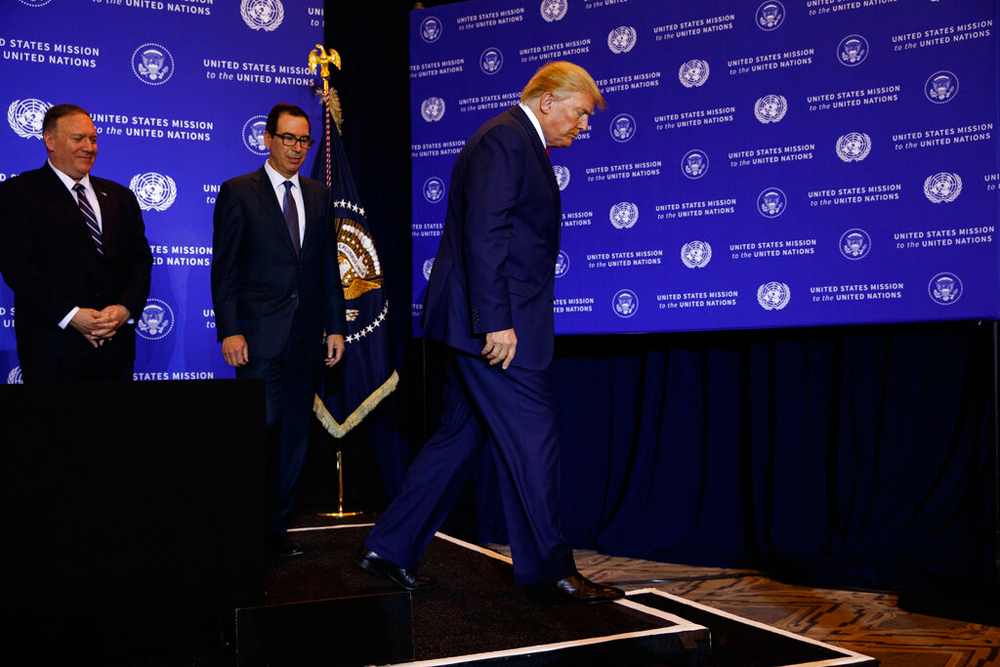 President Donald Trump repeatedly pressured Ukraine’s leader to investigate leading Democrats as “a favour” to him during a telephone call last summer in which the two discussed the former Soviet republic’s need for more American financial aid to counter Russian aggression.

In a reconstruction of the call released by the White House on Wednesday, Trump urged President Volodymyr Zelenskiy to work with attorney general William Barr and Rudy Giuliani, the President’s personal lawyer, on corruption investigations connected to former Vice President Joe Biden and other Democrats.

Although there was no explicit quid pro quo in the conversation, Trump raised the matter immediately after Zelenskiy spoke of his country’s need for more help from the US. The call came just days after Trump blocked $391 million in aid to Ukraine, a decision that perplexed national security officials at the time and that he has given conflicting explanations for in recent days.

The aid freeze did not come up during the call and Zelenskiy was not yet aware of it. Instead, he thanked Trump for previous US aid and suggested he would need more as part of Ukraine’s five-year-old war with Russian-backed separatists in the country’s east.

“I would like you to do us a favour, though,” Trump responded, shifting to his interest in investigating Democrats and urging that he work with Barr and Giuliani.

“Whatever you can do, it’s very important that you do it if that’s possible,” Trump said.

The July 25 call has become a major flashpoint in what is rapidly shaping up as a divisive battle between the President and House Democrats over impeachment that will consume Washington for weeks or months. The conflicting interpretations of the call’s meaning began to define the contours of a debate that would seek to determine whether the President committed high crimes and misdemeanours.

In a series of public appearances on Wednesday that veered from bristling with anger to uncharacteristically subdued, Trump insisted he did nothing wrong and was once again the victim of “a total hoax.” Zelenskiy, who by an odd coincidence was in New York for a previously scheduled meeting with Trump, backed him up by saying during a session with reporters that he did not feel pushed by the President.

“It’s a joke,” Trump said. “Impeachment for that?”

But House Democrats denounced Trump for seeking foreign help to tear down Biden, a leading rival for his job, and said the quid pro quo was implied and clear, comparing him to a mob boss who makes veiled hints to extort money from his victims.

“The President has tried to make lawlessness a virtue in America and now is exporting it abroad,” Speaker Nancy Pelosi said.

The White House released the reconstructed transcript of the call in the morning in hopes of undercutting suspicions about the President’s actions but it failed to convince Democrats. By the end of the day, the administration similarly sent Congress the original complaint filed by an unidentified intelligence official that triggered the furore that in just a matter of days has put the future of Trump’s presidency at risk.

The complaint reportedly calls into question a range of actions by the President beyond just the phone conversation. Democrats and at least one Republican who reviewed it on Wednesday said it contained disturbing allegations. The complaint, while still classified, will be the central issue on Thursday when Joseph Maguire, the acting director of national intelligence, testifies before Congress.

The administration dropped its resistance to providing the complaint to lawmakers in the face of a vote planned by House Democratic leaders condemning its handling of the matter. By backing down, Trump made it possible for Republicans to go along with the resolution, which all but two did later in the day.

For Trump, keeping Republicans in his corner is more important than winning over Democrats, most of whom White House aides consider unmovable at this point. As of Wednesday, 218 House members have publicly advocated impeachment or at least an inquiry, reaching a majority for the first time after more than 70 declared their support since Monday.

Pelosi does not seem ready to test her members’ resolve, though, planning to move forward with an inquiry without a vote on the floor to authorise it, as was done in the past two presidential impeachments. And even if the House did ultimately impeach Trump, it would require a two-thirds vote by the Senate to convict and remove him from office, meaning at least 20 Republican senators would have to decide he was guilty.

Few Republicans broke with Trump on Wednesday. Senator Mitt Romney of Utah called the record of Trump’s phone call “deeply troubling” but most others who spoke publicly said it revealed no impeachable action.

“From a quid pro quo aspect, there’s nothing there,” said Senator Lindsey Graham, Republican of South Carolina, a Trump ally who served as a House prosecutor during the impeachment trial of President Bill Clinton in 1999.

Democrats said no direct quid pro quo was necessary to conclude that the President overstepped his bounds. But even if it was, they said Trump’s meaning was hard to miss and the timing of the request to Ukraine coming just after he put the aid on hold was damning.

“There was only one message that that President of Ukraine got from that call and that was: ‘This is what I need, I know what you need,’” said Representative Adam Schiff, Democrat of California, chairman of the House Intelligence Committee. “Like any mafia boss, the President didn’t need to say, ‘That’s a nice country you have — it would be a shame if something happened to it.’”

Biden said that the House should “hold Donald Trump to account for his abuse of power”, although he did not directly call for impeachment. “It is a tragedy for this country that our President put personal politics above his sacred oath,” Biden said. “He has put his own political interests over our national security interest, which is bolstering Ukraine against Russian pressure.”

For Trump, the sudden turn of events has recast the remaining year of his term before next year’s election, seemingly all but dooming chances for bipartisan legislation. He castigated Democrats for focusing on this “nonsense” instead of gun control or trade.

And he expressed surprise that impeachment was now back on the table after the threat seemed to fade following the report on Russian election interference by special counsel Robert Mueller. “I thought we won,” the President said. “I thought it was dead — it was dead.”

He blamed Pelosi, who until this week had been reluctant to pursue impeachment, which so far does not have the support of most Americans. “She’s lost her way,” Trump said. “She’s been taken over by the radical Left.”

He also tried to turn the tables on Democrats, arguing that Biden was the one who was really corrupt and even citing a letter written by three Democratic senators last year to Ukraine’s prosecutor, urging cooperation with Mueller. That letter, however, was written out of what the senators said was concern that Ukraine would be intimidated from cooperating by Trump’s wrath.

The call between Trump and Zelenskiy took place just a day after Mueller testified before Congress and the issue was clearly still on Trump’s mind. Mueller reported that he did not find sufficient evidence to prove a criminal conspiracy between Trump’s campaign and Russia, though he identified actions by Trump that could be construed as obstruction of justice.

Feeling that he had survived the special counsel probe, Trump apparently wanted to turn the tables and prove that it was illegitimate to begin with. In his discussion with Zelenskiy, he pressed the Ukrainian leader to use Barr’s help to investigate a company involved in the beginnings of the Russia inquiry.

Trump also pressed Zelenskiy to open an investigation of Biden and his younger son, Hunter, who sat on the board of a Ukrainian energy company, asserting that the former Vice President forced the dismissal of a Ukrainian prosecutor to benefit the company’s owner. Neither claim has been borne out by evidence but both held the potential to benefit the President politically.

Trump did not directly condition any aid or support on Ukraine following through, but he did start the call but noting how generous he believed he had been. “The United States has been very, very good to Ukraine,” he said. “I wouldn’t say that it’s reciprocal necessarily.”

Sitting side by side with Trump in their first face-to-face meeting on Wednesday, Zelenskiy told reporters that he wanted to stay out of US politics but provided a benign interpretation of the call.

“We had, I think, a good phone call,” Zelenskiy said. “It was normal; we spoke about many things. So, I think, and you read it, that nobody pushed — pushed me.”

“In other words, no pressure,” Trump chimed in. “And by the way,” he added, addressing a reporter, “you know there was no pressure.”